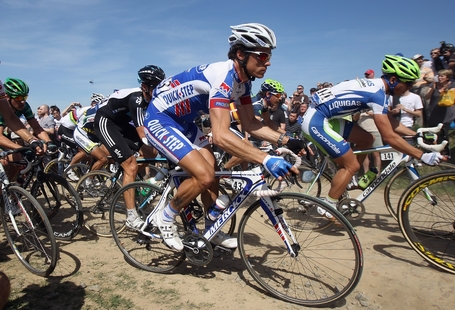 What's in a brand? That's a pretty good question at Team Lefevre these days, as his Quick Step franchise has been on the receiving end of a pretty big realignment in the last few years. Having inherited some tattered remains of the historically awesome Mapei franchise and replicated its success nicely for a few years -- even augmenting the Belgian identity of the team with some highly successful Italians, straight out of the Squinzi playbook -- Quick Step have been synonymous with a steady diet of wins, starting in the desert sands and continuing at such a clip throughout the spring that you hardly cared what happened in July. And that is the true measure of greatness: a team that can afford not to kill it at the Tour.

On the world points scale, those mid-decade Quick Step teams were inscribed into the stone tablet marked "World's Top Five Cycling Teams." There was no deleting them, not as long as Tom Boonen and Paolo Bettini were around to keep them awash in points. Hell, in 2006 Boonen alone was good enough to be the world's 26th ranked team, just a notch behind Barloworld. Bettini was a top-20 guy for over a decade, peaking at #1 in 2003. These guys were cold cash money, and all manager Patrick Lefevre had to do was round up some reasonably priced complementary parts -- Rogers for some GC placings, or Pozzato as the loyal understudy, or Devolder (or Nuyens or whomever) as the dangerous decoy -- and the Belgian fans were tap-dancing across their Quick Step flooring all spring... and maybe into summer.

Those were the days...

Now Quick Step are coming off two seasons ranked 17th in the world, the last one spent adrift in sponsorship hell, and in an awkward ongoing conversation about where things were headed. It's tempting to say that, with several big questions resolved, things are bound to get better, but mostly because they can't get any worse. Maybe it wasn't entirely fair to label them a one-trick pony as if that's all they aspired to be -- Lefevre has chased his share of Grand Tour guys, for starters. But the results don't lie: the team ranked a mere five riders in the top 160 last year, all (arguably) classics specialists except Dries Devenyns. It's becoming clear that the Quick Step brand of the past decade has grown terribly stale, and whatever evolution was/is waiting for this team in their master plan to return to greatness, it didn't go into effect in 2011.

Here's how I put it:

Lefevre has assembled a somewhat reinvigorated roster of classics guys in need of a change of shirt. Coming in are Niki Terpstra, Marco Bandiera, Gerald Ciolek and Francesco Chicchi, all reasonably young guys with talent and something to prove. If none come through, so be it, but as opposed to the enigmatic Devolder (Vacansoleil) and somewhat restless Wouter Weylandt (Lux), Quick Step should experience a bit more positive energy on the team bus. ... Expectations and pressure should be a bit more manageable, and if April doesn't go too well, they've at least increased their sprinting firepower enough to bag a few extra wins.

But the warning signs are still there. Quick Step haven't rounded things out at all. With a new sponsor just coming on, perhaps the plan will change in the next transfer season. Another issue worth mentioning is that the best young Belgians don't seem to be landing on their doorstep. This time it's Yannick Eijssen headed to BMC instead. I don't know if there was a backstory involving Quick Step, and in the past Lefevre has allowed kids to go train somewhere else, preferring to sign them as they hit their primes. But in need of someone to build around besides Boonen, Lefevre isn't harvesting the local talent very well.

I got a sound thumping from Vlaanderen90 on that last point, which is what happens when you start talking about U23 Belgians you've never actually heard of. The consensus seemed to be that Quick Step were trying to branch out more, and trying to bag the top young talents, and if you took a realistic viewpoint it wasn't so bad. But a shaky sponsorship outlook was dimming the long-term prospects considerably. And Boonen wasn't getting any younger.

A less inspiring of Quick Step 2010. Sylvain Chavanel did his best to rescue the entire season with a truly heroic effort in the Ronde van Vlaanderen, coming inches short of a victory for the ages... and the Sporza headlines. After that, Boonen won a forgettable Gent-Wevelgem, got outfoxed in de Ronde, had "one of those days" at Paris-Roubaix, and then crashed himself out of the Tour and the Vuelta, the latter ruining a (theoretically) decent shot at a world championship. Chavanel pulled himself together for the Tour, donning the tricolor after winning the French road title, but apart from a stage try en route to Pinerolo, nobody was letting him get away after two stage victories the previous year. A pretty typical event for Quick Step was when Niki Terpstra -- shrewdly signed away from the Milram scuttling -- crashed out of Driedaagse de Panne, depriving a thin Flanders team of a key deputy. That he crashed on the final time trial, a truly skippable event, is about as maddening as a spring crash gets. With good luck Quick Step might have papered over their deficiencies (lack of depth and breadth), but luck was on someone else's side this season.

The positive side of Terpstra's crash was the Ronde debut of Guillaume Van Kiersbulck in his national race (a respectable 67th) and a breaking-in season that was capped with victory in the Omloop van het Houtland in September -- one of the team's eight wins on the season. Another even more promising development was the team's top performer in Liege-Bastogne-Liege, one Kristof Vandewalle, whose 19th on the day bested Joaquim Rodriguez, Thomas Lofkvist, Robert Gesink and other big names. He got 16th in Brabantse Pijl too. Vandewalle spent most of his year abroad, making his grand tour debut in the Giro and Vuelta along with the Tour de Suisse, Tour of Beijing, Tour of Poland, and some Spanish rounds as well. Whatever you might think of the present, at least they started laying the foundation for a future.

Apart from missing out on Gilbert, who would have propelled them back to top-five status in a heartbeat, Quick Step have undergone a pretty big makeover, re-joining forces with former co-sponsor Omega Pharma. Gone now is the cloud hanging over the team's future and budget. The new OPQS squad got to work quickly in the transfer season (or had been already), snapping up several big names and top talents from the closed Highroad project and the splintered Radio Shack team. World Time Trial champion Tony Martin, Levi Leipheimer, and the Velits Brothers bring to the team a massive influx of climbing talent and experience compared to what they had, as well as the chance at a Tour de France finish of note in Martin and Levi. Peter Velits is also coming into his own, finishing 19th in his second Tour, which says much more about his glittering future than the dropoff in points from 2010.

The team did other nice things in the transfer season, adding key contributors like Bert Grabsch, Frantisek Rabon and Stijn Vandevberghe, while losing almost nobody of note, apart from a few talented kids (I'm told) like Jan Tratnik and Frederique Robert. Michael Kwiatkowski, coming off some nice early results in Driedaagse West Vlaanderen and De Panne, probably makes up for that loss. And then there's Styby, a/k/a Cyclocross World Champion Zdenek Stybar, donning the Quick Step colors in the mud and on the road, a nice favor to the cross world and team part-owner Zdenek Bakala.

It's getting to the point where Boonen can't be counted on to lead this team anywhere great again, though the Classics are remarkably kind to aging veterans, and as one of the all-time greats Tommeke will never be overlooked either. Nor should he. But the team's future will only be assured when they get off the narrow path Quick Step have walked the last few years. All signs point to those changes happening now, and to this team being very interesting to watch again, starting in less than a month.