CX Holy Week: Azencross Up Next

Share All sharing options for: CX Holy Week: Azencross Up Next 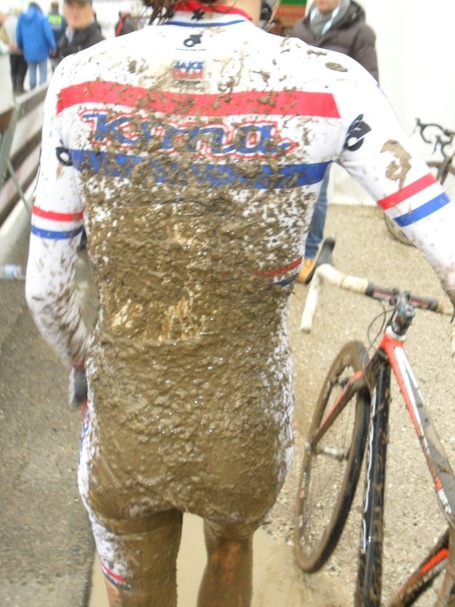 Things are getting tense in the muddy, chilly world of late-season Belgian/European cyclocross. Sven Nys has gone nearly ten days without a victory. Niels Albert is back on form, both physically and emotionally as his victory Friday and his whining at Lars Boom Monday both attest. Zdenek Stybar and Kevin Pauwels also righted their respective ships yesterday, giving us four heavyweights punching toe-to-toe at the moment, with Bart Wellens waving his arms for attention and Boom creeping up on his former rivals, back when he did Cross as more than a winter hobby.

Tomorrow is the next installment in the Cyclocross Belgian Mega-Week (known to some as the Christmas and New Year's holiday season). Up in Loenhout, Antwerp country, it's relatively flat, and the course consists of a few nasty little contours and gimmicks, like a bridge and a washboard section. All of this could make for a dull day if it were at all dry, but that's so very not the case...

Oh, and this is a Women's Race Day as well, with the elite chicas led by Vos, Cant, Van Passen, Wyman, Van Den Brand, Dombroski and everyone else you'd want to see (except Katerina Nash). Then there's the U23 kids, which means another chance to see why people are crazy about Lars van der Haar. Beloften go at noon CET, women at 1:30, men at 3.

It's a workers' cross, where the speeds won't reach dizzying heights but the heartrates sure will. There's not too much natural height difference, but there are handful of bridges (one that saw Nys have a positively ridiculous crash in 2009, flat on the tummy), a big staircase and some really kick-ass washboards.

Washboards are a bit silly, but in person I bet they're quite entertaining. Anyway, here's that 2009 running, complete with the Nys crash and mud along the lines of what we can expect tomorrow.