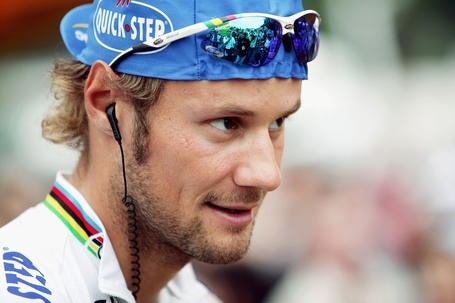 In yesterday's Offseason Capsule I detailed the nature of change underway at Quick Step -- across the board change from its ownership to the kind of riders the team will feature. The bottom line is, while the Classics will always be their bread and butter, the kind of all-in-on-the-cobbles model they ran so successfully for a few years could never have survived past, oh, 2010.

To recap, here's what the classics scene looked like mid-decade last. For simplicity's sake, I'll use the team ID of the winner from the primary cobbled events, Omloop - Dwars - E3 - Gent-Wevelgem - Ronde - P-R:

Note, in the table the Quick Step legacy would be known as Domo-Farm Frites in 2002, or maybe Mapei. Lotto-Domo took shape in 2003 while Quick Step-Davitamon came into existence from the ruins of Mapei and some bits of the Domo-FF guys who didn't switch over to Lotto. Regardless, Lefevre's squad as it's currently known dates back to 2003, for sure.

In 2004, Tom Boonen ripened into a classics stud, winning E3 and G-W, then doing the Double the following year, winning another E3, and watching Nick Nuyens take the Omloop. Another E3-Ronde in 2006, a bit light in 2007, then two straight team Doubles, before things started to unravel.

From Quick Step's perspective, it isn't hard to imagine them staying the course, if that were a realistic choice. Sure, we fans (and Belgian fans to a far greater degree) would likely have become restless with the same wins year after year, but an occasional defeat would have caused people to remember how much better it is to win the Ronde van Vlaanderen than to lose it. It's not hard to imagine the sponsors being OK with the same seasons, though who knows. Lefevre has never hidden his ambition to nurture a rider into the maillot jaune, but continued cobbled success would have given him adequate cover.

The problem with Quick Step remaining a dominant force in the classics isn't internal, it's the rest of the world which is getting in their way. Let's look at Quick Step's primary competition in the classics for this time period and see what's changed. These are painfully superficial, but bear with me.

2003: Lotto had Peter Van Petegem, and he delivered big, doing the Double of his own. Zabel was an occasional threat for Telekom, Fassa Bortolo had a too-old Bartoli and too-young Pozzato. Rabo had Freire and Wauters. Alessio's only card was Backstedt.

2004: Lotto had Van Petegem, Eeckhout and Leif Hoste, the latter being the Ronde star with his first near-miss. Telekom won with Steffen Wesemann while Backstedt scored his Roubaix breathrough for Alessio. Erik Dekker and Freire headed up Rabo. Fabian Cancellara drops a hint of future success with 4th in Paris-Roubaix. Hincapie leads Postal, who say hello to a young lad named Devolder.

2005: CSC comes into existence, but Cancellara is still at Fassa Bortolo , now joined by Juan Flecha. Rabo's threats (Dekker and Wauters) are getting long in the tooth. Lotto are semi-stacked with guys like Mattan, Van Summeren and Leukemans joining PVP. Marcus Burghardt joins Wesemann and Zabel at the Mob. Discovery start getting frisky in spring by adding Hoste to Hincapie and Devolder.

2006: CSC arrive with Cancellara and O'Grady starting a run of Paris-Roubaix brilliance, with Arvesen helping and Matti Breschel slowly growing up. Lotto are young and leaderless, if talented, as PVP nears the end. Lampre are just Ballan; Liquigas just Backstedt; Rabo mostly Flecha. Discovery are deep with Gusev, Devolder, Hammond, Hincapie and Hoste. The Mob have Burgy, Wesemann and Klier.

2007: CSC are still strong with the same cast. Lotto add Van Avermaet to the talent collection, plus Hoste as a leader. Langeveld arrives at Rabo with the two Spaniards, Flecha and Freire. Liquigas start looking interesting, adding Pozzato to Quinziato, Paolini and Backstedt. Lampre are Ballan with an assist from Bennati. T-Mobile go American and add Hammond, Ciolek and Eisel to Burgy and Klier. Discovery start knuckling under.

2009: Boasson Hagen looks solid for Columbia/HTC, who otherwise have Hincapie, Burgy and Eisel. CSC change to Saxo Bank, with the same guys getting older and (mostly) better. Boom and Nuyens arrive at Rabo, making a top-heavy squad with Flecha, Freire and Langeveld. Cervelo Test Team is born, bringing in Hushovd and Haussler from exile while paring Hammond and Klier from big classics rosters. Lotto are still behind Hoste, but add Gilbert to the mix of Roelands, Summie and Van Avermaet (while dropping Leukemans). Katusha are born, with Pozzato, Steegmans, Ivanov, Vandenberghe and others. Garmin are born too, with Maaskant arriving ahead of schedule.

2010: HTC lose Hincapie and Eddy Boss, but still win with Eisel. Saxo explode with Breschel and Cancellara and oodles of support. Katusha add Gusev (later) to the existing deep, Pippo-led squad. Rabo lose Flecha and remain young. Garmin look threatening with Maaskant, Farrar, and Van Summeren now too. CTT still have Hammond, Haussler, Hushovd and Klier. Vacansoleil are born with Leukemans and Hoogerland. Lotto still have Gilbert, Hoste, Van Avermaet and Roelands. BMC are born, with Hincapie, Ballan, Burgy and Kroon making an instant threat. Sky too join the fun, poaching Flecha and Boasson Hagen, and debuting a young Geraint Thomas. Lampre are out of the running but Liquigas reload with Quinziato and young Sagan.

2011: Garmin go BIG with Hushovd and Haussler joining Farrar, Maaskant and Summie. Saxo lose the big guns, but recover with Nuyens' stunning win. LeopardTrek are born, opening with Cancellara. Rabo add Breschel to its ripening squad (Boom, Langeveld, Freire). Sky get better with the same guys (Flecha, Boasson Hagen and Thomas). Marcato and Devolder bolster Leukemans and Hoogerland at Vacansoleil. Lotto are largely just Gilbert and Roelands, with Van Avermaet to BMC to help Hincapie, Burgy and Ballan. Goss starts playing big with Eisel at HTC. Liquigas and Katusha are still around.

Cycling teams are forever in flux, but I think you can safely say that Quick Step had a LOT less competition back in their early years. I don't have data to back this up, but all my dealings give me a qualitative sense that the English-speaking world is much more excited about the Tour of Flanders than it was a decade ago (you're welcome). This has given sponsors from outside the Big Four cycling countries further interest, which in turn gives guys like Vaughters and Riis and Lelangue license to stock up on classics studs. By 2010 Quick Step were thoroughly outgunned by Saxo Bank, and while Saxo split up after the season, Garmin gladly took up the Superteam mantle, while Leopard still had Superman and several other teams brought ever-deepening squads to Belgium in spring. Next year it's BMC's turn. And that's not even touching on the evolution of the athletes themselves, as more and more guys from outside Belgium turn their focus to the cobbles.

Quick Step can't keep up with well-funded challenges from all sides like they've seen in the last 3-4 years. They can't stay ahead of their rivals in transfer season, since there are too many threatening riders and almost none of them want to ride behind Boonen. Even if Lefevre wanted to maintain his sole focus on the classics (which he never has), it is simply not an option anymore. The best thing you can say about them now is that with Boonen's lack of sustained dominance, it's possible these swarms of heavyweight classics teams will start marking each other in 2012 instead of always parking on Boonen's wheel. Quick Step are still a pretty big part of the conversation, and with a level playing field, maybe the fun quotient will be on the rise next year.