Boonen and friends: a day at the charity races

Share All sharing options for: Boonen and friends: a day at the charity races

I don't own a gps, nor a mapbook. I look up directions on google maps, jot down some notes, jump in my car and usually get lost somewhere along the way. This is ok, I like getting lost. It takes you places you never meant to go. Sometimes I hope I'll run into a big bus of mad Tombo fans, and I'll only have to follow it to make it to his charity cross race. Sometimes I figure I'll accidentally stumble onto the location. Sometimes, I bank on there being directions. 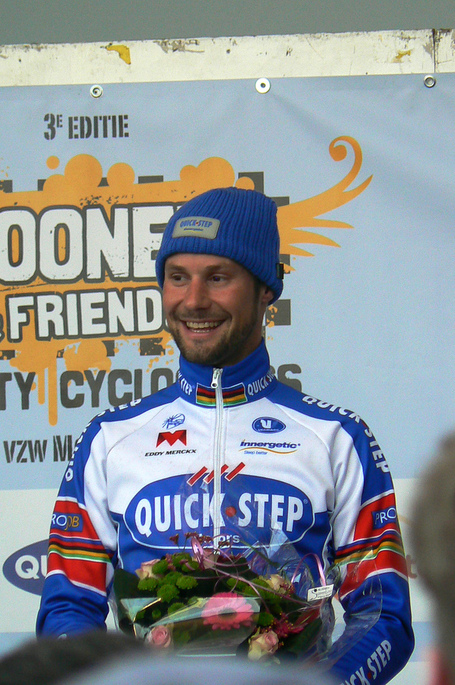 So, an hour and twenty minutes after leaving home - rather than the 45 min google maps suggested - I arrived at het Zilvermeer (the silver lake).

Van de weg naar 't veld - from the road to the field - is a charity race organised by Tom Boonen and Wilfried Peeters. It benefits Move to Improve, a fund for kids with motor skills problems. Some or the riders participating are Tombo's current teammates (Jerome Pineau, Frederique Robert), some are past teammates (Carlos Barredo, Bram Tankink). Some are, I assume, training buddies of his (Yannick Eijssen, Jelle Vanendert), others are just plain cool guys showing up for charity (Marcel Sieberg).

The parking lot required an amount of off-roading totally not befitting my little car, but in the end, I got there just in time for pro racers' recon. Let me tell you, few things in this world are funnier than watching The Gorilla going full power into a sandpit. He improved fast though, especially after asking Lars for advice. 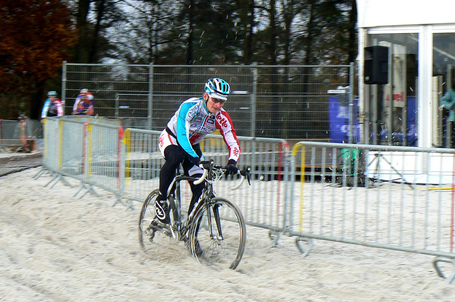 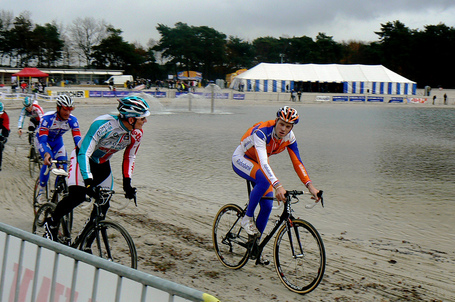 There was a lot of teasing between the riders, a lot of trash talk too. The Italians shouted at each other at each passing, even though they were all not very good at it (Matteo Trentin excluded). Lars Boom, while flying past a clearly struggling Tank, couldn't help a bit of teasing either. "Kom aan man, harder trappen!", or "come on man, pedal harder!".

Before the real thing, it was time for the former pros' race though.

Johan Museeuw, the wimp, wore gloves. Carlo Bomans, after an exceptionally ridiculous sandy faux-pas, turned around, laughed, and asked the audience (of which there was plenty for such a shite weather day, fyi), "You're all here for the comedy, right?" 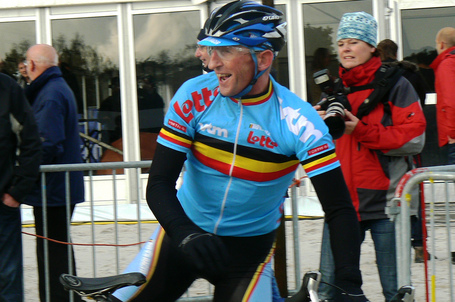 Roland Liboton DNF'ed after half a lap. He was clearly woefully out of shape. Marc Wauters also put on a few pounds afters his retirement, but he at least finished the race.

In the end, the race was won by Erwin Ververcken, former triple world champ, easily. In the last lap, he had time to pat Peter Van Santvliet, who he had doubled, on the back as he lapped him. 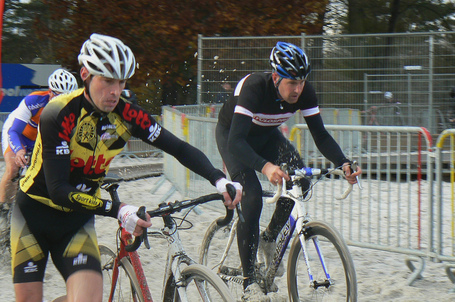 Once that was out of the way, it was time for the real thing. For some added interest, the whole thing began with a flying start, something which they should so use for real races. 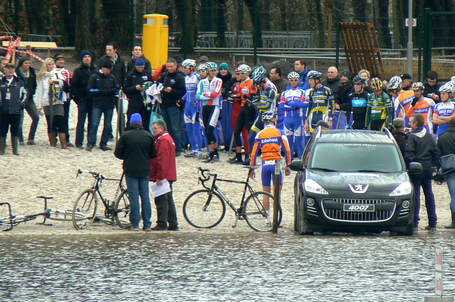 The Rabo dude standing alone is former world champ and current Dutch champ Lars Boom, who got a one minute penalty for being awesome. A minute might not seem too much compared to the real roadies, and it wasn't. But not all of these guys were roadies. Some of 'em - Maarten Wynants, Sean de Bie, Pieter Vanspeybrouck - have a cx history. They'd prove to be more fierce adversaries.

But to get to them, he had to go past... André Greipel, who got off to an absolutely crazy superpowerful flying start. 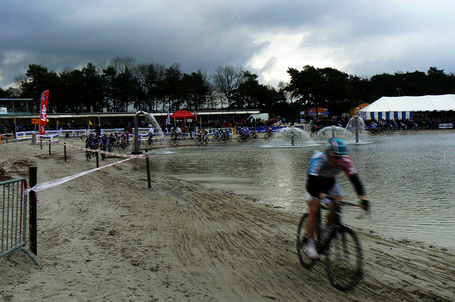 It was really fun to see. Seriously. Boom caught up quickly. Like, really quickly. He got tons of cheers too, rivalled in intensity only by Tom Boonen and Jelle Vanendert. His colleagues didn't just give him the victory though. Carlos Barredo nearly purposely shoulder-barged him right into the lake.

All of the pros were in a jolly good mood, with laughter and winks a plenty. Knees, stuck in the sand, pointed at the crowd and proclaimed "nächste Runde, wait and see!". We waited, but we did not see. Visconti, after getting stuck into a rut in the sand, looked at me with a twinkle in his eye and let out a truly Italian "Eh... no." 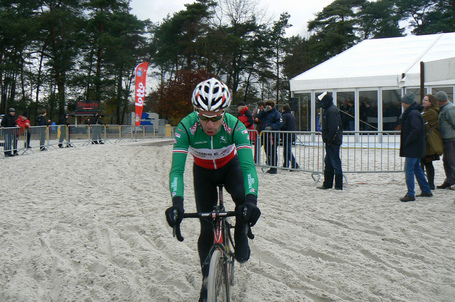 The Italian later admitted to never having raced a cx before. It showed.

In fact, it quickly became clear who had the skills and who didn't. Frederique Robert, Bram Tankink, Jelle Vanendert and André Greipel did good. Giovanni Visconti didn't have the faintest idea how to tackle the sandpit, even after six tries. Stijn Vandebergh is simply too tall for cross. Yannick Eijssen, Serge Pauwels, Carlos Barredo and Johnny Hoogerland were not too great either.

Whenever someone went down, their first priority wasn't getting up, but making sure the guy behind them would go down too. 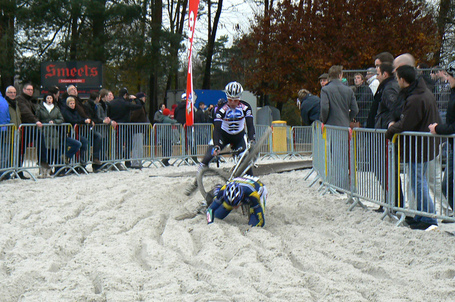 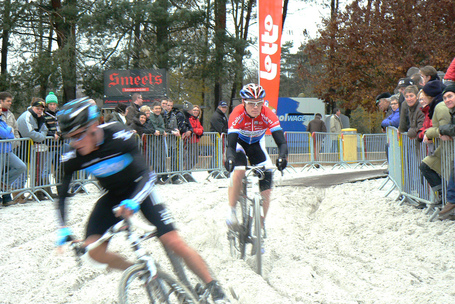 At one point someone, I think maybe Bjorn Leukemans, held onto Bobbie Traksel's bikeseat so strongly Traksel fell over and his chain came off.

Lars Boom, in the meanwhile, had to keep fighting to make it to the front, where Maarten Wynants and Sean de Bie were duking it out for the win. 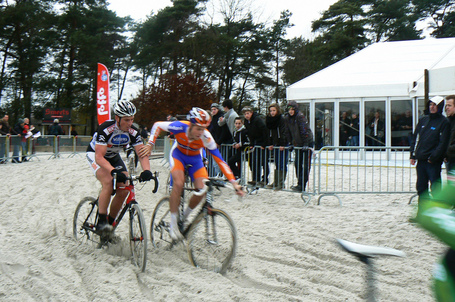 Tom Boonen raced hard, but never reached the front of the field. He had an excuse though. Poor boy only had time for one lap of recon, it being his race and all, and even then he was stopped every five feet for pictures and autographs. 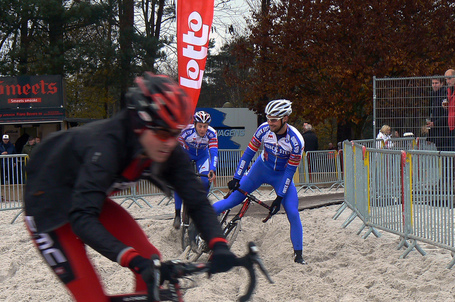 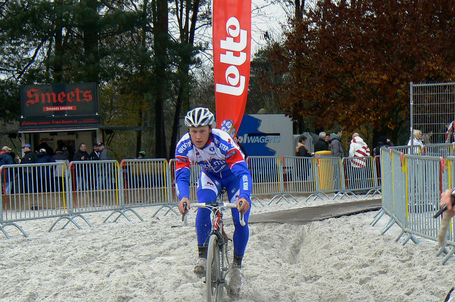 By this time my toes were, despite the rugby socks I had on, completely frozen. Now this was real cross weather.

Frederik Veuchelen, well, he was also there. But he looked pretty great in a rare ray of sunlight, so I'm adding the picture to the thread anyway. 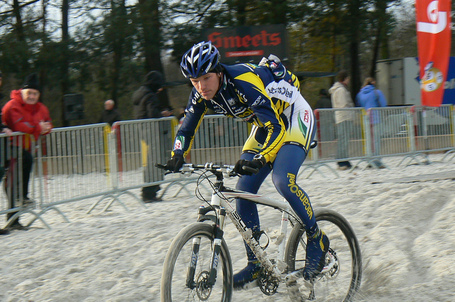 Lars Boom had a flat midway the race, but still managed to win, beating Maarten Wynants in the final lap. Sean de Bie claimed the third spot on the podium. 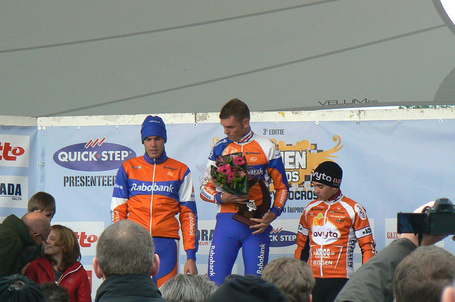 The second podium ceremony honoured Tombo, Boom again, Visconti and Lighthart for being national champions and Addy Engels for this being his last pro race ever. 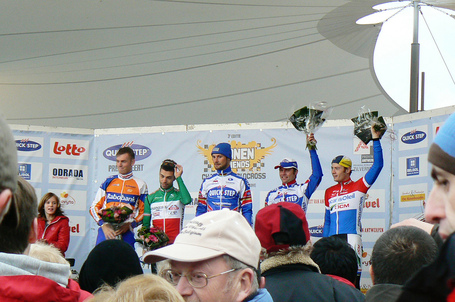 On the podium, Tombo looked happy and relaxed. He had every right to be. This was truly one of the most fun races I've ever been to. Can't wait for next year!

All of these pictures are mine. But I'm willing to share the rights with Iker if he asks nicely.

Full photoset - including a Visconti in the sand flipbook - on flickr