Share All sharing options for: Offseason Capsule: Is Liquigas becoming the new HTC? 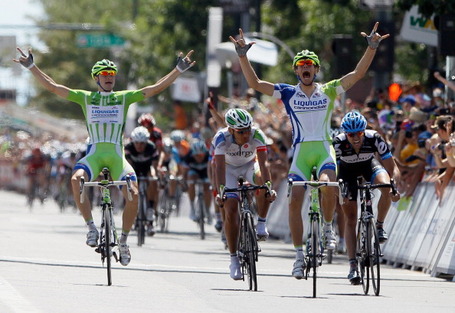 Where is Liquigas-Cannondale heading these days? Long thought of as a grand-tour oriented team, their identity is becoming increasingly associated with their younger riders who have a prodigious appetite for sprint victories. Sound familiar? The same thing happened (albeit in a different mode) to the former T-Mobile / Highroad squad. In fact, Liquigas was second only to HTC this year in absolute number of victories...

Built around dual grand tour leaders Ivan Basso and Vincenzo Nibali, Liquigas fell from 2nd in the 2010 UCI Team Rankings to a middling 8th this year. What happened? Well, for one, they went from winning two Grand Tours last year to garnering a 3rd, 7th, and 7th this year. That's a rather dramatic drop for a team with two riders who are serious podium contenders in any three-week stage race. Also, the neon green squad lost Roman Kreuzinger and his UCI points from various placings, including a 3rd in Paris Nice. So, what did they do to cope? In short, try more of the same on a reduced squad and get a nice haul of points from their up-and-coming sprinters.

We didn't have an offseason team capsule on Liquigas last year, but I believe I speak for the masses when I say we expected a good showing from Nibali and Basso in the grand tours. Many thought Basso would finish top 5 at the Tour and similarly expected Nibali to get podium at either the Giro or the Vuelta - or, more realistically, both. As for the rest, Sagan bore the brunt of the attention directed at Liquigas to see how he could handle the big boy cobbled races in April.

The stage race consistency just wasn't there this year. Nibali and Basso did little in terms of the 5-8 day stage races in the earlier part of the season (they went 4th and 5th at Romandie, but that was all), though it's not hard to conceive of either of them doing well in Paris-Nice, Tirreno-Adriatico, the Dauphine, etc. That, paired with a notable drop in Grand Tour placings thanks to a failure to score big in the Giro and the Vuelta, made it a disappointing year compared to expectations.

Sagan performed as well as expected, racking up a total of 14 victories over the course of the season, including overall wins at the Giro di Sardegna and Tour of Poland. He also won the points classifications in California, Poland, Sardegna, and the Tour de Suisse. He pulled out victories in outright sprints as well as tough uphill finishes and a mountain stage that ended in a daring descent in Suisse. The one area where Sagan offered potential disappointment was in the spring classics. After stating he wanted to Target Milan-San Remo, he missed the front group when the race split on the descent of La Manie. In the cobbled races, he fared even worse, not even finishing in Flanders and displaying an allergy-like avoidance of the business end of the Paris-Roubaix peleton, even before the 200km mark. This came as a surprise after Sagan was one of the key animators of the finale of Gent-Wevelgem over several cobbled climbs.

Viviani picked up a fair number of sprint wins, which were added to by Guanieri and Oss. The team got a few wins in minor Italian one-day races thanks to Basso and Simone Ponzi and a stage win in the Giro from Eros Capecci, but nothing really in terms of other notable results.

Should the team focus on grand tours or bringing up its emerging sprinting talents? It may seem like a tough choice, but in reality both can be pursued. Basso may have a year or two more of top-5 placings in grand tours left in his legs, but he can't be counted on to lead the team for much longer. Not that he's getting too much slower, but the younger kids aren't waiting around for him. Instead, Nibali offers the chance to take a few more grand tour wins, though it is hard to see him winning the Tour in his career. He held promise at first, but there are too many guys near his age who seem more capable (the Schlecks, Contador, Van den Broeck). If he focuses a bit more on them, Nibali could also feature prominently in a few of the spring Classics - he is a constant animator on the Poggio in Milan-San Remo and finished a promising 8th at Liege after "not going into the red" to follow the move by the Schlecks and Gilbert.

While Nibali is definitely talented, the team's best prospect seems to be to hold onto Peter Sagan and let him develop naturally. It remains to be seen if he will steer more towards pure sprinting or towards the Philippe Gilbert model, but either way he is guaranteed some success. Indeed, he could even gravitate towards the Thor Hushovd model, winning sprints based off pure power alone but gravitating towards the classics later. Really, with this dude, the possibilities are almost endless.

Liquigas also has retained the core of its team - and its sprinting talent - over the transfer season. So, for the most part, expect a large degree of continuity with last year. If they start to focus more on providing some support for Guardieri, Sagan, and Viviani - and maybe even Oss - in the sprints, they can improve here. When they've dedicated riders to helping their sprinters (see Oss and Viviani at the USA Pro Cycling Challenge), they have had good results. What they lack is depth in stage racing talent - without replacing Kreuzinger and Kiserlovski and without palpable improvement in Agnoli, they are becoming overly reliant on two riders to pull in results in their area of traditional strength. Could we see them morph more into the HTC model of developing talented young sprinters? I'm doubtful they'll embrace this wholeheartedly, but they have some of the pieces in place and their results from this year indicate they might be able to achieve some success there.

Finally, I would be remiss if I did not mention Sylwester Smyzd in a discussion of Liquigas. Can he PLEASE have a shot at a stage race on his own? The world would love to see what the climbing demon could do if he were truly unleashed.