Share All sharing options for: Shay Elliott, by Graham Healy 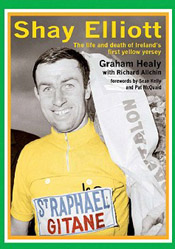 Title: Shay Elliott: The Life And Death Of Ireland's First Yellow Jersey
Author: Graham Healy with Richard Allchin (forewords by Sean Kelly and Pat McQuaid)
Publisher: Mousehold Press
Pages: 193
Year: 2011
Order: Mousehold Press
What it is: Before the Foreign Legion there was the era of the pioneers. Among their ranks was Ireland's Séamus 'Shay' Elliott: the first rider from the English-speaking nations to win stages in all three Grand Tours; the first to make the podium in a Grand Tour; and the first to win an important one-day race, the Omloop Het Volk. This is his story.
Strengths: While Elliott's tale was picked up during the Kelly-Roche era, up to now a lot of it has been told confusingly. Much of it has been left untold. This is a pretty comprehensive fact-based telling of the tale.
Weaknesses: At times there's an almost cold, matter of fact feel to the story, constantly pushing forward when sometimes you might want it to linger longer on certain races and events.

Away back in the mists of time, before bicycle racing was popular or profitable in Ireland - in other words, before Irish riders started winning bike races - one Irishman was showing that you didn't have to be from the continent to do well in the pro peloton. That man was Shay Elliott.

Born in 1934, Elliott started his amateur career proper with the Dublin Wheelers, in 1952, winning races both at home on the Isle of Man. In 1953, he became the Irish amateur road champion and retained his title the following year. In the 1954 Tour of Ireland Elliott won the KOM classification, earning an invite to attend the Simplex training camp in Monte Carlo the following January.

Among the tales to be told from that training camp is that it was there that Jean Leulliot made an intervention in Elliott's career. Elliott at this stage was planning on moving to Ghent to further his cycling career. Leulliot - editor of Route et Piste, organiser of the Route de France and the newly resurrected Paris-Nice - advised Elliott to try Paris instead, warning that the kermis scene in Belgium would destroy the Irishman. Leulliot must have seen something in Elliott, because he went so far as asking, via Route et Piste, for someone to look after the Irishman in Paris, saying he was soaked with class and had a great future in front of him. Leulliot had, of course, seen Elliott in the 1954 Route de France, having invited an Irish squad to attend. Elliott had surprised everyone by winning a stage over the Tourmalet and finishing the race fourth overall.

Following Leulliot's intervention, Athletic Club Boulogne-Billancourt - ACBB - stepped up to the plate and Elliott spent the rest of the year racing on the continent, winning races and setting an amateur record for 10km at the Vélodrome d'Hiver. From ACBB he graduated to the pro ranks, joining Helyett-Félix Potin squad. What happened next? Well let's do the short version: all the promise of the early years resulted in minor victories here and there, with Elliott increasingly playing the role of a domestique.

Elliott did get some classy wins: Het Volk and stages in all three Grand Tours (Giro 1960, Vuelta 1962, Tour 1963). He did get the wear the leader's jersey in two of those GTs (the Vuelta and the Tour, both 1963). He also won the Tour of Luxembourg and stages in the Quatre Jours de Dunkerque. But the promise of those amateur years never really materialised.

Why? Not an an easy question to answer. It's important to remember here than, in the 1950s and 1960's, the continental peloton had a glass ceiling. Elliott was an outsider, and that stood against him. How much is a difficult question. In Shay Elliott: The Life and Death of Ireland's First Yellow Jersey Graham Healy and Richard Allchin seem to be painting a picture of a rider who didn't get the chance to be as good as he could be, who got shafted by his team-mates and cycling in general. How much of that I buy I really don't know. It could be true, but I'm not sure that Healy and Allchin really present enough evidence to convince me.

One of the main pieces of evidence against this suggestion is Tom Simpson. Lost in all the crap about Simpson and the Ventoux is what the Briton actually achieved. I don't just mean the Classics and the Worlds. They're the by-products of what was actually a greater achievement: Simpson broke through cycling's glass ceiling. He refused the opportunity to become one of Jacques Anquetil's lieutenants and instead tried to see what he could achieve in his own right. Elliott on the other hand willingly accepted his role within Anquetil's set-up. The difference there between Simpson and Elliott is, for me, important.

As good as Shay Elliott: The Life and Death of Ireland's First Yellow Jersey is - and let's be clear, I think it's a good book - I don't think we really get to know much about Elliott the man and what he was really like. We get to know the facts. The teams and the races. These are important. But of Elliott the man himself, I'm not sure if the book really succeeds in telling us enough of his life. For me, whatever happened to Elliott during his time on the Continent is as much about the type of man he was as about the way he was or was not treated by his colleagues in the pro peloton.

It's not that Healy and Allchin ignore the real issue here. They do ask the question that most needs to be asked about Elliott:

"Years later, after his retirement from cycling, Shay told his friend John Flanagan that in hindsight he felt that some of the lesser wins he notched up throughout his career had been assigned to him by Stablinski and Anquetil simply to keep him in check and to dampen his enthusiasm for the bigger wins. It's a question that will remain unanswered as to why the Dubliner never left Anquetil to become leader in a more modest team, as he certainly could have done. Had he become just too comfortable in the team and so was reluctant to risk a move? Or was it the money [his directeur sportive Raphaël] Géminiani offered him? And he needed money: [his wife] Marguerite's friendship with Anquetil's wife had given her expensive tastes which Shay could barely afford."

But in order to understand Elliott - in order to understand why he stayed so long by Anquetil's side - you need to have access to his contemporaries, the men he raced with and against. In this regard, the book could have been helped with more and longer interviews with Elliott's peers. For some of them, of course, the opportunity for that has gone. Jean Stablinski - one of the most important men in the story - died in the Spring of 2008. In many ways, we have waited too long for this story to be told. But there are still many people Elliott rode with and against who could contribute to widening our understanding of the type of man he was. Whle some of Elliott's peers do contribute their opinions to this story, you really feel it needs more voices.

Beyond those criticisms it's important to stress that Shay Elliott: The Life and Death of Ireland's First Yellow Jersey is a solid, well researched book. It details as much as it can of the life and times of a rider more people should know about. Why should you want to know more about him? Well even beyond the parochial interest of Irish cycling fans like me, Elliott has a role to play in helping us understand the world in which the likes of Anquetil existed. Elliott also typifies the life of a domestique - a life of sacrifice for others that is only sometimes properly rewarded. And we should also seek to understand this era of the Pioneers - the guys like Elliott, Brian Robinson, Tom Simpson, Vin Denson etc - who came before the era of the Foreign Legion. English-speaking riders didn't just arrive in the Continental peloton one day and start to kick ass. They had that glass ceiling to break through first.

Sean Kelly, in his foreword to the book, notes that while he had been aware of who Elliott was back in the 1970s, he hadn't been fully aware of Elliott's contribution to the sport. Even after Kelly had hung up his own wheels, the man from Carrick-on-Suir wasn't aware of the full extent of Elliott's achievements:

"I still hadn't realised his palmarès was quite so remarkable, and that, along with Britain's Brian Robinson, he was responsible for turning a huge page in the development of international cycling."

That role in the development of international cycling is also picked up by Pat McQuaid in his foreword. McQuaid is, of course, from an Irish cycling dynasty, and Elliott raced against McQuaid's father, Jim:

"I was too young to remember Shay racing in Ireland before his move to the continent, but growing up in a cycling crazy family, his exploits were often the main topic of conversation around our dinner table. His successes, alongside those of the other English-speaking pioneers, Brian Robinson and Tom Simpson, showed us that there was no reason why we couldn't compete with continentals. When I started cycling in the early '60s, Shay was the inspiration to my friends and me."

Later, in conjunction with his current role as UCI head honcho, McQuaid makes this point about Elliott:

"[Elliott] was one of the very first pioneers to cross the cultural barrier and extend the sport of cycle road racing beyond its traditional foundations. This has been one of my primary aims as President of the UCI, and I would like to think of Shay smiling down on us and recognising how far we have all come in the fifty-five years since he made his continental debut as a professional cyclist in France. His legacy is fundamental to all our hopes for cycling to develop into a world wide sport which anybody, from any background, anywhere in the world can take part in and enjoy."

For all sorts of reasons, then, Shay Elliott is worth knowng about. And Graham Healy and Richard Allchin's Shay Elliott: The Life And Death Of Ireland's First Yellow Jersey is well woth reading in order to learn more about him.