AKA a set of cyclists who are *really* pleased Marianne Vos finally turns 24 this year!

For yes, the "Best Young Rider" competitions have tended to be a little predictable these last years, when Vos has been riding - so 2011 will be interesting, to see who else are the superstars of the future.  And yes, despite the fact it's the season for picking your teams for the WVDS game, you can trust me - just like Monty, I'm nice like that!

I've already  included others of the under 23s around the home-made Top Trumps series (thinking particularly of Chantal Blaak, the Aussies and the Italians) but just for you, here are some more....   And will it encourage you to venture below the jump if I tell you Emilia Fahlin is rider number 2? 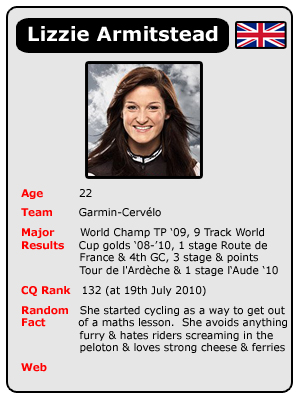 Otley is this small Yorkshire town nestled on the edge of gorgeous moorland, and famous for its beer, having the most pubs-per-head-of-population in England.  As it's on the outskirts of Leeds, it's just about in the same part of the world that was home to the UK's most successful cyclist, the incredible Beryl Burton - and following in her footsteps, or so we hope, will be young track heroine Lizzie Armitstead.

Lizzie was 15 when British Cycling turned up at her school, looking to identify potential cyclists. Lizzie gave it a go for reasons that aren't necessarily the most "noble", but are (more importantly) highly comedic

"It seemed a good way of getting out of lessons for a bit," she says. "We rode round cones in a field and I beat all the boys. They told me I had potential. I'd hardly ever cycled before – getting on a bike isn't the coolest thing for a girl –so it really all started from there."

She was soon signed up to British Cycling's various programmes, and has combined some spectacular success on the track with far too many health problems for someone so young - a bout of glandular fever in 2005, an operation in 2006 for spinal stress fractures, health problems that saw her miss the 2008 Olympic road race, landing on her head in the 2010 Tour of Qatar, followed by an allergic reaction to her hotel room at the Track World Champs, and being diagnosed with anaemia in June.... So although she won Best Young Rider jersey in the 2009 Giro Donne, she didn't really get a chance to be at her very best for most of 2010.

If you wanted to drive her insane you'd put her on an aeroplane that was stuck in a queue to take off late, with dogs on either side of her & a plate of meat in front of her.  If you wanted to make her happy, very strong cheese and trips on a ferry will do the trick.  She writes semi-regular columns for London's Evening Standard, where she talks aout the un-glamourous jet-setting life of a trackie (stuck in the hotel, not allowed to sight-see in case you trash your legs, not allowed to eat the local food because you don't know what's in it), life as a sprinter on the mountains stages & the fun of putting together flat-pack furniture with your boyfriend.  They're sweet and funny, you should read them - and here's hoping 2011 is healthy & full of the win for Lizzie. 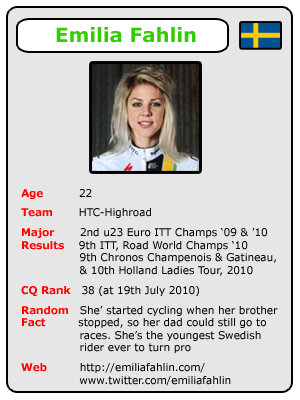 Emilia Fahlin is easy to spot in the peloton by her very long, very blonde hair, and her fabulous Swedish National Champs jersey when it comes to TTs, which always looks good.  I think it's fair to say she has a fairly big following here on Podium Café as well, who'll point her out on every occasion!

She's a TT specialist, coming 2nd in the European u23 Championships twice, but she's also been known to ride fast crits, and could develop into a strong all-round rider.  She started off as a gymnast, and began cycling at 11 - she says she got into it after her brother stopped cycling and her dad still wanted to carry on going to races!  When she signed to Columbia at 18, she was the youngest Swede to go pro ever.  At HTC, she's been known to have a second job baby-sitting Ina-Yoko Teutenberg's dog - and you can frequently see her in HTC's promotional videos - like this one, testing her VO2 for Versus, and the one where she got her 2011 bike fitted for her by BG Fit.

She lives in Girona, so if you're ever in the neighbourhood, look out for the blonde hair and the HTC shirt - she'll be the one smiling as she rides on days when the weather's bad.  Alternatively, look for her on the slopes in the off-season, as like the good Scandinavian she is, she loves to ski and snowboard.  Or you can just follow her twitter! 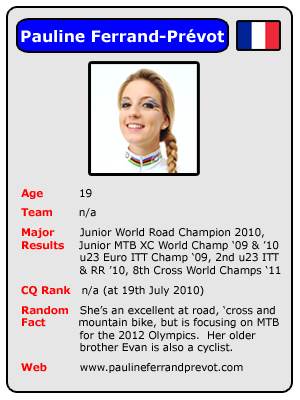 If you are a fan of Emilia Fahlin, you'll probably also be a fan of Pauline Ferrand-Prévot - and if any of the young riders deserve the title of "next Marianne Vos", it's the current Junior Road World Champion.  At just 19 (19 today!  Joyeux anniversaire, Pauline!) she's been Junior World Champion in cross country mountain-biking twice, won silver medals in the Junior Road Time Trial Champs twice, won the European u23 ITT and came second in the u23 Road Race.

She prefers to focus on MTB in the summer, especially as we get nearer to Olympic year, so she hasn't ridden many road races - but then again, she hadn't ridden many cyclocross races this winter, either, and still came 8th in the 2011 World Championships.

One of the most recognisable riders in the peloton, with her trademark long, blonde braid, and diamond embedded in her tooth, she could easily be the poster-girl of women's cycling, and if I were one of the Pro teams, I'd be begging her to sign up, even if it meant her focusing on MTB.  The woeful state of women's road cycling in France means she may be put off by having to move away - but HTC signed Chloe Hosking (another young rider to watch) as a stagiaire for the closing months of the 2009 season, so maybe PFP could take that route for 2012? 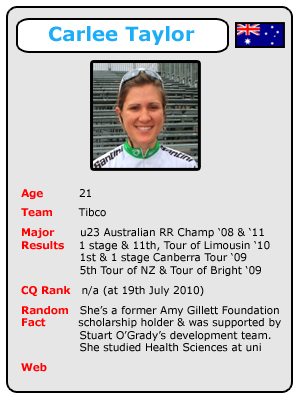 Speaking of Hosking, another young Aussie to watch out for is Carlee Taylor.  Taylor, who turns 22 on 15th February (happy birthday, Carlee) started riding at 13, and was sponsored by Team O'Grady, Stuart O'Grady's development team.  She was also supported by an Amy Gillett Foundation scholarship in 2008 (the Foundation is set up in memory of Australian cyclist Amy Gillett, who was killed on the roads in 2005 - AGF campaigns for road safety and every year supports a woman rider to further her cycling career) and last year she rode for Team Australia in some of the big women's races, including the Giro Donne.

Her biggest 2010 results were winning a stage and coming second in the best young rider's competition in the Tour of Limousin and she's started 2011 in fine form, winning the u23 Australian national road race title, and coming 7th overall, and coming 3rd in the u23 Time Trial.

She combines cycling with studying a BA in health sciences at the University of South Australia.  Riding for Tibco for 2010, she's likely to mainly be seen on the USA domestic circuit, but AIS will surely want her to ride for them in Europe.

The last two riders I know less about, so any information you can find, add it into the comments! 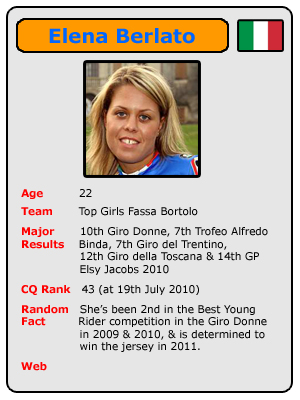 It's impossible to talk about young riders without mentioning the Italians, and Elena Berlato is definitely one of the best young riders they have.  She finished tenth overall in the 2010 Giro Donne without doing any thing spectacular, and would have won the Best Young Rider jersey, were it not for, yes, you've guessed it, Marianne Vos.  This was Berlato's second time missing the jersey - the year before she was second behind Lizzie Armitstead - and she's said that she's determined to win the jersey this year.  It was her climbing skills that helped her through the Italian mountains, but she also seems to like the top Classics and World Cup races just as much.

She rides for a very young team, and her aim is to keep learning and improving - but I wouldn't be surprised to see her move to a bigger team next year.  In the meantime, expect her to continue pop up in top tens - and maybe achieve her first big win. 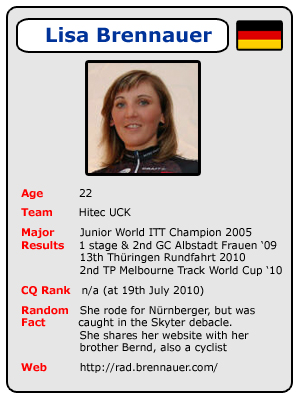 German rider Lisa Brennauer has flown under the radar a little bit in the last few years, but she's definitely worth keeping an eye on.  The former Junior Road ITT champion, signed to Nürnberger in 2009, where she won a stage and came second overall in the Albstadt Frauen, and came second in a stage of the Giro Toscana, but she moved to Hitec for 2010 following the whole Skyter Shipping disaster.  She had various top twenty  finishes in bike stage races, and over winter she's been doing very well as part of the German team pursuit team, her best result being silver in the Melbourne round of the Track World Cup last year.

She's well worth keeping an eye on in 2011, as Hitec UCK will be taking a very definite step up, after signing Swedish superstar Emma Johansson.  This will guarantee invitations to the biggest races, and give Brennauer a chance to learn from Johansson, and get experience domestique-ing for one of the best - as well as hopefully giving her chances to ride for herself.

Other riders who are likely to appear in the young rider rankings are Rossellas Callovi and Ratto, Coryn Rivera, Irina Molicheva, Oxana Kozonchuk Julie Beveridge and littlest Bloesem Emma Trott - and of course, the flock of young left-field riders who are bound to turn up in the peloton in 2011.  Bring on the racing!

Illustrations made by & property of Sarah Connolly