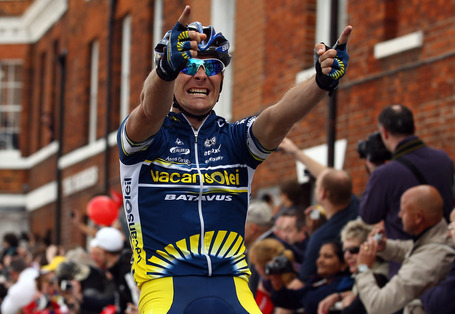 Stranded at the Start Line
Branded a fool
What will they say, next year in school?

There. I dare you to not keep reading. Also, click on the photo for the huge, awesome version.

Vacansoleil made the best of their year in detention. Spurned by the grand tours, they stuck to their goal of proving their mettle as a serious team worth of a second Dutch Pro Tour license. Where allowed to race, they raced with the top teams, they piled up enough points to finish tenth in the world in the CQ Ranking and 11th in the Podium Cafe poll. Even if you subtract their ill-gotten gains courtesy of Ricardo Ricco, they still rank on par with Sky, Euskaltel and AG2R, ahead of Quick Step and the former Cervelo Test Team. On math alone, it was no surprise when the UCI punched their golden ticket for 2011.

The best thing they did was to not take their grand tour rejections lying down. The bad news came trickling in before the spring classics, and VacansOleil responded by racing imressively and aggressively throughout the spring. Bjorn Leukemans' spring campaign alone constituted his best-ever season, taking second in Dwars, fourth in de Ronde (battling Gilbert all the way to the line), sixth in Roubaix, seventh in Brabantse Pij, and 24th in Amstel Gold. Gilbert may be better, but Leukemans was every bit as relevant across the entire spring season as the famously versatile Wallonian superhero.

So too was Hoogerland all-in for the full range of classics, scoring a solid 11th in de Ronde (part of the 20-way tie for 5th, really) and 18th in the Brabant Arrow. Marco Marcato was even better, notching top tens in E3 and Amstel, third in Pino Cerami, and top 20 finishes at Gent-Wevelgem and Brabantse Pijl. Missing from the resume were iconic wins, but when your mission is to get noticed, piling up points and placings while showing the jersey on the front of the big races will do nicely.

Much of last season was spent debating the exclusion of VacansOleil from the grand tours, a thorny issue since all three races had no qualms about taking over the roads of Holland for a few days. It went against the team's stated plans and cost them French climber Brice Feillu, who spent a season idling in the barn and then jumped at Schleck dollars this winter.

But in a way, I wonder if the UCI did them a backhanded favor. If their goal was the World Tour ticket, it's hard to see how it could have worked out better. Rather than spreading their comparatively thin resources across the entire major calendar, Vacansoleil threw all their best guys at the classics. Johnny Hoogerland can climb? No Giro? Race him in Flanders. Same for Marcato. They went to the Tour of Britain and won two stages, rather than toiling anonymously (perhaps) at the Vuelta. OK, nobody ever prefers to miss the Tour, but honestly, what would they have done there? Could Bozic have poached a stage from Cavendish? Would Hoogerland have cracked the top ten on GC? Doubtful. The reality is, they didn't have the lineup for the job last year. Now they do.

Their GC guy was Ricardo Ricco, and while I don't need to beat that dead horse, in hindsight that was every bit as risky a signing as it appeared, and Ricco's popping takes some of the lustre off the shine of a solid season. Oh, and it didn't help that they signed Zeke Mosquera, also before his positive test. Teams can always claim not to have known, but at some point you start to wish they would clue in on stuff. It doesn't look good.

Well, you won't have the Cobra to kick around anymore. Like, ever. Unfortunately, he took their GC hopes out the window with him. With Mosquera joining him in purgatory, VacansOleil will have to reload next year on the climbing front. But they did score a few reinforcements for the classics, including headliner Stijn Devolder, who will form a formidable tandem with Leukemans and possibly spare Hoogie and Marcato for the latter, hiller classics phase. Thomas De Gendt fits in virtually everywhere in April as well. Bobbie Traksel could be missed on occasion.

As with last year, the spring should be their season of opportunity, though a rejuvenated Devolder could give them some GC options in less selective stage races. He was eleventh in the Vuelta once, right? Despite being practically hounded out of Quick Step by Patrick Lefevre last spring, Devolder has a few years left on his prime window, and came around to form pretty impressively later in the year. You don't win both Belgian championships without some fortitude.

Leukemans is getting up there at 33, but can be counted on for another few spring campaigns while VacansOleil build their brand. De Gendt and Marcato offer a much better long-term prospect, and if their climbing ability can be transfered over to De Ronde as they ripen, the holiday boys will be heard from. Oh, and it wouldn't shock me if they swept the podium at the Brabant Arrow someday.

All of these qualities play nicely into Tour de France stage-hunting, which I tend to dismiss too easily. I'm told it's valuable. Look for a blue and yellow kit in practically every breakaway.