Share All sharing options for: They Paved Paradise: Trouble for Milano-Sanremo Finish? 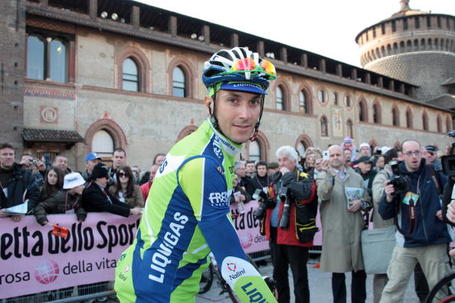 According to a report today in Corriere dello Sport, the finish of Milano-Sanremo is at risk. Stop me, if you think you've heard this one before. The past three editions of the race have followed the Longomare Calvino to the finish line. Well, it turns out that a company called Quick No Problem Parking (Real name! Seriously! Would I lie to you?) received a contract to build a parking lot along the Lungomare Calvino. The problem? It isn't finished yet. The company, really, I can't resist, I have to write it again. Quick No Problem Parking has reportedly invested €1.3 million in the unfinished project, which may block the race from using the road named for famed novelist Italo Calvino.

Just over a month remains before La Primavera, which this year runs on 19 March. Somehow, I expect the Italians will find a solution. Hey! How about a hilltop finish on the Poggio? Too bad the descent and the final sprint are the best parts of the entire race.

On the subject of Barbie, because Barbie and Sanremo go together like, well, they just go together, are we sure he isn't really Søren?