If you've been following women's cycling even a little bit, you may have noticed that there are a LOT of Dutch women in the peloton - in fact, if you've made a Women's Virtual Directeur Sportif  team that doesn't include a Dutch woman, I'm not judging you, but I will suggest that unless it's an all-Italian team, you might want to take another look...  WVDS aside, a while ago I took you through the first part of the Dutch Hegemony - and clearly, the Dutch women have turned up in practically every other part of the Top Trumps Series, but finally, it's time for Part Two.

Iris Slappendel is the only Dutchwoman left on Garmin-Cervélo, but she's worth about five of them anyway.  She comes from Gouda, lik 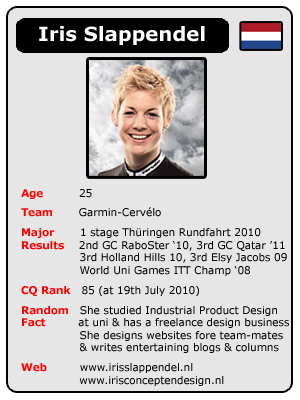 e the cheese, and on the bike, she's a sprinter who has usually been found in Kirsten Wild's sprint train - but left to her own devices, she's got superb race tactics, and if there's a breakaway in one of the difficult sprinty races (wind, cobbles, short sharp hills) you can pretty much count on her being in it.  I don't know if it's that she has a special feel for when to go, or if when she goes, people follow - but either way, she's the type of rider that adds excitement to a race.

Off the bike, she writes really well, and if you don't speak Dutch, is well worth firing up google translate for.  She had a column in WielerReview (I especially liked her letter to Egon van Kessel, but they're all good) and she used to blog for Cervélo's website - and I'm really happy it looks like Garmin-Cervélo are continuing that tradition!  Her race reports are always fun too.... In her spare time, she's a freelance designer, with a degree in Industrial Product Design (she's even designed a bike!)

I liked her description of last year's Tour of Qatar: "If you imagine the sand to be grass, and the camels to be cows, it's just like racing at home" - which is possibly why she came third in the GC this year.  Look out for her in the Classics, tough flattish World Cup races like Ronde van Drenthe, the Dutch sprint stage races like RaboSter and Holland Ladies Tour  and in any opportunistic breakaways in the races that aren't too hilly.  She's got some great results so far, but hopefully in 2011, she'll have more opportunities to race for herself.

So who will she be riding against?  Well, the next rider definitely will be some serious competition....

Like Slappendel, Ellen van Dijk has spent a lot of her time in sprint trains, but this time for HTC's über-sprinter, Ina-Yoko Teutenberg - but she's also shown what she's capable of in her own right. 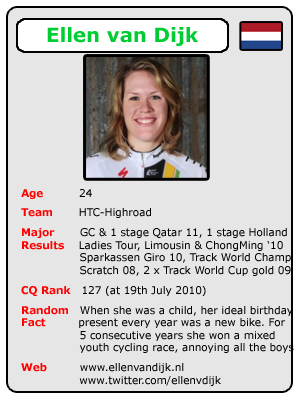 on Sparkassen Giro in torrential conditions, and she's taken stages in Limousin and the Holland Ladies Tour.  She's been European u23 ITT Champion twice, and was Junior World ITT Champion in 2004 (she came second in the road race behind Marianne Vos and Marta Bastianelli) - but it's on the track she's had most success, winning the Scratch race at the Track World Championships in 2008.  That same year she was also the European u23 Champion in Points and Scratch, and in 2009 she won World Cup golds in the Points and Individual Pursuit.  We'd probably see more of her on the track if she didn't have that common Dutch problem of too many great riders to choose from...

She loved cycling from an early age (she has a scar on her chin from when she tried to show her parents she'd taught herself to ride without training wheels) and every year asked for a new bike for her birthday, but like many of the Dutch riders, she combined cycling with skating.  At 19 she had to decide between the sports, and chose cycling.  In another "just like the Dutch", she's combined her riding career with studying at university - in Van Dijk's case, Human Movement Science, in Amsterdam.

Her 2011 has started brilliantly - she won a stage, the GC and every jersey on offer at the Tour of Qatar, partly through her superb breakaway skills (if you think you're spotting a theme, you are.  Windy, hard, flat stages + breakways = Dutch cyclists, just as "she started as a speed skater" is a particularly Dutch way to get into the sport)  and partly her aggressive sprinting.  Her tweets from Qatar were great too - I loved the photos of her team-mates especially! 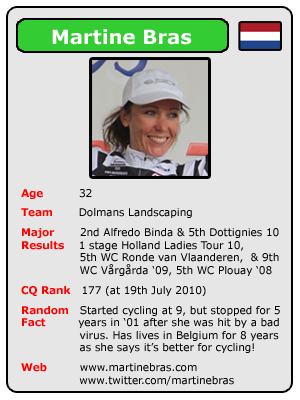 Another cyclist who started as a skater is Martine Bras.  I'd tell you about her biography, but she's got a superb one on her website, so I'll direct you to that, with all my recommendations.  She hasn't had the easiest of careers - in 2001 she caught a virus that kept her out of the sport for five years - but she's had a great couple of years, with top ten finishes in all kinds of prestigious races.

She also seems like a good person to have in the peloton.  If you're an Aussie, or an Aussie fan, you should thank her, because it was Bras who helped Chloe Hosking get a start in European cycling, which lead to Hosking getting a Stagiaire rôle at HTC-Highroad.

Despite the skating start, she's not typically Dutch - she's lived in Belgium for the last eight years, as she says it's better country for cycling (gasp!).  Her 2011 is worth watching - she's moved from Gauss down a level to Dolmans Landscaping, so I'm not sure whether she'll get a start in the same level races as last year - I'm sure the Netherlands National Team will take her on - it was riding for them that she came second in the World Cup race Trofeo Alfredo Binda last year.

Her website is shared with her boyfriend Stijn Ennekens, who she met on facebook, and it's not got as many pictures of her dogs and cats as it did last year, but I'm sure they play just as big a rôle in her life.  I hope she has many good cycling years ahead of her, because she seems like a good person to have around the peloton 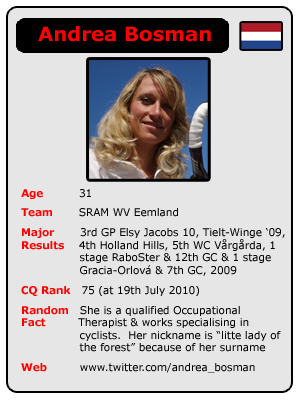 Another Dutch rider who's moved to a smaller Dutch team for 2011 is Andrea Bosman.  Bosman may have played the rôle of "grandma" last year in Leontien.nl, but she apparently moved after the team wanted her to move from GC rider to support, as they expanded in 2011.  Her new home is SRAM WV Eemland - an all-Dutch club which has teams at all levels of women's cycling - something that is admirable.

In 2010 she scored podium places in stages of the Tour de l'Aude, Emakumeen Bira and Thüringen Rundfahrt and top 20 places in a lot of the big races - but she'll probably be hoping she'll recapture her form of 2009, when she won Tielt-Winge, and a stage in the RaboSter.  Off the bike, she's been building up her Occupational Therapy company, & helping cyclists with their riding position.
It'll be interesting to see which races she gets to start in in 2011 - but we'll see.

Of course, it's impossible to talk about the Dutch cyclists without talking about Bosman's former team, AA Drink-Leontien.nl.  They may be sightly less Dutch (and less Barbie-pink - boo!) than last year, but they're still iconic for me - especially given the rôle of multiple World & Olympic track & road champion, Leontien van Moorsel.  I could pick pretty much any of their riders and they'd have a good story, but more at less at random, here are two of their u23 riders - Lucinda Brand and Monique van de Ree.

Brand, who describes life without racing as "a pub with no beer", comes from a family with cycling in the blood on both her parents' sides.  She's one of those cyclists who started because her big brother was racing, and carried on from there.  Last year her season got better towards the end, finishing in 3rd place overall in the Giro della Toscana, and 5th in Holland Hills, but she'd had top ten finishes in other high-profile races.

Van de Ree didn't have such a good season, but she was troubled by crashes and illness, so never really got a chance to show what she could do.  She's loved cycling since she was a little girl, riding with her dad and his friends - the first time she roade in a race she won, and has been hooked ever since. She's been riding some cyclocross in the winter, so hopefully she'll come back stronger for 2011. 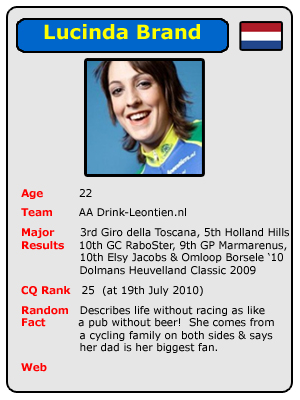 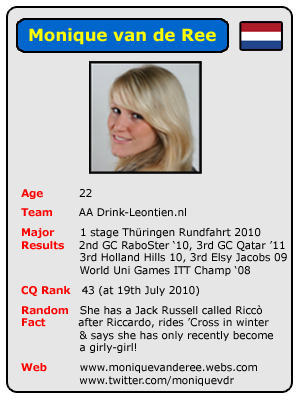 Up next, if I can manage it before the WVDS deadline hits - any medium-point riders I haven't already mentioned!