Share All sharing options for: 2011 Team Capsules: Movistar-ting Over 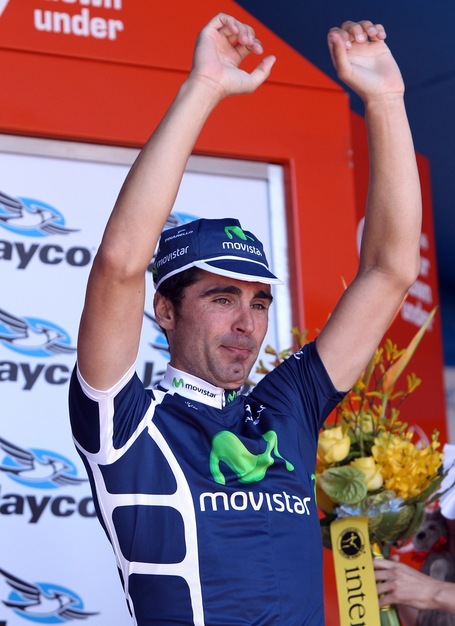 Spanish Cycling went through a pretty long summer... fall... winter. The hero of the scene, Contador, apparently had some legal hangups, although I'm having trouble locating any details on the internet. The next hero, at least to Tour-centric fans, Carlos Sastre, went from a sinking ship to a sunken one, and will spend the season begging for chances to show he has something left in the tank. Alejandro Valverde was already on a long, unwanted vacation. Igor Anton had his arm in a sling and his Red Jersey in tatters. And the final indignity: Eusebio Unzue's Caisse d'Epargne team spent what seemed like eons in limbo without a sponsor. Unzue, the man who guided Indurain, begging for his team's next ride. Unless you care about futbol (and really, who does?), Spain's glory days looked over.

No doubt such pronunciations will prove to be horribly premature. But for the time being, Spain's #1 team is hitting the reset button. Timing counts for a lot in life, and savior Telefonica simply didn't time their marriage to Team Unzue in time for the team itself to cash in on their sponsorship salvation. Stick around, they say, that will change in a year or two. But for now, the team will be in the unfamiliar position of not playing from strength.

Plenty, considering their team leader was cruelly snatched away from the team with no notice (ahem!). Caisse d'Epargne had spent the last several years building up so much depth in their stage-racing team that when things came a-cropper -- Valverde's suspension, Joaquim Rodriguez' departure -- the boys in black were ready. David Arroyo came within one stretch of Italian road from victory in the Giro d'Italia, gamely clutching his lead until the three best climbers in Italy put the wood to him in Aprica. Even in defeat, that stage will be as memorable for Arroyo's descent of the Mortirolo as anything Basso did.

Luis Leon Sanchez did his part too -- cleaning up at the Algarve and Circuit de la Sarthe in spring, coming second at Paris-Nice to Contador, winning the Klasika Donostea (San Sebastian) in August, and coming 11th and 10th at the Tour and Vuelta. David Lopez and Imanol Erviti scored back to back Vuelta stages. Solid rides abounded, thanks to JJ Rojas Gil, Rigoberto Uran,  Rui Costa, Jose Ivan Gutierrez and others.

About the best thing that happened, though, was when Telefonica swooped in and saved the team from complete oblivion. Movistar is a big sports sponsor and according to Unzue they will be around for a while. A continental team is starting shortly, based out of Colombia. After years of French sponsorship, Spain's biggest team has Spanish backing.

In between the redemptive efforts was just about every kind of trouble you could find. Valverde's legal problems finally caught up to him, and his spring results were zeroed out as he was sent packing. Riders headed for the exits as the sponsorship limbo dragged on into the fall. JJ Cobo spent the entire season battling illness and injuries. But nobody had a worse time of it than Rui Costa, who enjoyed his first Tour de France attention when Carlos Barredo clobbered him over the head with a wheel. Weeks later his budding career was in tatters, thanks to a positive test for methylhexaneamine which he seems to have accidentally ingested through a food supplement.

Beyond that, though, the wins never really came. JJ Rojas Gil, their sprinter, went winless for the first time in his career. Valverde and Rodriguez weren't around to carry their load. Sanchez did his part, but his spring target Paris-Nice slipped through his fingers.

So, so much. The future of the team went up in smoke as young guns Sanchez and Uran moved on while Rui Costa remains in limbo, freed to ride just two weeks ago. Maybe Unzue can bring him back and start over. Arnold Jeannesson, a promising climber, skipped over to FDJ, as the team's entire French contingent left the Spanish side. The incoming riders... well, from the interviews I've read Unzue isn't making much of an effort to trumpet their chances, talking about "depth" and "doing the best we can". Not the biggest vote of confidence for young stage racer hopefuls Benat Intxausti or Ignatas Konovalovas, or even Xavier Tondo, their most touted addition. But then, lowering expectations has its benefits too.

They did land a sprinter, at least -- Francisco Jose Ventoso, a regular B-list winner, who has already scored the team's inaugural win in the Tour Down Under.

Not good. Valverde's shadow still looms large over the team, and Unzue has said many times he plans to bring him back in 2012. He's even talked of building a Spanish Superteam in 2013 when Contador's current deal with Saxo Bank expires. That presumably hasn't given any other big-name rides much incentive to come on as stop-gaps, aside from Tondo who didn't have many choices when Cervelo crumbled late in summer. Arroyo, Tondo and a squad of competent young guys will have the chance to grow and maybe surprise people, but grand tour podiums are likely off their radar for the season. More likely they will have guys hanging around the top ten -- Arroyo is practically a lock for this -- and go hunting for stages in the mountains.

To me the most interesting guy is Intxausti. He didn't get results in the Vuelta, presumably exhaustion and team duties got in the way, or maybe he wasn't ready for a three-week race; in any case he DNF'd. But he rode for himself in the Asturias and Pais Vasco tours, finishing a fantastic second to Chris Horner in the Basque race and an impressive third in the slightly less competitive Asturias, where he briefly took the lead after winning the time trial. At 25, his time to show what he's got is pretty much now.

Volta a Catalunya -- They may not have grand tour mettle but Unzue can certainly whip up a one-week stage race challenge. You can hardly call yourself a Spanish cyclist if you can't ace the hilly week-long mini-vueltas. Maybe Pais Vasco is where they break through, but Catalunya comes first.

Donostea/San Sebastian -- LuLu may be gone, but the Klasika is a pretty wide-open affair, and after the Tour Movistar might be in need of something to smile about.

Vuelta a Espana -- Tondo and the Stage Hunters. Has a nice ring to it. Ventoso will likely be swarmed with fastmen gearing up for the Worlds, but if he can bag a stage or two here it would help a lot.