Inside the Omloop Parcours (Yes, I'm Having Fun Now)

Share All sharing options for: Inside the Omloop Parcours (Yes, I'm Having Fun Now)

This Saturday marks the first Classic of the season, and to this humble blogger, something more. The parcours preview you are about to read is the first since I actually went there and rode around a bit last spring. This means that after no less than six years of blogging about cycling, including untold occasions where I spoke with what sounded like authority about a race route, I can finally write from experience beyond what Cycling.TV and a knowledge of french fries can provide. It's time to access those mental and physical images burned into my brain (and shoulders) for the purpose of trying to act like I have something to day. Compared to the ordinary course of business, this is like ditching the old Trek for a brand new Ridley Noah. And like how I picture such a ride, I'll be giggling a lot.

For this year's Omloop Het Nieuwsblad, the good folks at Flanders Classics (who are welcoming 2011 by making hash of their website) have decided to turn the screws on the riders a few times, with the help of classics icon Peter Van Petegem. The race is bumpier, if not climbier, than normal, and the final stretches of punishment are rather devilishly arranged. I'll do this in segments to try to break up the info into something digestible.

[Yawn] the race actually leaves from Gent, but there's nothing very interesting about the starting point, on the outskirts of town near one of the canals leading to the Schelde. Unless you like a good rail yard. Races in July start slowly, so naturally so does the February curtain-raiser, and practically nothing happens besides the inevitable glory-seeking breakaways up til km 67.

To the jump! Where we get by with a little help from our friends.

Hors d'Oeuvre time, but nothing jars the peloton into the reality of a Flemish classic like a couple km of bouncy cobbles.The Haag Hoek won't conjure up memories of the Arenberg Trench, but the 2km stretch is rough enough, probably three stars on the Paris-Roubaix scale. Or as our old friend

Cuddles the Cobble would say, "if you don't love hanging on to your bars for four minutes while rigor mortis seeps into your fingers, you don't love cycling!" Click here for a cute video of Belgian juniors learning how to cheat the cycling gods by riding in the Haag Hoek gutter.

Nine km later they hit the first climb, the Tenbosse, a smooth tarmac climb on Tenbossestraat through Brakel. Maxes out around 8%. Another warmup for the legs. Next is a brush with greatness -- a trip up the south end of the Muur, or at least the same land feature as the Muur, only now it's called Guilleminlaan, and while I don't see any stats it appears to cover less than the height of the Muur in more than double the distance. Another appetizer, for the senses as well as the legs.

That's at 90km, and from there they double back, in reverse direction of de Ronde, to the Eikenmolen, at 99km. The stats say it's 6% average for 600 meters, along with a stretch of 12%, but I'm not convinced those numbers apply from this direction. The race approaches from the south, whereas I am pretty sure the Tour of Flanders would come at it from the north, when including the Oak Road. Nothing will happen here, or at the second crossing of the Haag Hoek at km 114.

Actually nothing happens from 115-133 (watch, the race winning move will happen here now), as the race circles down to the southwestern edge of the Vlaamse Ardennen at Ronse, but after a nice parade along the outskirts of the town it's business time. Leaving Ronse, the race heads up the Kruisberg, a long 1.8km slog up a slope averaging about 5% and starting off with 500 meters of cobbles. A mere 5km later it's on to the Donderij cobbles, 1.5km of typically bumpy rocks, nothing too awful about them, except for the slight rise.

Another 5km and you're on the Taaienberg, a/k/a Boonen's Berg, famous for Tommeke attacks and guys playing games with the gutter. All of the steep part is cobbled (with the upper extension of it on farm-mud-covered tarmac), so the concrete gutter gives you a strategic advantage. Last year Boonen attacked here while one of his teammates, in second position in the gutter line, slowed down to open up a gap -- meaning, if you wanted to catch one of the world's masters of the cobbles in mid-attack, you had to swerve out onto the stones. The grade hits 18% near the end of the cobbles, just out of this picture, so it's a good place to hit your rivals with a jab or two. 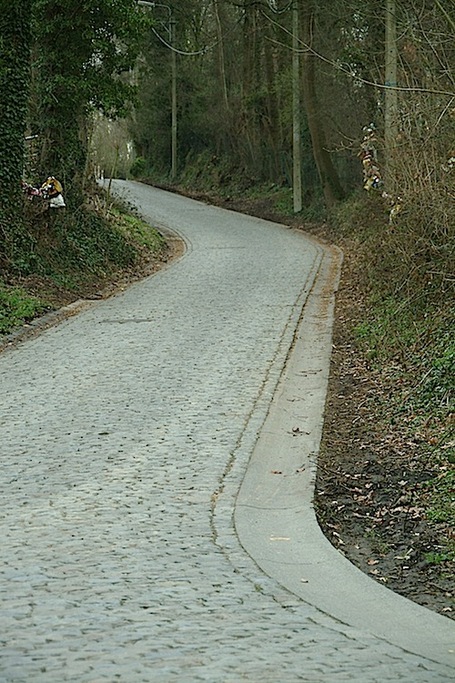 Seconds later, it's on to the Eikenberg, another cobbled rise of 1.1km, albeit at a tolerable (to them) 5.5% grade. Then 3km later they crest the Wolvenberg -- cobble-free but touching 18% in the early going with a long, slow false flat at the top. Then another km or so of cobbles, the Holleweg, flat and unspectacular. Taken together, though, this really will separate out plenty of pretenders.

This is the heart of the race, Van Petegem's signature design. The climbs and extra cobbles sections are mashed together in two bunches: the Haag Hoek/Leberg/Molenberg trilogy, where the winning move is predicted to happen (FWIW), and a troublesome troika of cobbled stretches a few minutes later.

We've gone through the Haag Hoek, which makes its third appearance just around the corner from the Leberg, a pretty standard-issue, a narrow, winding road with cobbles in some places. Like so many Flemish Ardennes, the hill maxes out on gradient early (13%) and lengthens out with a false flat top. The Molenberg, however, will loom largest of all, maxing at 14% but averaging close to 10%, on cobbles, as the last significant climb of the race. Coming swiftly after the Haag Hoek and Leberg, on a day that will start to feel pretty hard by now, means that any sort of pack should detonate on the Molenberg.

Lastly, from 172-182km come three more sections of stones. Paddestraat is a miserable 2.4km; Lippenhovestraat is 1.3km of laughs, and Lange Munte is another 2.5km. Over 6km of cobbles in a 10km stretch.

This would reduce a normal person to screaming jelly; to whoever is off the front, it will present a good check on whether they're serious or not. Cuddles the Cobble says: "Bring a supply of body bags!"

Not much to report here, except that the race finishes right smack in the middle of Gent at Sint Pietersplein, a university 'hood. More than a few races have moved to the burbs, so this is a rare, urban finish, in one of the world's great old cities. This might be my favorite feature of the race, actually. A fabulous ending to something as awesome as the cobbled start to the 2011 cycling season.