The City of Oudenaarde, spiritual birthplace of the Podium Cafe (someday The Pub will be renamed...), had a wee little proposal for the good folks at Flanders Classics to chew on: a complete reworking of the Tour of Flanders. The issue is that De Ronde has a 40-year contract with Meerbeke for the finish line which expires after this April's edition. Thus, the finish of this (fill in hyperbole) race can be imagined to be flailing around like a liberated firehose, looking for a place to land. And Oudenaarde, gateway to the Vlaamse Ardennen and home to the Centrum Ronde van Vlaanderen, has a proposal -- finishing in Oudenaarde. That means the finish could look something like this: 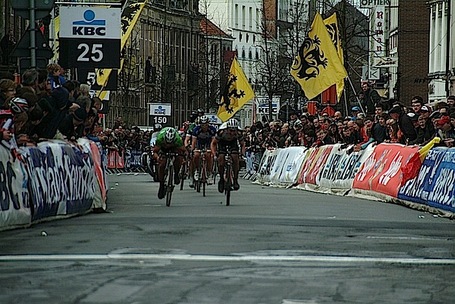 Except that there would never be anything resembling a sprint. Here's the order of finishing climbs that the City of Old Earth proposes:

My head is spinning. It would be so selective, so exciting, and frankly it's doable now that the Koppenberg isn't such a potential disaster. But the Muur would be rendered unimportant. But the dull finish in Ninove would be gone! But the Muur... I dunno. Can they do both races? I'm for that.

Seriously, I will have to study it more to come up with an opinion. Interestingly, there is plenty of precedent for these iconic races making major overhauls. The first 50 years of the monuments saw pretty regular, profound route changes. Hell, Paris-Roubaix used to have a selective climb in it. But! The era of constant change has receeded a bit, and we've become used to the bigger classics retaining their basic shape in the last few decades. No race has more of a claim to massive change than De Ronde -- unlike Paris-Roubaix, its original purpose was a tour, like the Tour, i.e., it was meant to meander around Flanders and visit as much of the region as possible. So the rationale is there. Whether the tradition of the Muur and Kappelmuur has become too much to change, that's another story.