Friday O/T: Give Your LBS a Shout-Out!

Share All sharing options for: Friday O/T: Give Your LBS a Shout-Out! 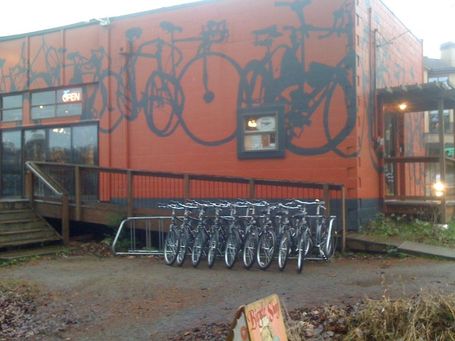 Time to give some props to a slightly beleaguered species (if not quite endangered): the Local Bike Shop. Yes, internet sales have become king, but thanks to the complexity of bikes and the mechanical incompetence of most of their owners, bike shops will always be needed, even in this era of on-line bargain-hunting. It's not an easy road, nobody is getting rich (I'm told), and there's no shortage of shop owners who are in it more for love than money. So tell us about your local shop. Maybe it'll be worth a bit of buzz to them, or at least some overdue appreciation. Mine -- Counterbalance Bikes, pictured above -- on the flip.

Seattle's burgeoning bike culture means that there are probably oodles of great LBS's around, so picking one for me was as much about convenience as anything else. And I've used a few. But I have stuck with Counterbalance Bikes of late, for the service. Counterbalance moved into this location formerly owned by Ti Cycles, run by my teammate Fabian, from France. Fabian had the love, but has moved on to other career pursuits. So in came Counterbalance, to what you'd think is prime real estate along the Burke Gilman Trail, a veritable biking superhighway across north Seattle. Counterbalance changed to early hours -- a shrewd move given the amount of business morning commuters with a mechanical or gear need can bring in, well before the usual LBS hours of 10am. They also rearranged the interior to integrate the repair stands and the shop floor. Now you can hang with your mechanic while he fixes your broken spoke, or what have you, without getting glared at to stand behind the no entry line. Since I am deeply invested in understanding the machine, this access is a huge upgrade from the norm.

But the other part for me is getting to know people, and I've gotten to know one mechanic well while being familiar to the other guys. The impersonal nature of sales may be fine for tracking down a pair of cranks, but unless you're a full-on mechanic, knowing one is a great thing. Owning and maintaining a bike involves a lot of choices, and having someone you trust to not just do the job you can't but to talk through some options is very comforting. The guys at my LBS are friendly, respectful (yeah, too many bike shops resemble the record store in High Fidelity), and good folks. Oh, and they speak 'Cross.