So you thought that the Cyclocross season was over, because the World Cup and the World Champs are?  You thought wrong!  We haven't finished with the GVA Trofee and SuperPrestige yet!  These two series are serious business, and today is Krawatencross, the penultimate GVA race, and SuperPrestige Hoogstraten is ridden tomorrow.  GS said the race

Is also known as the Krawatencross. It's a nice race, this one, with lots of sand. The race runs around a lake, and they skirt the waterside so closely that they're almost swimming. Not too many other obstacles - just some bridges - but it really is a nice race.

it's livestreamed, in a non-geo-restricted way, so yay - and the usual info below the jump 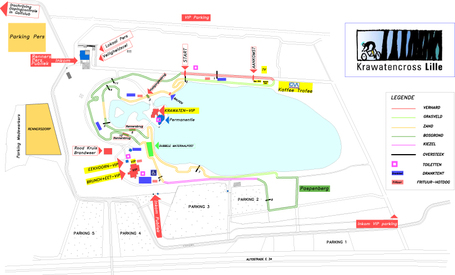 The race website is a really nice one, with all kinds of photos & information & such. Their startlists say that Styby won't be showing off his new World Champion's stripes - EDIT!  But he says he's there on twitter -  but Marianne Vos will be there in the women's race, before she hits the track in a serious way (look out for Sanne Cant in the women's race - there's a rider who really likes sand!)

So, what does this race mean?  Well here's the current standings after 6 races:

The points are awarded for the first 20 riders across the line, and run thus: 25-22-19-17-16-15-14-13-12-11-10-9-8-7-6-5-4-3-2 and 1 point.  So to overtake Nys, Pauwels would have to win, with Nys finishing lower than 7th, etc.  But with 1 race to go after this, Pauwels just needs to move closer to Nys, and he'd still be able to win the series.  Nys will be doing everything to prevent that happening, of course - he'll be disappointed he didn't win the World Cup, World Champs or the Belgian national jersey this season.  And although Niels Albert can't win the series, he'll be smarting from the mechanical that dished his Worlds dreams early on in the race.  Yeah, they have motivation, those guys!

If the livestream doesn't work for you, there'll be more via ProCycling, Cycling Fans & BVLS and there'll most likely be chat here too.  And if you still want more, here's the race promotional video

and here's the last lap from last year