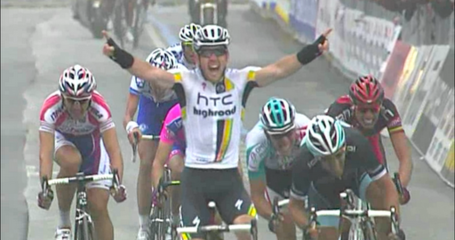 HTC's Matt Goss won his first monument in a small-group sprint in a truly chaotic, riveting edition of Milano-Sanremo, outsprinting a small group which formed after the Poggio including Fabian Cancellara, Phillippe Gilbert, and Italian stars Pozzato, Ballan, Scarponi and Nibali.

The big early news was a crash on the descent of Le Manie that scrambled the hopes of many favorites, such as Farrar, Hushovd, Freire and others. The front group of 25 or so riders contained too much quality, like Gilbert, Ballan, Haussler and other key guys, plus enough domestiques to keep the work rate very high.

Steve Chainel made a brilliant attack at the 15km mark and when FDJ teammate Yoann Offredo joined him, the game was on. Chainel led the group onto the Poggio and BMC's Greg Van Avermaet attacked. Vincenzo Nibali then countered to the leaders at the 6.5km mark, when finally Gilbert and Cancellara made their moves. The gap to Van Avermaet came down and Cancellara drove the chase onto his wheel at the bottom of the Poggio. Nobody could get away once the group came together, and Goss won the sprint handily from Gilbert.