Underestimate Tom Boonen At Your Peril

Share All sharing options for: Underestimate Tom Boonen At Your Peril 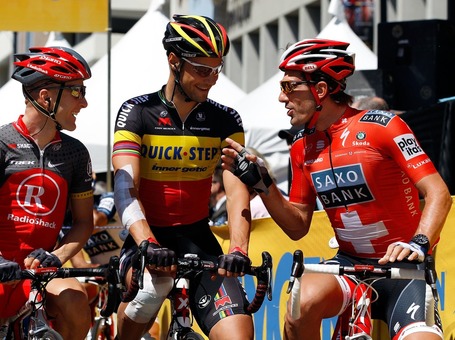 In the wake of a winless weekend, Belgium is said to be on edge over the state of its teams, and to some degree its star, one Tommeke Boonen. Hometown fans aren't the only ones questioning the great Quick Step rider. It's nothing new to hear fans, here and elsewhere, wonder where his sprint went, or when he's going to start winning again. Boonen himself hasn't always helped matters, speaking to the media about being endlessly marked out of the game.

The easiest claim to make is that Boonen is no longer a dominant sprinter. You might even make a convincing case if you can come up with some data that shows his wattage in the final 500 meters is down from past seasons, or that under the same circumstances his top speed is slower than what it was a couple years ago. Not sure where you get that data, other than from Patrick Lefevre, and he has declined to return my calls today. [In fairness, lacking a phone number, I sent them by telepathy. Also, I hear he's busy.]

But we do have some numbers...

Conclusion: his sprint stage victories have fallen off a cliff, somewhere in winter of 2008. So he's slowed down, right? Maybe -- I can't tell what's in his legs. But there's an old saying in cycling that the quality of a win should be judged by who finished second (Anquetil? Bartali?). Well, in his heyday of 2005-6, here are the guys who finished second: Cipollini, Guidi, Pagliarini, Arvesen, Napolitano, Khalilov, Hushovd, Wrolich, Zabel, Grillo, Petacchi, Davis, Van Heeswijk, Cadamuro, and Dean. (Italics: Tour stages). In 2009 and 2010, here are some of the people he's been losing to: Cavendish, Farrar, Haussler, Napolitano (hey, it happens), Rossi, Greipel, Bozic, Davis, Howard, Bennati, Boasson Hagen. This list is a bit incomplete (excluding some races where he maybe was off form), and he beat some of these guys too.

But it does show that maybe Boonen hasn't changed as a sprinter as much as the field around him has. Other than his one win over Petacchi (small sample size anyone?), he spent his heyday outsprinting guys who were either on the downslope (Zabel, Cipo) or who were pretty forgettable as sprinters. And now he's up against a class of sprinters well beyond what he's seen in his career. And besides, Boonen was never a pure sprinter. His bobblehead style is almost comical. But when you have long thighbones and generate enough power to snap a carbon crank, then sure, go after the sprints. Obviously it works, up to a point, and now that the pickings aren't so easy, they're not there for him. Is this Boonen's fault?

And what of the Green Jersey, the ultimate coronation for a sprinter? Last time he started the Tour on more than 36 hours' notice, he won it. Since then he's been excluded twice, reinstated at the last second, and out injured. What does that prove?

Except that none of those results are shameful at all. He lost the sprint in Tours to a Philippe Gilbert who was on historic form. His second on the Via Roma was his best result ever, a place better than his third in '07. Last spring he got demolished by a guy who was making history of his own, who was so much stronger than the field that only Boonen even tried to offer resistance. If Fabian Cancellara was clearly #1, then Boonen was just as clearly #2. Subtract a historic rider on historic form and Boonen easily wins E3, almost certainly wins alone at de Ronde (or takes his chances in a sprint with Gilbert and Leukemans), and is in the finale at Paris-Roubaix with a bunch of guys whose lunch he's eaten for years in that race.

Boonen does have a couple problems: he isn't superior to Cancellara at the moment, even if he has been in the past. In such rarified rivalries, the pendulum swings back and forth, and classics results are fickle things to begin with. We'll see where things go in 2011, with Cancellara on a weaker team and eyeing other prizes. If he remains superior to Boonen from here on out, well, I'm not sure there's much shame in it.

Boonen also has some problems with being marked. How much of a problem is it? Enough to get under his skin. IMHO the issue starts with who he is: a rider sculpted by the gods of Flemish Cycling to win de Ronde. He thunders across the cobbles, explodes on the hellingen, and can sprint enough to lock up any Flemish classic where a group selection survives to the finish. He has an attacking mentality, and seems to get demoralized by the defensive tactics other riders have employed to contain him. What choice do they have? Who besides Cancellara has successfully attacked Boonen in April? Who has even tried? Would it be worth a go? Tough call. So he was marked out of potential wins for two years in Flanders, then ditched everyone but Cancellara (finally) in 2010. Meanwhile, in Paris-Roubaix, where simply holding a strong wheel is harder no matter how much you try, he just kept on winning.

Ironically, though, it was Boonen's failure to adapt which cost him in E3 and Roubaix, two races where Boonen failed to ride with the diligent negativity necessary to corral Cancellara, who slipped away from him both times. Cancellara's overwhelming power put him in Boonen's shoes, but Boonen couldn't play the Pozzato role that -- let's face it -- was his only chance. Does this make Boonen any less a rider than he was in 2005 and 2006? Maybe he is, but the evidence isn't in.

Boonen's biggest problem is that he came to power at a time when his skills weren't seriously challenged by any of his peers. Expectations reached Merckx-ish levels (remember reporters asking him if he was interested in trying to win a grand tour someday?), and for a while he delivered about as much as humanly possible. Since then circumstances have changed a lot in the classics and sprints, and Boonen hasn't exactly elevated his game. But failure to elevate shouldn't be confused with slippage.