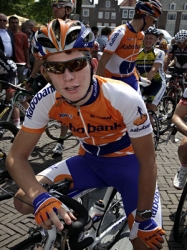 Know your young cyclists? You've heard that Taylor Phinney is about to revive American Classics racing? That John Degenkolb will put Germany back on the map? Meet one of the guys they've been dueling with... and even losing to: Rabobank's Jetse Bol.

You may have heard of the 21-year-old from Avenhorn in wind-blown northwest Holland -- if not from his promising palmares then from the special shout-out he got here last week in a diary by his girlfriend, Nancy Arreola. [Love is a daily staple here at the Cafe.] But about those palmares...

Bol dreams of the classics, and as these are races where power is king, he and his Rabobank CT squad can take heart in knowing that he regularly finishes in the top ten in time trials, including two prologue wins last year. Bol also held on for a 12" overall victory the Tryptique des Monts et Chateaux over Phinney and won Olympia's Tour in 2009. In the classics he was an impressive 5th in Paris-Tours Espoirs, 14th in Paris-Roubaix Espoirs (first large chase group). This was enough to earn him a callup to the Pro Tour Rabo squad for the last six weeks, where he rode several of the fall Classics. It's too early to say where he'll go but the signs are all very positive.

Jetse and I spoke by email a couple weeks ago, as his season was kicking off...

PdC: First off, can you tell us a little about Driedaagse West Vlaanderen? This must be one of your best chances to race with the big teams in a very competitive setting? By that I mean, this race features a lot of younger riders, so the big teams are present but they do not necessarily steal the spotlight.

Jetse: For me it was the second race of the season while the pro riders have been racing since TDU, so it is not the best race to impress anyone because the form is not quite there yet but it is a good preparation race, the best is yet to come!

PdC: How is your form now?

Jetse: My form is better than last year at this time.

Eye on the Classics

PdC: Tell us a bit about your riding style. I see sprinter in your results but I can also see times when you have finished alone or done well in time trials. Do you consider yourself to be one certain type of rider? 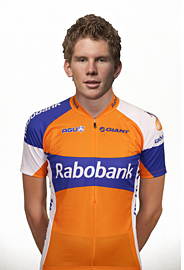 Jetse: I am more a classics type of rider, who can also perform well in short prologues and breakaways, I like the Belgium classics in Flanders and the races in North France, I also love to race with a lot of wind and bad weather conditions but my heart beats faster when I see the cobble stones! I usually do well in hard prologues; I was not that strong in my cadence as I am with my wattage power, a hard circuit can make a real difference for me. Last winter I spent much time working on my cadence and my sprint skills, I love to jump away before the sprints! That’s not always a good thing, you have to wait for a good day and perfect conditions, I would like to work on my sprint tactics in order to win more races and I am hoping to have a great season.

PdC: Since you are now age 21, are the things that are your strength now likely to be your strengths in the Pro Tour, or is it too early in your development to say?

Jetse: I guess I will always prefer the classics and short stage races, I feel that I can perform better in those kind of races so far and I am very passionate about it also.

PdC: OK, dream race -- if you could win one, which would it be? Flanders or Roubaix? Or something else? Do you dream about a specific scenario, e.g. attacking on the Muur? Can you share some details?

Jetse: Roubaix definitely! I would love a break away and finishing in a solo attack in the track of Paris. But of course the way Cancellara won the last edition of Flanders was amazing, I think it depends on the race and the rivals, both races are on the top of my list for sure!

PdC: When you develop a training program for the year, what do you focus on?

Jetse: The biggest focus is on the early season stage races like Normandy, Bretagne, Dutch Championships and of course Paris Roubaix! The big goal in the second part of the season is definitely the World Championships.

Life in the Rabobank System

Jetse: The reason why I was riding with the Pro Team last season is because they had many injured and sick riders. I knew from the beginning that it wasn’t a test to see if I was ready for the Pro Team, but it was a great opportunity for me to show myself and learn from all the guys in the team.

PdC: How did you enjoy your time with the senior squad?

Jetse: I enjoyed it a lot, I already knew some of the boys because they are former teammates from the Continental squad, the first race I did with the Pro Team was in my birthday so it was a very special present for me! The Dutch National Coach didn’t selected me for the Worlds Squad so it was a very good opportunity and a big motivation to keep working and training hard, being able to race with the big guys was great and I had something else to focus on.

PdC: Is this where you feel you are headed, to the Rabo PT team, or is it not so sure? There must be other teams out there watching you.

Jetse: There’s no guarantee that I will ride for the Rabobank Pro Team in 2012, I will focus on my performance for now, giving my best in every training ride and races; I had a good two months in the Pro peloton last season but for sure that’s not enough, hopefully I will be riding with them next season!

PdC: Going further back in time, when did you become involved with Rabo CT? Just before they signed you in 2008, or had you been in contact with them earlier? Do they start watching young teenagers and following their progress for a few years?

Jetse:The first chat we had was in my last year as junior; I had a phone call from them, they wanted to meet me and hear my ambitions in cycling, they talked about their future plans as a team too, this was because they wanted to see if I was a good fit for the team, short after that they gave me a contract offer and I knew it was a huge opportunity for me.

PdC: For a teenager in the Netherlands, is the Rabo CT absolutely the best opportunity you can have? Or is it possible to go with other Dutch teams or foreign (Belgian?) teams and have just as good a chance to develop?

Jetse: For sure, it’s the biggest opportunity! This is just a Continental Squad but everything is so well organized, the staff we have is as good as any other Pro Team’s staff, they really look after all the riders and they (along with the sponsor) provide us all the best equipment so we can give our best performances while riding. With a lot of respect to all the other teams, Rabobank is the icon team from the Netherlands and I love to ride with the orange colors, having in mind that many of the former riders from the Continental Squad are riding now in the Pro Peloton.

PdC: The parent team is going incredibly well now, especially with Sebastian Langeveld winning OHN. I know big wins can lift a team, but does the PT team's success help the CT team at all or are they too separate?

Jetse: Of course we feel proud of their success but we are a complete different squad, we have our own DT and staff and we rarely spend time with them.

Hegemony or Not to Be?

PdC: For a few years we fans have been waiting for the presence of Dutch riders to grow and make the Netherlands one of the most powerful nations in cycling, after several years where this was not the case. Now that seems to be happening, with what people sometimes call the "Golden Group" (or something like that). Does this make a difference for you? Do young Dutch riders feel more encouraged by the success and the presence of important riders on the biggest stage? Is it easier to see yourself succeeding when guys you know are succeeding after taking the same path as you?

Jetse: I think is great motivation especially for little kids to see the dutch stars of cycling doing so well in the international field, for me I feel more like focusing on my own goals and of course I would love to achieve the same success but I concentrate on working hard and make my way into that direction.

PdC: Are fans getting more excited about cycling in the Netherlands in recent years? Not just with better riders to root for, but you also hosted the Tour de France and the other grand tours too.

Jetse: Maybe it is growing but it’s still not great, the only famous event is the TDF other important stage races like the Giro or the Vuelta are not even live on National TV. We do have the big classics like Paris Roubaix and Flanders but there are still many races that the fans don’t get to see that’s why we prefer to watch it on the Belgian National TV ;)

PdC: Did you see any of the grand tour starts or were you away racing? 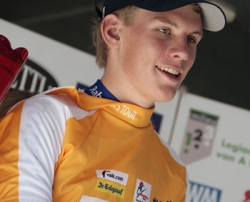 Jetse: In 2009 I went to the Vuelta prologue in Assen but with the other two Grand Tours I’ve been busy racing.

PdC: Am I right that you live in the Antwerp area now? Where do you prefer to train?

Jetse: I still live in Avenhorn, a little town in the North-Western of Holland this is a very flat and windy place, training here can be very hard and complicated, you can get bored very easily. If I have to do some hard rides I prefer to go to the South of Holland because it is a bit more hilly but in the future I see myself based in Spain or Italy.

PdC: OK, last one, I promise! With all the traveling you do, how important is the social media to you? I am old, so I can remember traveling and having no contact with family and friends, but as a cyclist and a young guy the ability to stay in contact must mean a lot to you?

Jetse: Well, we have a lot of technologies to stay in touch with everyone now; my blackberry is my new best friend! The social networks have helped me a lot (facebook and twitter) I also have a website (www.jetsebol.nl) where I write some blogs so my family and friends can see how I am doing when I am away from home but of course it is hard to be away for so long, but at the same time I am doing what I like the most and the sacrifice is worth it.

You see what he did there with that link, right? Jetse likes staying connected, so hopefully we can connect with him further as his season -- and his future at Rabo or somewhere else -- unfolds. Some of his big rivals from the last two years are up in the big show, so with Bol it's not so much "If" as "when and with whom." Follow him at his site and here too, of course.