Share All sharing options for: Your Whole Massive Guide to Dwars Door Vlaanderen 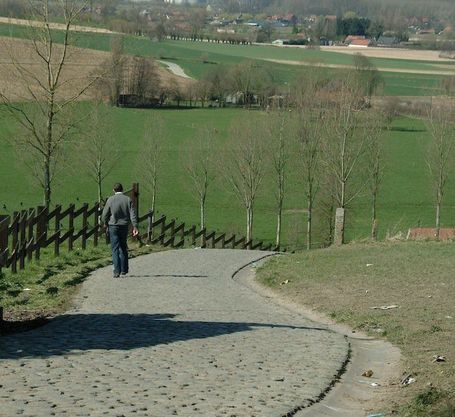 The Cobbles Season may be a real season, with a beginning (Omloop), middle (Vlaamse Wielerweek), and end (Flanders-Roubaix week) but so much of it revolves around the Tour of Flanders. Tomorrow's Vlaamse Wielerweek (Flemish Cycling Week) kickoff event is a pretty good example of this. Dwars door Vlaanderen is basically the Flanders Classics version of E3 Prijs Vlaanderen. Flanders Classics is the newly-formed race umbrella organization which owns (shelters?) everything in Flanders except E3.

Putting that little dynamic aside for now, let's just say that the two events, three days apart, are the best dress rehearsals for the big show. They both run just over 200km and are split between a first half on the flats and a second half bumping around the Vlaamse Ardennen. Neither one quite captures the setup of climbs used in de Ronde, but that's not important. What matters is getting into race conditions on the stones, hills, and narrow, twisting roads of the Ardennes.

So that's why it matters. What it looks like and who's along for the ride, on the flip...

That profile enlarges when you click on it. Sorry the .pdf conversion blurs the red cobble indicators but you'll get the idea. Here's the list of hellingen of Dwars door Vlaanderen, as numbered on the profile:

In de Ronde? No
Cobbled? No
How Hard Is It? Sounds like a pretty long slog, 2.5km, although at 4% average gradient and no stones it should merely warm up the legs.
How Strategic Is It? Not.

In de Ronde? Yes
Cobbled? No
How Hard Is It? Well, it's got a nasty 13% ramp in the middle and a long run-out, so you can call it 1.3km.
How Strategic Is It? Not very, though it's part of the Molenberg-Leberg-Valkenberg troika that could play a big role in de Ronde. Also featured in the Omloop as the closing climb combo with the Molenberg. Here, you might see the field start shrinking if the race heats up, but I suspect it will stay calm a bit longer.

In de Ronde? Yes
Cobbled? Yes
How Hard Is It? Pretty hard: 1200 meters of stones would be an issue even if flat. Tilt up to 5% average/9% max and you have a place to hurt people.
How Strategic Is It? Of the three big places to launch, this is the first. 60km from the finish is far, but in combo with the Steenbekdries that's a lot of cobbles.

In de Ronde? Yes -- but I think from the other direction.
Cobbled? Yes
How Hard Is It? The stones are big and bumpy here, and with another 300 meters after the Eikenberg you'll have legs burning. But if I'm right about the direction, coming up from the train station in Etikhove, then it's not very steep, just a nice, steady climb.
How Strategic Is It? see #5. Game on.

In de Ronde? Yes
Cobbled? No
How Hard Is It? 13% max, 7% average... I dunno, it's really just a lovely road. I can't imagine having bad feelings on this ascent. Also, these guys eat paved climbs for lunch.
How Strategic Is It? Not very. Despite coming at under 50km to go, it's isolated between a few very selective portions of the race.

In de Ronde? Yes
Cobbled? Yes
How Hard Is It? Typically rated one of the harder climbs in Flanders, though mostly due to the length. 1500 meters of this 2200-meter climb are cobbled, and subtracting a long lead-in and a flatter section on the middle, it has some nice, sustained ramps.
How Strategic Is It? Very. This is the start of attack zone #2. A few guys will get spit out the back, and those who barely hang on will meet their maker on the...

In de Ronde? Yes
Cobbled? Dear God yes. See picture at the top.
How Hard Is It? I'm pretty sure "paterberg" is Flemish for "strong men also cry." IMHO this is the most painful climb in the region. 20% max in the middle; 12% average for 360 meters. No gifts.
How Strategic Is It? Very. Well, depending on whether anyone gets to the top in shape to do something. A lot of guys will be hurting bad, and walking isn't out of the question if the traffic jams up.

In de Ronde? No
Cobbled? Yes, or at least it comes with Varentstraat, fully 2km of cobbles.
How Hard Is It? Hard. Many tired legs. I'm seeing numbers of 1400 meters at 6.5%. At this stage of the race that's a lot.
How Strategic Is It? This is attack zone #3, thanks to the extensive stretch of stones.

In de Ronde? No
Cobbled? No
How Hard Is It? I can't find any numbers, so I guess it's not that hard.
How Strategic Is It? Penultimate climb, 18km from the line. It may figure in, but if there's a good selection in the lead, my guess is they'll keep their powder dry for the...

In de Ronde? Yes
Cobbled? Yep.
How Hard Is It? In and of itself, not terribly. It's a wide road and guys sometimes jump on the sidewalk to skip the cobbledygook. 5% average won't kill anyone... normally.
How Strategic Is It? At under 10km to go, what's left of the race could explode here.

This is a slightly trickier question. Coming as it does right after MSR, you tend to get a number of notable exclusions and guys limiting their aggressions, but only among the biggest names. Missing from the startlist are Gilbert, Hincapie, Pozzato, Goss, Cavendish, Eisel, Hushovd, Boasson Hagen and a few others. [HTC have a couple open spots still.] Defending champ Matti Breschel is out. A few of the heavy hitters like Boonen, Ballan, Cancellara and Flecha are here, but might be guarding their form and stretching out the legs.

Garmin, Quick Step and BMC are three teams whose psyche would benefit from a win. Van Avermaet might want to capitalize on his early run of form and go for it again. Garmin could be very active, even if Farrar and Haussler sit back, with Hammond, Klier, Van Summeren, and - yes! - Sep Vanmarcke in the mix. [OK, Sep might not be on form yet, we'll see.] Quick Step are bringing the house, and it isn't hard to imagine Terpstra or Chavanel (2008 winner) acting aggressively. I suppose you could add Vacansoleil to the list of teams loaded for bear and likely to race hard. Devolder, Marcato, Leukemans, De Gendt and Bozic are all on the roster.