The season build-up may be slow and deliberate during March, but this weekend we finally reach the opening round of the World Cup, and one of the best races of the year, the Trofeo Alfredo Binda held in Cittiglio in the province of Varese. Where’s that? Watch the Crashdan style flyover they’ve made of the course and you’ll even be able to spot the place from the moon. 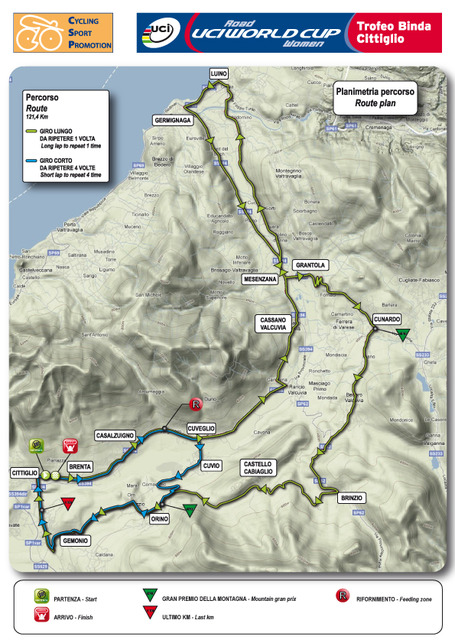 We’re in the very North of Italy, close to the Alps and on the Eastern side of Lake Maggiore. From Cittiglio the race follows a long and narrow loop northwards following the valley that leads to the small towns of Germignaga and Luino on the shore of Lake Maggiore, then returns via the climb of Grantola, 4km long with a gain in height of about 200m, which works out at about 5% average. It then heads on to a shorter circuit where the climb of the Orino gains those same 200m but in just 3km, i.e. at 7% gradient, and repeats that four times for a total race length of 121.4km, or about three hours of racing.

This race is one of the best run on the calendar and the organisers do loads of work trying to get local people involved and aware. You will need to understand Italian to get all the details on the official site, but here’s a little video clip of those organisers getting a prize from, the UCI for all that work, and deservedly so. After all how many other races have their official launch in a plane museum, manage to get Noemi Cantele posing in front of a jet and Monia Baccaille to prop her Italian Champion paintjob Cipollini up against something made from string and sealing wax.

One of the great things about this race is that it can be won in different ways. Last year Olga Zabelinskaya escaped on the final climb and the Dutch put in a huge effort to chase her down on the long run-in to the finish. In 2009 Vos won again, but this time from much smaller group after chasing down one of Emma Pooley’s characteristic long breakaways. In 2008 Pooley got away and was never seen again.

How will this year play out? Well Vos won’t be trying for the hat-trick this weekend as she is at the track Worlds in Apeldoorn, as is Giorgia Bronzini (although Jo Kiesanowski of Tibco is on the start-list). Reports coming out from the Trofeo Costa Etrusca last weekend where Emma Pooley escaped on the final climb and Olga Zabelinskaya led the way in chasing her down look promising, as those who were the liveliest last year. Facing them are Emma Johansson and her Hitec teammates who have dominated the early season races in the North of Europe and are looking to prove themselves South of the Alps, Nicole Cooke and Rossella Callovi who look to be the MCipollini leaders of choice at this point in the season, and Elisa Longo Borghini of Top Girls who has been the revelation of the season so far. Here’s the full start-list. I’d also keep an eye on the French national squad who with Sophie Creux, Julie Krasniak, Pauline Ferrand Prevot and Edwige Pitel have one of their strongest looking teams.

The race starts at 13:00 CET Sunday (beware – Europe switches to summer time Saturday night when the clocks go forward one hour) and the podium ceremony is timetabled for 16:45. The organisers have a Twitter account which they post to regularly, have promised a live ticker in Italian and English on the day of the race, and have brought in RAI who will show an hour long race highlights programme at 19:00 on RAISport2. And that ticker might just be enough for us to put up a live thread of our own and see what other news we can find through Manel’s Tweets and the like.

Map and profile via www.trofeobinda.com