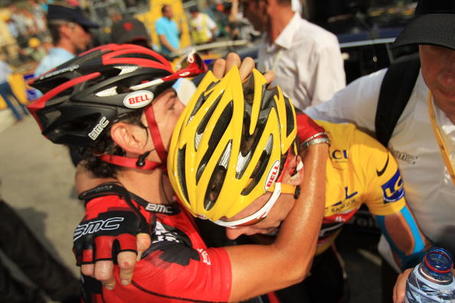 You all remember the photo, right? The moment came at the end of the stage 9 of the Tour de France last year. Cadel Evans, wearing the Yellow Jersey, rode through the inferno, over the Col de la Colombière, the Col de Saisies, and hors catègorie Col de la Madeleine, with a broken elbow. A young BMC team-mate Mauro Santambrogio rode tempo for Evans for much of the day. Watch again, as Santambrogio buries himself in the final kilometers to deliver his captain to the line, though by then, the jersey was lost, carried away by the inexorable ticking down of the clock. I’m sure you remember, because you aren’t the sort of people who forget such things.

And if you’re like me, you wondered who was this rider working so hard for Evans. And so I set out to learn about Mauro Santambrogio, who is currently 26 years old and came to BMC Racing from Lampre. I sent him some questions and he answered them. In Italian! Oh my grammar, she is so poor, but we persevered. Allow me to introduce you to Mauro Santambrogio of the BMC Racing Team.

First, another race snapshot. In 2009, Damiano Cunego started the Giro di Lombardia as the defending champion and aimed to beat the three-times mark he shares with some of the bigs of Italian cycling. The weather wasn’t half bad that day, but Cunego’s legs mostly were. On the Civiglio, Cunego sent his team-mate to the front all the same. From the aerial shots, Cunego's pilot fish looked close enough to be a body double with the same compact build. 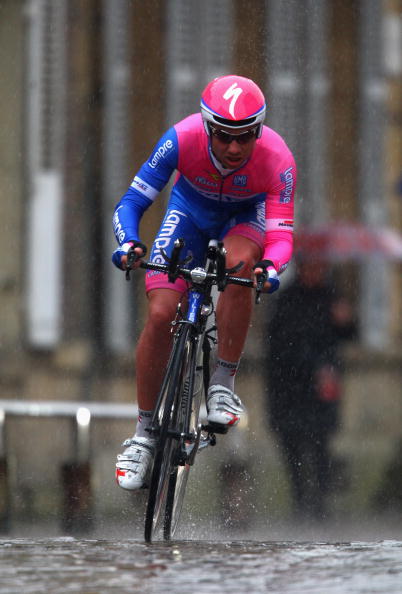 For a few seasons there, it seemed that Lampre only hired riders who looked like Cunego. Anyway, the rider on the front at the 2009 Lombardia was Mauro Santambrogio. Cunego struggled to hold Santambrogio’s wheel, and after the race, Cunego criticized him for riding too fast and not looking after his captain with sufficient care. The following year, Santambrogio rode for his own results at the Fall Classic. He finished eighth.

It’s no surprise that Santambrogio rides well at the Race of the Falling Leaves. He is from Cremnago, which sits not far from Como in the Lombardia region. "I adore training along Lake Como," he told me over email. The Giro di Lombardia is also the race he would most like to win before he finishes his career. "I dream of arriving solo in Como," he said. He has the characteristics typical of a successful Italian one-day rider, where it is necessary to climb well and finish fast. "I think I am a complete rider," he said. "I can hold on well on the climbs, and I have the speed for the small group sprint finishes," he explained. Santambrogio is a rider in the style of his former team-mate Cunego and of riders like Paolo Bettini.

Before joining the BMC Racing Team for the 2010 season, Santambrogio rode two seasons (and part of a third) for Lampre. His most important professional victory came in 2009 at Tre Valle Varesine, a hilly one day race in Varese. "It was a big victory that crowned all my sacrifices," he said. Did I mention that he is a climber with a fast finish? Santambrogio is happy with the switch to BMC, calling the team "marvelous." "It is very good for me at BMC, except for some problems with English," he said. Santambrogio has mastered basic bike racing English, but is not especially skilled with the team’s dominant language. Fortunately, Cadel Evans speaks fluent Italian and the two riders have a close friendship.

Unlike his former team-mate Cunego, Santambrogio has few doubts about his goals in the sport. When I asked the grand tour or classics question, he answered unequivocally: "I prefer the one day races, especially over 250 kilometers." His program for the 2011 season reflects his classics emphasis. He will race on the Strade Bianche at the Monte Pasche Eroica this weekend. Then, it’s off to Tirreno-Adriatico and the País Vasco to prepare for the Ardennes races. He said his preparation over the winter also put a greater emphasis on the classics, and he worked especially hard on his acceleration and his ability to match "the strong changes of rhythm" that characterize the one day races. At the recent Giro di Sardegna, the BMC rider finished tenth overall.

Santambrogio’s first main objectives for the year lie in wait in the Ardennes: The Amstel Gold Race, La Flèche Wallonne, and Liège-Bastogne-Liège. All three races suit his characteristics. In past years, he has ridden for his team leaders, but with Cadel Evans chasing victory at the Tour de France, Santambrogio will have more opportunity to ride for himself this Spring. 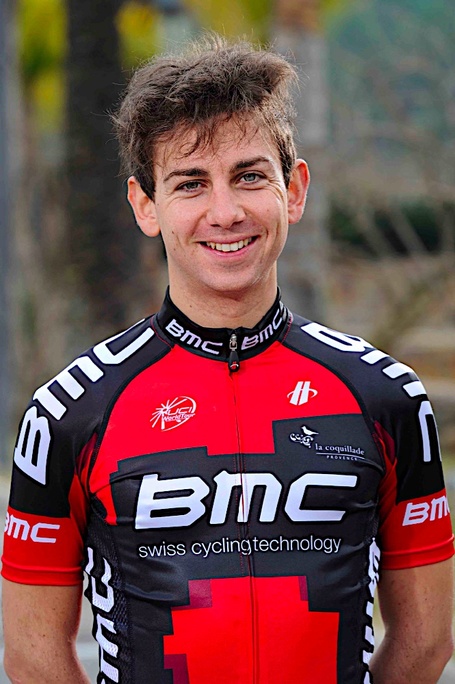 He will also ride the Giro d’Italia in search of a stage win in one of the many hilly stages on offer. Zomegnan did not smile upon the sprinters this year, and the small group sprint specialists should find plenty of opportunities to shine this time around. Santambrogio will skip the Tour this year, and he will finish his season at his home race, Giro di Lombardia.

Every rider has certain rituals, sometimes without even noticing it. Before each race, Santambrogio kisses the ring from his fiancée Giulia. He also likes AC/DC for motivation. I think we should start a new Cafe tradition: They tell us one of their favorite bands, we come up with a playlist. So, hard core fans, let’s hear it. What should we add to Santambrogio’s iPod?

But back to that photo. "I didn’t know anything about Cadel’s fracture," Santambrogio recounted. The young Italian rode his heart out for Evans. "I gave body and soul for him and I tried to bring it all back," he said. It was a "very difficult" stage over three major cols in desperate defense of the Yellow Jersey. The stakes are rarely higher in cycling than they are at the Tour de France with the race lead on the line. Battered, Evans finished the day eight minutes behind Alberto Contador and Andy Schleck. In a twist of cycling fates, Damiano Cunego also played a role in the day’s drama, and finished third after a long ride in the break. For Santambrogio, it was a "memorable" stage. As the Italian tells it, the day "ended with an huge spontaneous embrace." Getty photographer Spencer Platt caught the moment perfectly. Ah cycling, che emozione!

Comments from Mauro Santambrogio translated from the Italian by Jen See.