There Will Be Points! Upcoming PdC Calendar Events

Share All sharing options for: There Will Be Points! Upcoming PdC Calendar Events

Oh, you can complain that the Podium Cafe doesn't start its competition schedule early enough, but once we do, it's full throttle. After six races over the weekend and Le Samyn yesterday and the Giro del Friuli today, we embark next on another phase of the early season bonanza: Spanish stage races! Let's run down the upcoming action...

Just one women's event in the next week, the Omloop van het Hageland - Tielt - Winge, which is fully previewed here. Mega-startlist here.

Tuscany has done a fine job convincing fans that it's the Flanders of the South, thanks to Monte Paschi -- Strade Bianche. The course info is on the official page, and an eyeball comparison suggests it's identical to the 2010 course. Since the new version is illegibly small, here's what it looked like in 2010 (click on it to enlarge): 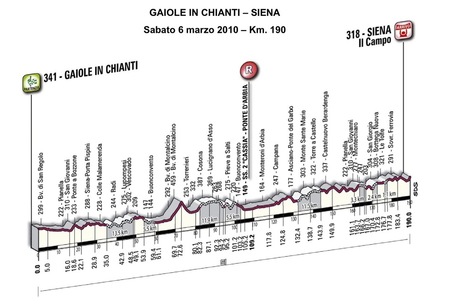 RAISport 2 has an hour of coverage scheduled for the evening, probably not live. This race has been seriously under-broadcast, so hopes aren't great.

Paris-Nice time. The Race Desperately in Search of to the Sun kicks off with a circuit around Houdain, which should end in a nice bunch sprint, and with that in mind local officials have already issued a Peter Sagan Watch, in effect through Wednesday when the race reaches the higher mountains. Almost everyone in his right mind is at Tirreno-Adriatico instead, but Taylor Phinney will be saddling up for BMC, and Tejay Van Garderen might get the go signal for the overall for HTC. Some serious contenders, besides Tejay, will include Jurgen Van Den Broeck, the Astana duo of Vino and Kreuz, and of course Luis Leon Sanchez Gil, hoping to open his Rabo account in style.