Paris-Nice on Versus TV

Share All sharing options for: Paris-Nice on Versus TV 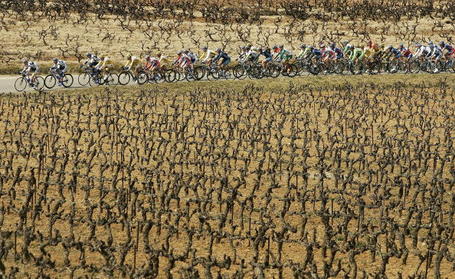 The 2011 edition of Paris-Nice starts this Sunday with a road stage in Houdan. The race runs eight stages and concludes with the traditional finish over the Col d'Eze in Nice. There is one time trial, a 27 kilometer romp in Aix-en-Provence on Friday. Here in the United States, Versus will cover the race daily in HD. They will not offer live stream. Instead, the race will appear on real television each day.

A reliable source has told me that the viewer numbers for Paris-Nice could have a significant influence on decisions about how much cycling the network covers in the future and in what formats. Apparently, the numbers for the live streaming coverage of the Tour of Qatar were pretty dismal. Like, I think maybe only the Cafe and the riders' moms watched the race? And maybe only just some of the moms? I don't have too many details on this side of the story, unfortunately. Podium Cafe requested comment from the Versus network, but no one responded. I did get the impression that if we want to see bike racing here in the United States on television, it would be a good idea to show up for Paris-Nice. If you have a spare moment, you might also drop the people at Versus an email telling them that you liked the coverage and want more. More is better!

From the press release:

Here is the current schedule for coverage: