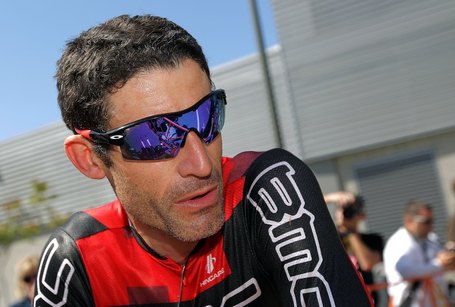 It's easy to say that Hincapie's best days are behind him, but neither he nor reality is so sure. After a spring season when the team flew him to the Tour Down Under to help fly the flag in anticipation of a Tour de France bid, Hincapie showed up in Flanders in his best form in years. He took a flier on the sprint for the Gent-Wevelgem win (won by the faster Bernhard Eisel, after thundering up to the winning move on the Rodeberg. He came over the Muur with the first chase group, finishing sixth behind Tyler Farrar in the Tour of Flanders. He was right in the thicket of riders who watched helplessly as Cancellara stole away from 40k or so in Paris-Roubaix, taking ninth in the resulting run-in to the velodrome. All while helping build the BMC team up from its Swiss roots into an American superteam.

Hear how he's coming along, how he views the classics calendar, and what his season's priorities are... on the flip!

PdC: To start with, how is your form?

GH: Good! I've been home for the last three weeks and training here, the weather's been good. I haven't raced yet, so it's hard to gauge my fitness, but in race conditions I think it'll be really good.

PdC: It seems like the last few years you've varied your winter training a fair amount. In 2009 you had the Tour of California in February, last year BMC were looking for a Tour wild card and there's been talk about how you (the team) were auditioning for a Tour de France bid, maybe doing a little bit more in spring than you prefer to. Does this winter have a more relaxed or organized feel to it?

GH: Well, in the sense that I'm traveling a lot less, I can really focus on my training and my motivation, and really take care of my body to the maximum extent by staying home and focusing on being fit. I start racing in March [his first race is tomorrow's Strade Bianche] which is later than normal, last year I started at Down Under very early and then had six weeks off before my next race. So the only real difference this year is that I'm not doing Down Under*, not traveling as much as I did last year.

[*Interview was in late February, verb tense notwithstanding.]

PdC: Last year was a strong spring for you in terms of results, much better than 2009. Can you attribute that to anything in particular?

GH: Not really, in 2009 I was probably doing more work for the team early on in the spring. 2010 I had some days when we really needed points, really needed results, there was a bit more pressure on me to get some results early on. But 2009 and 2010 I still focused on the classics. You can't always hit it right on the spot when you want to be at your best.

PdC: OK, a couple questions about Gent-Wevelgem. First, a year later, how do you feel about the change in the calendar? Would you have wanted to do E3 Prijs or are you fine with just doing Gent-Wevelgem as your main pre-Flanders race?

GH: I enjoyed doing it, I thought it gave the race a bit more recognition doing it on a Sunday. It's such a well-known race anyway, such a long history that I think it deserves to be on a Sunday and be one of the bigger classics. And for me it was fine to just do the one hard effort on Sunday and then rest for the week before the Tour of Flanders, I thought it was perfect preparation.

PdC: OK, and the course changes, from a distance you can see that they've claimed to raise the number of climbs, it was 16 last year and it's up to 18 this year. Did it really feel like a much harder race than in the past?

GH: Not really... the climbs they added, they made it harder in the sense that you had less time to rest before the Kemmel, but they weren't anything that was crazy steep or too difficult. But they made it easier to stay away once you got away and get a small group established.

PdC: As to it having more of a claim on the prime Sunday spot, can you elaborate? It's not just a dress rehearsal for the Tour of Flanders, right?

GH: Yeah, well, the first thing is, the race has a lot of history, it's very well known among the cycling community around the world. But also the course is a challenge, it goes over the Kemmelberg two times, one of the most famous climbs in Belgium. That's usually the deciding factor. And then they threw in these other climbs and made it even more difficult, and made the race a bit longer as well. I think they did everything they could to make it a more established classic. 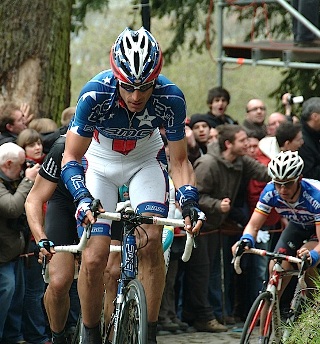 PdC: Looking forward to this year's classics, Garmin have brought on a bunch of guys, BMC added Quinziato and Van Avermaet to your roster. Is there a difference between having 4-5 guys in at the end of a race or is it enough to have a couple guys and be good to go?

GH: well, it's definitely ideal the more guys you can have, you look at Quick Step the last few years in the Tour of Flanders when they'd have 5-6 guys left with 60k to go, they can send guys up the road and the leaders can sit back and let other teams do the work. It's definitely a better situation to have more guys near the finish.

PdC: And what will it mean to have Quinziato and Can Avermaet on the squad this year?

GH: Oh, it's great, for us it's huge. I mean, Van Avermaet and Quinziato are experienced in the classics and are both right up there. I'm excited to race with them, they're both nice guys, I got along great with them in camp, and I'm really looking forward to starting the year with them.

GH: Heh, if he's going like last year it's going to be tough. He was definitely going a lot stronger than everyone and had a good team behind him. But it's a new year, we have new hope that we'll be competitive against him.

PdC: How important is it to dictate the pace early in the race?

GH: It's not really a matter of dictating the pace for guys like Cancellara or for our leaders, it's more a matter of keeping guys at the front and saving as much energy as possible, making it hard for the others. You want to conserve energy and stay on the wheel of your teammates, with all the position battles going on, that's where you can burn a lot of energy.

PdC: What are your plans for the Tour of California? Now that they've moved the National Championships are you still focusing on the general classification, or stage wins, or just prepping for nationals?

GH: The Tour of California is definitely a priority of mine and the team's. I think with the hard mountain top finish the general classification might be a little bit too hard for me, but stages are definitely within my abilities, I've won I think 3-4 stages already and I'd like to win a few more.

PdC: Have you seen the new mountaintop finishes up around Tahoe or Mount Baldy?

PdC: WIll you have a chance to look at them beforehand?

GH: We're going to go up there about a week before the race so we'll probably see some of it.

PdC: The fact that the Tour of California has gotten so much harder, is this a good thing? Is it becoming a good alternative to the Giro d'Italia in terms of your program?

GH: I think so, the race is hard, it's important for American teams and sponsors, and it's become a well-recognized race among the cycling community. It's not just about the Giro, people know if you win a stage of the Tour of California, it means something.

PdC: Is it at the right level of difficulty for prepping for the Tour?

GH: I think it's perfect. I mean, look at Andy Schleck, he raced it and he wasn't at his best there but he was at his best in the Tour. So for those guys I think it's great preparation, it's worth the trip over. I think the Giro, if they go out and race it hard for three weeks straight, it may be a little too hard, but California's eight days so I think that's a bit better.

We spoke a bit more about the summer -- Hincapie is definitely planning on racing the Quizno's Pro Challenge and expressed excitement about having a second major stage race, which then leads into the Quebec races. A real North American season would give those Euros a reason to get on a long plane ride.

As with Boonen, whom we profiled a few days ago, the results don't necessarily suggest that Hincapie has lost anything from his impressive peak days. He's 37, so reality is waiting just around the corner, but the beauty of the classics is that it doesn't have to hit him this year, and it doesn't cost him a slow erosion of his abilities as age does much sooner with sprinters. Andrea Tafi was 36 when he won de Ronde in 2002; Andrei Tchmil was 37 when he won two years earlier. Gilbert Duclos-Lasalle was 38 when he won the 1993 Paris-Roubaix. Those years come with some red flags, I suppose, but historically older riders have known plenty of success on the cobbles. The competition may be improving, and Hincapie's best probably doesn't stop Cancellara at his peak, but the window for America's best-ever classics rider is still open.