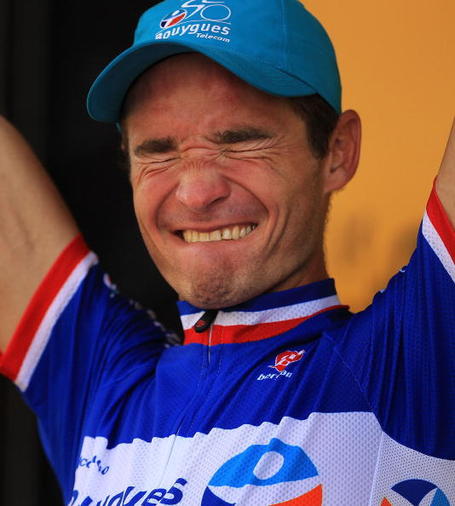 Just yesterday, Voeckler was saying that more riders needed to attack. Today, he put actions to words and won today's stage of Paris-Nice. In Belleville! Really, we should have planned a group viewing. Voeckler spent the day in the break before outsprinting Rémi Pauriol at the line. Race leader Thomas De Gendt also went with the escape and retook the leader's jersey for another day. It's a good day to be a Thomas, apparently. Heinrich Haussler won the sprint four fifth. Barbie! Full results. Tomorrow, Paris-Nice goes out for some climbing. The stage passes over seven categorized climbs, including the Col de la Croix de la Chaubouret and Col de la Mûr. The profile, for your viewing pleasure.

Meanwhile in Italy... Lars Boom! Rabobank won the opening time trial at Tirreno-Adriatico. Garmin-Cervélo finished second, HTC-Highroad third. The lovely people at Gazzetta have today's results. Boom gets to wear the leader's jersey firstest. I think I feel swoony. Tomorrow's stage involves a couple climbs, but isn't all that difficult. It should end in a sprint. Stranger things have happened, but really, there's only one Thomas Voeckler.