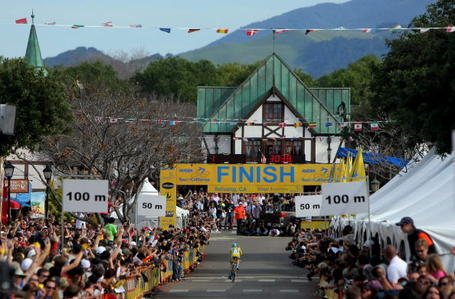 Last weekend, the news emerged that the Amgen Tour of California plans to host a women’s time trial in Solvang. The proposal sparked criticism largely due to an unusual plan for the women’s prize purse. VeloNews reported that the woman riders would be paid based upon how many of the men’s times they beat. Though the proposal provoked significant debate, details from the race organizers remained scarce. Monday, I had the chance to talk to Andrew Messick, President of AEG Sports, about the proposed women’s time trial.

The women’s race will run over the same 24 kilometer course as the men will ride. Last seen in the 2009 edition of the race, the Solvang course runs over rolling terrain through vineyard lands with the start and finish on Solvang’s main street. A ten minute gap will divide the women’s race from the start of the men. The timing should ensure a large audience for the women’s event.

The women’s time trial will include around twelve riders. Though the majority of the field comes from elite road racing, Messick suggested that a rider or two from triathlon might also participate. The riders invited so far include many of the top time trial specialists in women’s cycling, and the Amgen Tour of California expects to announce the full list on Thursday. Messick also said the women’s event would receive "at least 10 minutes of television coverage," a rare prize for women’s racing. "The exposure will be great for them. It’s a real bummer that women’s cycling is so under-reported and doesn’t get the respect it deserves," commented Messick.

Most observers agree that the Solvang time trial offers a good opportunity for the women riders to compete on a big stage. At the same time, critics have dismissed the prize money scheme, which measures the women against the men’s times, as "gimmicky," and a "circus side show." Some observers like Gerard Vroomen also suggested that the women might ride fast enough to exhaust the prize pool by beating too many men.

Messick said the criticism surprised him. "We aren’t trying to do a Bobby Riggs thing or turn the women into a sideshow." Instead, Messick hopes the comparison will serve to show the talent and seriousness of the women riders. "The women can time trial!" said Messick, who noted that he regularly rides with top-level women riders. He views the comparison with the men’s race as "a way to show-case them." 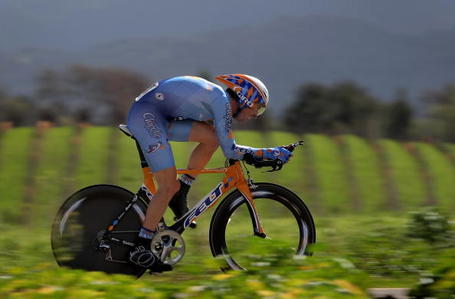 "That comparison is going to happen anyway," argued Messick. He believes that people will look at the results to see how the women’s times measure up with the men’s times, because they will race the same distance on the same course.

"Why bury the lede?" he asked. In his view, setting up the race as a competition between men and women is "attention-grabbing" and his goal in proposing it is to draw a greater response from the mainstream media. "Is it better to have a broader audience by using a marketing hook?" he asked. The question raises the dilemma of how to sell women’s sports.

At the same time, Messick acknowledged the significance of the criticism. "We don’t want to alienate the people we are trying to help," he said. He recognizes that most people involved in women’s cycling participate because it’s their passion. "There’s no business model that pencils out," Messick noted of women’s cycling. He also commented that none of his sponsors are especially interested in women’s cycling, so there is no pressure to hold a women’s event.

The decision-making on the women’s time trial is not finalized, according to Messick. The organization could yet change the event plan and offer a straight purse to the women riders. The AEG Sports President made clear that the television coverage is not contingent on the men versus women "marketing hook." The goal of the race is to have "a serious conversation about the competence of the women," he concluded.

The Amgen Tour of California will announce the final details and the riders invited to the women’s Solvang time trial on Thursday. It’s possible that the race will decide to offer a straight purse to the women, but from Messick’s comments, it also sounds possible that the race will commit to the men versus women angle. Messick said the final decision would be made in the coming days.