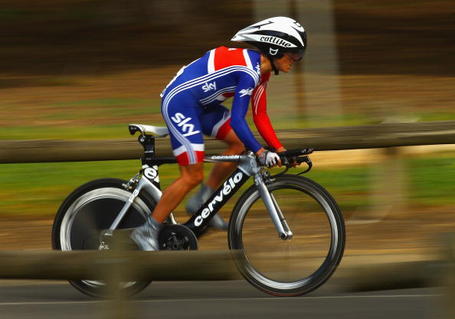 The Amgen Tour of California has officially announced Women's International Time Trial Challenge, which is set for 20 May 2011 in Solvang. The women's event will run just ahead of the men's stage 6 time trial. The women will race against the clock over the same 23 kilometer course as the men.

Olympic gold medalist Kristin Armstrong, World Champion Emma Pooley, U.S. National Champion Evie Stevens, and former World Champions Amber Neben and Judith Arndt are among the riders expected to attend. Twelve women comprise the field and they will compete for a $10,000 prize pool. SRAM and Specialized have signed on as presenting sponsors for the event, and Versus will feature the women's race during their coverage of the stage. Start time for the race? 11:30 am, Cali time.

Andrew Messick: "Beginning with the women's criterium race during the 2008 edition of the Amgen Tour of California, AEG has always been a supporter of women's cycling," said Andrew Messick, president of AEG Sports. "We are pleased to be able to celebrate the tremendous athleticism of these world-class competitors by providing an international stage on which to showcase their ability."

The race organizers are presenting the event as a preview of the 2011 World Championships and of the 2012 Olympic Games. And indeed, the riders confirmed so far count among the favorites to win those events. You can read the full statement over on the Amgen Tour of California website.