Alison Powers of Team TIBCO: The Skills to Pay the Bills

Share All sharing options for: Alison Powers of Team TIBCO: The Skills to Pay the Bills 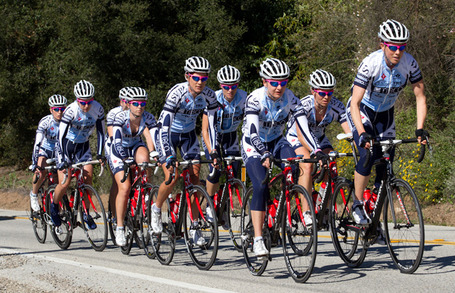 Every time that I’ve talked with Alison Powers about cycling, racing, and about her life in general, I always walk away feeling, well, stoked so when I was offered the chance to call her up and have a chat I knew I had to say yes.

First of all, when it comes to bike racing, Alison Powers is better than jam on toast. Powers, who is entering her 5th season as a professional cyclist, has an impressive list of results that indicate that not only is she talented but that she is also versatile. In taking a look at her results I was struck by how she has been able to compete at the highest levels and produce results in dramatically different venues.

Doing well at one race is all very well and good, but the ability to put one’s name near the top of the NRC rankings at the end of the year proves that one isn’t the Right Said Fred of cycling but someone more along the lines of the Rolling Stones. It requires top results at most of the races and the maturity to hit the reset button and mentally recover from a bad race. It requires an athlete to start healthy and stay healthy through a season that, at times, seems to stretch off into oblivion. Alison Powers was able to do all of this in 2009 during her 3rd year as a pro while riding for Team Type 1, which she told me “was the most fun I’ve ever had racing my bike”. In 2010 she finished 2nd overall in the NRC standings even though she “wasn’t having fun racing my bike”.

And let’s not forget that Powers is a National Time Trial Champion. In 2008 only her second year as a professional cyclist while she was riding with Colavita/Sutter Homes, she posted the fastest time on the California course and won herself a fancy stars and stripes jersey. Followed by two very respectable finishes in the top 5 in 2009 and 2010 on a course that she told me she has never liked. “I’ve never felt strong on that course. It’s hilly and it’s hot.” A 3rd place finish and a 5th place finish on a National Time Trial Championship Course that isn’t drawing on her strengths? I’m impressed (and excited to see what she’ll do in the future).

Powers top results aren’t just confined to road cycling either; she’s got a couple top mountain bike results including a top 20 finish at the 2009 Cross Country Mountain Bike Nationals. Even further down her racing results list she’s got a 3rd place at Junior World Ski Championships along with several other top international ski results. She spent 7 years (!) on the US National Ski Team before she started racing bicycles. To use the parlance of our time, Alison Powers has the “skills to pay the bills.”

But if she was doing so well on the skis and in the snow, why the switch to road racing? Perhaps the international fame, glory, & obscene prize checks for female cyclists? Oh, wait... Simple and relatable story actually: Alison told me that she always cycled in the off season as a way to cross-train for skiing, but that she only started cycling more seriously and racing after she injured herself and was unable to ski for a period of time. She entered a local road race in Colorado, found that she enjoyed the racing, and began training more seriously for cycling specifically. So, cycling it was.

Yes, well, elite athletes with biggity results are all well and good but it does take a bit more than biggity results to get me really stoked but Alison Powers hits it. As someone who has, on more than one occasion, pulled on the grumpy pants, I find Alison Powers’ direct and positive outlook on life and racing admirable and enviable. But, before my fellow comrades-in-grumpy-pants skip on to the next article, let me just clarify; Alison Powers’ positive attitude isn’t annoyingly Pollyana-ish but a positive attitude that is tempered by a measure of realism and pragmatism. It’s a winning combination.

Alison Powers told me that she contemplated quitting racing after her less-than-ideal 2010 season but that perhaps getting injured at the end of the season might actually work out for the best. No one wants to get injured and it’s hard to see how being forced to take 6 weeks off the bike might be a good thing, but she admitted that after a less than thrilling 2010, her 6 weeks off the bike allowed her some time to mentally reset and get herself prepped for her 2011 season. She told me “I kind of enjoy the process of becoming fit”.

This year Alison will be racing for Team TIBCO and she told me that the goal for their year was to win the NRC team rankings. While I wouldn’t presume to state that it’ll be a cakewalk for the women of team TIBCO, when I look at the women who make up team TIBCO, it is clear that winning the team NRC championship is a very achievable goal for them. Each and every woman on Team TIBCO is a brilliant racer in her own right and so with Team TIBCO’s depth of talent I wouldn’t be surprised to see a variety of Team TIBCO women acting as the key rider at different races depending on the race and the conditions. As Alison told me that “It’s nice. We can decide who to work for based on who is feeling good.”

Alison stated that her goal for the season was pretty simple; she just wanted to have fun racing her bike. Racing for an established team with a successful track record with talented teammates? Sounds like fun to me and I’m looking forward to seeing her race in 2011.

That was then, this is now. Redlands Bicycle Classic is the first event on the NRC calendar. As a short stage race held in Redlands, CA, it offers NRC teams a gentle entry back into road racing. A short stage race in sunny Cali when so much of the country is just barely waking up from winter? Sounds lovely. A short uphill prologue followed by 3 stages is just enough to get a new team together and see how all the pieces will fit together without blasting legs that are still warming up from winter. That being said, the 60 minute criterium, which is held in downtown Redlands and is the second of the three stages, is no four-cornered Wednesday night practice course. The crit, which the race bible modestly describes as “highly technical” has 9 (!) turns, four of which are tighter than 90°.

So, off Alison went; from her home in Colorado out to sunny California for the the first NRC race with TIBCO and, looking at the results from the first two days, it looks as if it all started well. After the prologue and the first stage, Alison was sitting in 7th in the general classification while her teammate, Erinne Willock was sitting in 6th. It was all looking like a pretty good start to the season for both Alison and for TIBCO.

So, on Saturday, they all lined up for the crit but unfortunately not everyone crossed the line. Alison, along with several other women, was involved in a significant pile-up that occurred during the last half of the crit and was packed up into the A Bus for a trip to the hospital. I asked Alison about it and she stated that “We were having a good time in the crit. We had a team plan to go after some time bonuses, which we got. We were racing very well.” But as crashes happen in cycling, Alison told me that the woman in front of her fell “I don’t know if she crossed wheels or what, but she fell, and there was no where to go.” Alison hit her, somersaulted over her, and was left lying on the ground but thankfully “nobody crashed into me”. Alison told me that she and two other women were immediately sent off to the hospital and that at least two other women were sent off later.

At the hospital, Alison learned that she shattered her olecranon, which is a bony process that sits at the top the ulna and forms part of what most of us just call the “elbow”.  “I didn’t even know there was such a thing as the olecranon” Alison told me. Yes, well, but what does this mean for the rest of your season, I ask her? “The first doctors in California said it would be 6-8 weeks before I can ride outside”. I did the math on the calendar in my head but she continued “But the doctors here, who understand athletes, said a good 12 weeks.”

It was easy to see with this time frame that the Time Trial National Championships at the end of May are on the outs, but even though Alison wouldn’t be able to race, she still was able to be positive without breaking into Pollyanna territory. “The courses would have been cool...but the heat and humidity would have killed me. I’m sad for my team because I won’t be there to help in the crit or the road race.” Thankfully, though, it sounds as if everyone at TIBCO is making sure Alison doesn’t forget them; “I’ve gotten emails from all the riders and all the staff. I still feel very loved and very much like a part of the team.” So, I guess if everyone with TIBCO can wait a little longer to see her race, I can practice my patience too.