From Flanders' Lips to Amstel's Ear?

Share All sharing options for: From Flanders' Lips to Amstel's Ear? 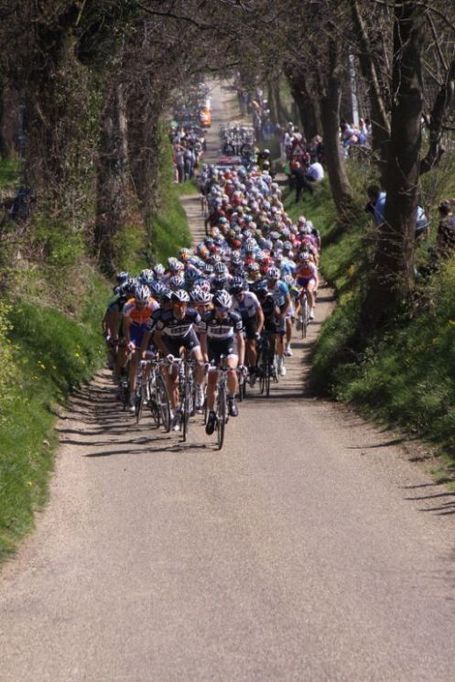 Sure, you can knock Sunday's Amstel Gold Race for being the new kid on the block of "Ardennes" races. You can knock it for not actually being in the Ardennes. You can knock it for being sponsored by, um, not your favorite beer. [I'll take it over Oranjeboom any day.] But you can't say it's devoid of character, far from it. Personally, I love its beautiful, pastoral scenery, selective climbs, and skinny little "roads" that bend this way and that with diabolical frequency.

OK, this is a bit of a humor-me post, but back in the day the classics were something of a lump sum, with fewer specialists in one particular race or another. I know, stop the presses. But another factor were the courses themselves, which in some cases have evolved to play to specialties. Amstel Gold is one of them. Prior to 2003, the race finished in Maastricht, on what I presume was a flat finish, which meant that the race catered to guys who could survive the hills well enough in time to regroup for a late scramble, even a sprint. Not so much a climbers' race as a race for people who like a good hard day in the saddle.

OK, now does it sound familiar?

Just so I know I'm not cRaZy, here are the list of winners of both Amstel Gold and de Ronde van Vlaanderen: Walter Planckaert, Eddy Merckx, Jan Raas (did the Amstel/Ronde double in '79), Adri Van der Poel, Johan Museeuw, and Michele Bartoli. (Merckx, Bartoli and Van der Poel won LBL too.) Sure, since the finish was moved to the top of the Cauberg, it eliminated the Dekkers and Zabels who used to conquer the race and replaced them with a seemingly endless array of Vinokourovs, DiLucas, Rebellins, Schumachers... wait a second... ah, and Cunegos, Gilberts and so forth. Basically, guys who can climb, and if they bear any resemblance to the Tour of Flanders set, it's purely coincidental. As far as the victory is concerned -- and yes, that's mostly all anyone cares about -- it's not a climbers' race.

But that really only describes the finale. Just nudged off the podium by the Cauberg are the same type of al-rounders who thrive in Flanders. Look at 2010: from the top echelon of last year's Amstel results (guys within 4', as opposed to the gruppetto which was 10' back), you see guys like Bert De Waele, formerly 10th at de Ronde and 4th at E3; Karsten Kroon with four top 20 Ronde finishes, a high of 4th; Sylvain Chavanel, 2nd in Flanders this year (I'm told); Bjorn Leukemans, now a fixture in the top 10 in Flanders; and Nick Nuyens, this year's Mooiste.

The point isn't that Flanders and Amstel are all that similar; the climbs in Limburg are longer and more plentiful, and the cobblestones manageable, enough to bring in the little climber dudes who mostly avoid Flanders like the plague. But there are some shared characteristics in those winding, twisting roads, and the climbs aren't so selective in Limburg as to close the door on a bunch of the more vertically-inclined cobbles dudes. The point is that the classics season isn't quite as binary as Cobbles-versus-Ardennes, that Philippe Gilbert is hardly the only human capable of doing well in both Flanders and Amstel (even if he's more capable than the rest), and that many cyclists have several items in their bag of tricks which they can mix and match to a variety of terrain. Amstel is not purely a climbers' race; I guess I'd label it an all-rounder's race with a climbers' finish. Great climbing gets the headlines, but great cycling is still the main course. Watch it on display this Sunday.

Photo courtesy of... who sent in all the Amstel photos last year?