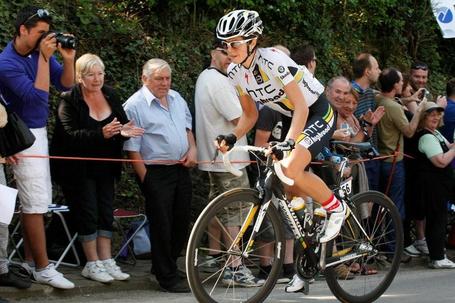 Evelyn Stevens is the current U.S. National Champion in the time trial. She rides for the powerhouse HTC-Highroad squad and boasts results from some of the biggest races in cycling. Four years ago, she did not even own a bicycle. "I used to sit in conference rooms and imagine flying away," she told me. Stevens lived in New York City and worked as an investment banker at Lehmann Brothers. She knew nothing of intervals, compression tights, derailleurs, or any of the other accoutrements of the bike racing life. Now, she lives in Girona, Spain and the road is her office. Stevens has no need to imagine flying away, for "riding the bike is like flying." 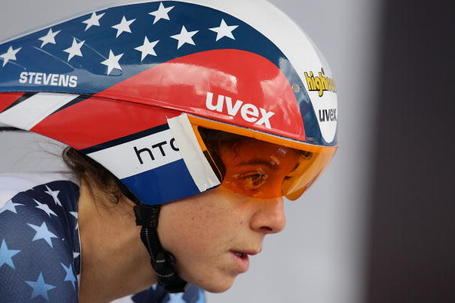 The first time Stevens entered a bike race, she rode cyclocross in Northern California. Stevens had travelled across country to visit her sister. "Guess what! I signed you up for a cyclocross race!" Stevens recalled her sister saying. The day before the race, Stevens rode Mount Tam, a nice uphill jaunt to open up the legs. Anyone who has ever ridden Mount Tam knows that while the view is nice, the climbing is hard. Stevens said of her first race: "I crashed and burned."

Back in New York City, Stevens decided to buy a bicycle and start riding. She had recently transferred to a less time-demanding job. She bought a $1000 Cannondale, which she viewed as a big step. "I never made big purchases," said Stevens, and she remains amazed by the equipment she receives from HTC-Highroad. At first, Stevens rode only in the park and refused to ride on the roads. "Bike riding was intimidating," she recalled. A friend convinced her to participate in a women’s clinic, which required an early morning wake-up call. It turned out to be worth it. "I had only been on my bike four times. But I loved it!" Stevens said of the experience.

More races soon followed that first clinic, and Stevens quickly drew attention by scoring some big results during the 2009 season. She won the overall classifications at the Fitchburg Longsjo Classic and the Cascade Classic, scored a stage win at the Route de France Féminine, and finished second in the individual time trial at U.S. Nationals. She also rode for the U.S. national team in the road race World Championship in Mendrisio, where she played a prominent role in toughening the race for team leader Kristin Armstrong. 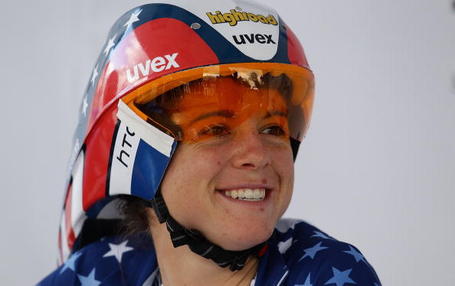 Each lap, Stevens went to the front and set a punishing tempo up the climbs. Armstrong finished fourth, just off the podium, after Italians Tatiana Guderzo and Noemi Cantele out-played the Americans in the finale.

Who was this rider who had apparently come out of nowhere? Though new to bike racing, Stevens played tennis at Dartmouth. "I think I’ve always been an endurance athlete," she said. Though not obviously an endurance sport, tennis gave Stevens the first hint of her athletic personality. "My matches would be long, and the longer they went, the more likely I’d be to win," she explained. She pushed her opponents toward fatigue and tried to force them to make mistakes. But Stevens never expected to become a professional cyclist. "I didn’t think about what I was doing until I was there," she said. She came to the sport without expectations. "I just started riding to ride, not to be a pro cyclist."

In 2010, Stevens signed her first professional contract with HTC-Highroad. She credits the team with helping her to learn the nuances of the sport and to develop her talent. "I feel fortunate, I’m surrounded with people who are invested in my career," she said. The experienced women at HTC-Highroad have eased her transition to the pro ranks. "There’s a really good chemistry on the team. You can really feel it," Stevens emphasized. Stevens finds team riding "very satisfying." One of her favorite race days from last season came at the Giro delle Toscana. Noemi Cantele, then racing for HTC-Highroad, had joined the early break, which looked likely to survive to the finish. Stevens sat in the field. "I bridged up to her, and led her out for the sprint," recounted Stevens. Cantele won the stage and finished third overall.

Stevens finds some parallels between her old life and her new adventures in pro cycling. Investment banking and cycling both require the ability "to work with a team in a high stress situation," she explained. 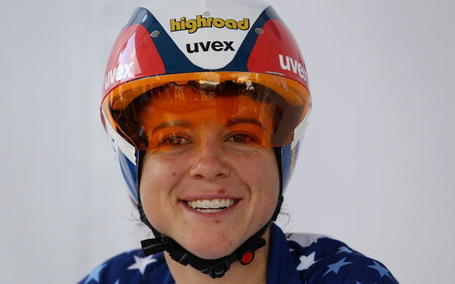 A good bike racer remains clear-headed amidst the chaos and can see clearly the tactical landscape. Cycling "requires making decisions in high-pressure situations," a skill which Stevens said carried over from her past experience in banking. Cycling, like investment banking, also requires commitment. "It isn’t just four hours of training. You have to commit your life 100% to cycling," commented Stevens.

At twenty-seven years old, with just three seasons of elite racing in her legs, Stevens continues to learn her trade. "I still have a tremendous amount to learn," said Stevens. She especially wants to learn to move around the field more smoothly. Stevens called "getting out of the wind" the area she most wants to improve about her racing. "I’d like to win a race in Holland someday," a surprising statement from a climber like Stevens. The challenging races in the Netherlands appeal to her, because they do not necessarily suit her talents. Stevens is all admiration for the women who thrive on the tricky Dutch roads. "The Dutch women, they’re so smooth, they could have a tea party on their bikes."

Stevens has yet to win a race in the Netherlands, but she did win a stage at the Giro Donne in 2010. "I got dropped on the descent, and then I came back," she said of her victory in Albese. It remains her favorite result of her career so far. "I loved the Tour de l’Aude, racing in Italy is always fun." Really, Stevens likes all the races. "The Holland Ladies Tour, that one is maybe not my favorite," she admitted. All the same, Stevens plainly has a boundless enthusiasm for racing. "I like to train, but I like to race more!"

There is nothing easy about cycling as Stevens has discovered. "It’s hard, it’s mentally hard." Even talented riders have their rough days, and every rider has to learn to push through them. "In the race, it’s staying positive and making sure your mind and your body work together," she explained. Stevens views the ability to ride well on a bad day to be the mark of a true professional. "Riding well is about getting in the right mental place." Stevens calls the process "zoning in." The individual time trial, in particular, requires intense concentration, and Stevens has from the start of her short career shown a talent for the discipline. In 2010, she won the U.S. national time trial championship and finished sixth at Worlds in Geelong.

Ask any coach and you will likely hear that recovery is as important as training. Surprisingly, Stevens finds the off-season the hardest part of cycling. "My life in New York was all go, go, go," she explained. The enforced rest that is part of the cycle of the racing season is unfamiliar to Stevens. 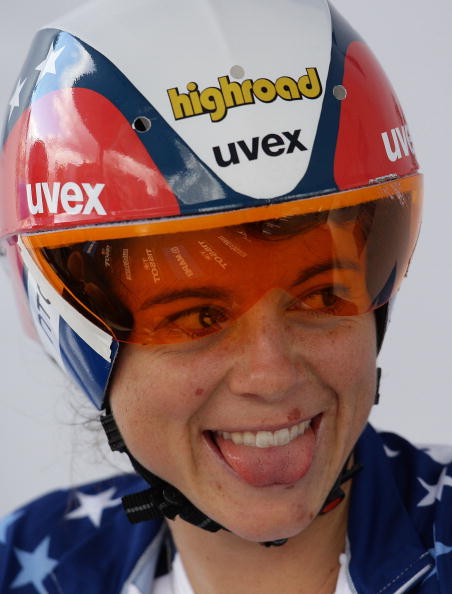 She has adopted new hobbies, including cooking. She also spends enough time with her Kindle that she can not remember the names of all the books she has read recently. She especially likes historical fiction and named David Benioff’s City of Thieves and Julie Orringer’s The Invisible Bridge, both set during World War II, as current favorites. "I’m getting better at the down-time," she said, and Stevens has begun to enjoy the slower pace of life during the off-season. "You can be so busy you don’t have time to think," she said of her life in banking.

During her brief career, Stevens has invented her share of pre-race rituals. "I’m trying to tone my superstitions down," she admitted. One season, she had lucky water bottles. That ritual lasted until she went to Redlands and realized that she would have to toss her bottles in exchange for new ones. Asking her team to retrieve her special bottles seemed a little over the top. Last season, she always wore hair bands on her fingers for big races. This year? Stevens admitted she has a lucky sports bra. Do not touch the girl’s laundry!

Looking ahead, Stevens hopes someday to win Flèche Wallonne before her career is done. The storied Mur de Huy with the dense crowds lining the road inspires her. This year, she rode off the front solo for 40 kilometers. She had hoped to have company in the effort, but the other teams proved content to wait for the final climb. No matter, for Stevens will certainly have a few more chances yet to try for the win.

In the meantime, she will keep developing her talent and hope that someday she too will ride smoothly enough to host a tea party on the bike. Watch for her before the next race rocking to Muscles and "zoning in." And when the road turns up, Stevens will be right there near the front, ready to seize her chance and claim her next victory.

Thanks to Patrick Verhoest of Torhout, Flanders for the top photo of Stevens on the Mur de Huy at the 2011 Flèche Wallonne Femmes.