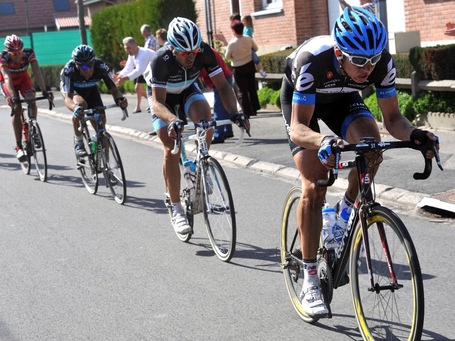 Sep Vanmarcke knows it's not as easy as he sometimes makes it look. The Garmin-Cervélo classics hope will be the first to tell you that success -- true, lasting success -- is years of hard work away, even when it appears to have already arrived. He is quick to point out the low-man-on-the-totem-pole position he occupies and embraces on his new team. He'll tell you how he wasn't particularly successful in the junior ranks. But don't be fooled.

Fresh off his first-ever Paris-Roubaix attempt when we spoke last week by phone, the tall Belgian from Wortegem-Petegem, a town near Oudenaarde which last hosted the Ronde van Vlaanderen... three weeks ago, sounded pretty unfazed by his glittering 20th placing, a result made all the more impressive considering he was working for his teammates, not himself. "All the riders were saying before the race that I would need a whole week (to recover) because everything would hurt so much, but I don’t know, it doesn’t hurt much more than after a normal race, just a little bit."

Pretty amazing, except when you look closer -- well, it's still amazing, but it also makes sense....

The convo continues... on the flip!

Vanmarcke is the youngest of five sons in a truly Flemish cycling family. "I grew up with racing, I never saw anything else. My dad used to race for some smaller federations." Young Sep, age six when his brothers started racing, had to wait nine years for his chance. "I couldn’t start earlier because of my parents; there were three children that were racing and it was too difficult to get them to the races at one time. I just had to wait til I was 15."

But what Vanmarcke took away from this was passion and patience, the latter something which has served Vanmarcke very well. "It was good to wait. Some parents give you pressure but it’s better to wait long enough. "When I started I wasn’t good, then as a junior I could sometimes win or get top ten in the big races. When I was under 23 I could win those big races and always be in the front. Now as a pro I’ve been good pretty fast. So each year I’ve become better."

The world started taking notice not just this past month but a year ago, when Vanmarcke capped off a strong pro debut classics campaign for his Topsport Vlaanderen team with a second place at Gent-Wevelgem, best of the semi-classics. In the weeks leading up to Flanders, he scored a third at the Ronde van het Groene Hart in Holland, between Nico Eeckhout and Graeme Brown, then finished Dwars door Vlaanderen in the main chase group behind winner Matti Breschel, placing between Fabian Cancellara and Tom Boonen in the top 20. He knew he was on form. 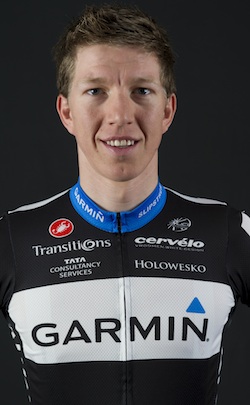 Then came the Gent-Wevelgem dash that changed it all. After riding at the front for much of the final hour, Sep capped off his breakout day by outsprinting legend Philippe Gilbert and giving winner Bernhard Eisel a run for his money. Impressive enough even before you recall that with 2km to go Vanmarcke launched a solo attack against the elite front group, pushing for the solo win, only to suffer cramps and rejoin them for the sprint. The guy with cramps, fresh off an attack, nearly wins the race. Sometimes unfamiliar names climb up on podiums but aren't much heard from again, but this sort of performance was no fluke.

People noticed. "I didn’t know what had happened, all the media came to me, I’d never had that happen. Suddenly everybody knew me. Definitely the confidence grows very fast. When it’s your first year in a smaller team, very few riders know you and respect you. When suddenly big riders start to talk to you, they respect you more, it’s a huge difference between before Gent-Wevelgem and after."

He hired a manager and teams began calling. But the transition to the Pro Tour was smoother than you might expect. "I just talked to my manager, and he said to me, which team would you most like to ride in, and I don’t know why but I wanted to be at Garmin. I think it’s a really big team, where I could learn a lot, get better. There are many young riders who can develop without much pressure, that’s really good. So I was really lucky that Garmin were interested in me. The perfect team for me was also interested in me, so it was easy to decide."

By June the decision was made; in July prior to the Tour de France start Sep met with Garmin-Cervélo boss Jonathan Vaughters to confirm the deal, which was officially signed in September. The classics hope from East Flanders was off to an American team. Ever unfazed, Sep: " I like [being on a foreign team] actually very much. I was maybe healthy-afraid,* I’ve always been in Belgian teams before, last year was my first pro year and a Flemish team, then suddenly I’m on a really huge American team, only Johan Van Summeren is Belgian, so it was a big difference. But I really liked it from the first training camp."

[*English isn't his native tongue but this is a pretty perfect description.]

What's not to like? Vaughters hired his boyhood idol Peter Van Petegem to tutor the team in tactics, the team put him on the classics squad with the World Champion and some other extremely accomplished riders, and "they always say to me 'no stress.' Because I want to be good and I give myself so much stress that they always say take it easy, you have time. They do the opposite of what I do to myself. They want me to take it easy because I have a lot of years and they want me to grow easy so I am strong in 4-5 years."

2015 is a long ways off, especially for a guy who just unleashed a few pretty glittering performances, particularly in the E3 Prijs Vlaanderen. Anyone interested in him before that day probably got a bit excited when he rocketed up the Paterberg and dropped the lead group he'd been functioning in for all of the Vlaamse Ardennen climbs.

Vanmarcke, though, wasn't relishing the moment. "There were still 43 km to go, it’s a long way. You never know and you think about it a second, but I knew a group was coming with Heinrich and Roelandts, they were only about 40 seconds, so I knew they were coming back, I just wanted to survive all the hills, then I knew I could make it to the finish line with all of them." He did -- or at least, he stayed with all but one (Cancellara) of the leaders who caught him at 17km to go -- and outsprinted most of them for fourth.

More impressive was his performance in France. Racing over the cobbles of Paris-Roubaix for the first time at any level in his career, Vanmarcke finished 20th after another hard day in service of Garmin-Cervélo's triumphant performance. While he's as drawn to the Ronde van Vlaanderen as anyone of his pedigree would be, you can almost hear the lightbulb going on about Paris-Roubaix.

"[Compared to the cobbles of Flanders] it's the same, and totally different. 90 percent the same riders in the front, but you don’t need the acceleration. You really need to love the cobblestones to be good at Paris-Roubaix. In Flanders if you’re a good rider you can go far, but at Paris-Roubaix it’s all about the cobbles. You have to really love it."

So do you really love it?

"Yeah yeah yeah, really! Before I was always thinking about the Tour of Flanders for the future, but now I’ve got the two races. I really loved it. Flanders is in my own country, I get a lot of attention from the media. Maybe in a few years I will be a favorite. [But] I think it’s easier for me to be fast and good at Paris-Roubaix. The Tour of Flanders for me is more difficult because you need to fight a lot more for a spot in the front. In Paris-Roubaix, if you are in the front on one cobblestone section, then you’re in the front on the next one too and the next one."

Sounds easy, but only the strongest riders take to the front of the race or the first set of chasers for secteur-after-secteur and without wilting.

From there Vanmarcke rode Brabantse Pijl with no impact, then headed for a brief rest before things get busy again: "After this I go to Tour of Turkey (this weekend), then in May I’ve got some rest and there’s only Picardie for me. Then in June Delta Tour, and Ster Elektrotoer, then getting ready for the national championships." A possible appearance in the Vuelta may be in the offing, but the team is in no hurry to rush him into the grand tour world, for fear that he may get overcooked.

Taking it slow. You sometimes think of ambitious riders wanting to chase everything right out of the gate, but with Vanmarcke his ambition comes in a more refined package -- the desire to be great even if he has to wait a while. "Yeah, I think it’s important, don’t do too much, don’t push too much at once. I know myself now very well, and when you always want it at once, you will get burnt out. I know many Belgian riders who when we were young I couldn’t follow them. They were way too good for me. And now they didn’t make it to the pro level, or they did make it and they’re not really good. I think when you take it easy and don’t want too much at once, that’s pretty important."

My kicker question -- what does it feel like to be a Flemish cycling star who excels in the races he grew up watching? I mean, just because you're Flemish doesn't mean you have the qualities for this particular set of races; Flanders produces its share of pure climbers too. For Vanmarcke, the boyhood dream is reality, right?

"I think the kind of rider you dream to be is what’s in you. I think I always dreamed of the cobblestone races and always wanted to do it, so I’m good at it. There are other riders who always dreamed of the Tour de France, so I think the thing that you are good in is what you always dream about. For example I didn’t dream about Miguel Indurain, but I loved Johan Museeuw and Peter Van Petegem and Edwig Van Hooydonck. Maybe also because it was in my neighborhood, all those races. I’m lucky that those races are perfect for me."

Or you're really good at making your own luck, Sep.