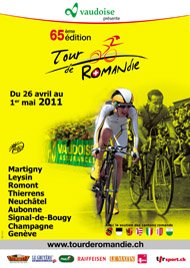 OK, Philippe Gilbert wins the first part of the season.  But while Chris mourns the end of the spring classics, I rejoice.  It’s time for some Alpine stage racing!

The 6 day Tour de Romandie starts this Tuesday.  And, as usual, it’s an interesting course

Alejandro Valverde  - oops!  - Simon Spilak will be back to defend his 2010 title. Recall, a month or so after Valverde won the 2010 Tour de Romandie, he was suspended and his results stripped back to the start of 2010.

Most teams are fielding very strong line-ups.  Some of the favorites include 2009 winner Roman Kreuziger, Ivan Basso, Cadel Evans, and Denis Menchov.  This preview will focus on the course, but please feel free to use the thread for some VDS smack talk.

The Tour de Romandie has been raced since 1947.  Romandie refers to the French speaking region of Switzerland - approximately 20% of the population  - in the western edge of the country.

Official Race Site:  here
Official list of teams and riders here   (may not be completely up-to-date)
For the stalkers in the crowd:  Team Hotels here

TV Broadcast Schedule here:  Eurosport will be televising and I am sure as always that steephill.tv will provide other viewing options.

This short course is completely flat.  Some sharp turns - and helicopter shots of the surrounding mountains - will be the main excitement.

For the Tourists?:  The Roman-Gallo town of Martigny is a well traveled exit from the Alps - 43 (bike-able) kms below the Great Saint Bernard pass.

The course will pass near a small, well preserved Roman Amphitheatre - which is directly beside the Musée & Chiens du St-Bernard (a dog Museum).

If your looking for beautiful alps views, this is the stage.

The finish is at Leysin, a small ski station in the Vaudoise Alps.  It's slogan:  The Oxygen of the Alps. 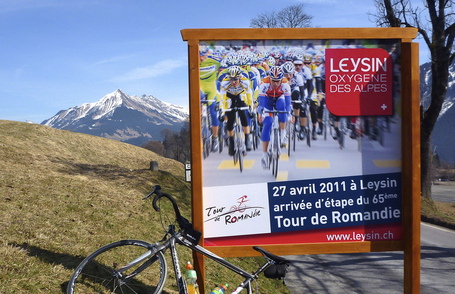 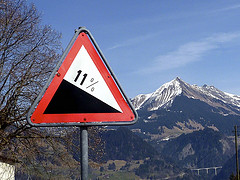 It’s a strange mountain stage, and not exactly high Alps.

After a flat first third, the majority of the rest of the course is just slightly uphill.  Fortunately, there are a few steep stretches, especially the last 5 kilometres to the finish in Leysin (with an 11% stretch).

The second last climb - Col du Pillon - is the high point of the week.  While not too high at 1546 metres - it is in the shadows of high mountains and glacier skiing above 3000 metres.

PdC’er "thebongolian" and I cycled this pass as part of the 2010 Gruyère Cycling Tour. 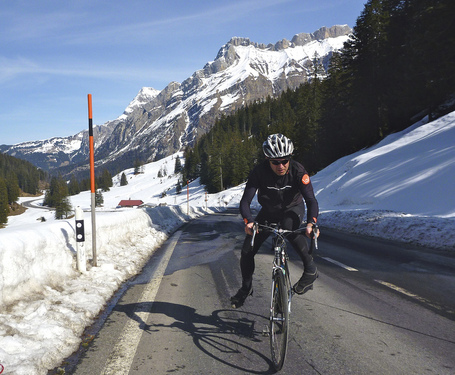 For the Tourists?:  A bit of everything along the route:  UCI headquarters in Aigle for the bureaucrats, Nestlé headquarters in Vevey for the chocolate lovers, historic Gruyère for the cheese-heads, and Roman Polanski’s Gstaad hide-away for the …… films buffs?

Gavia would never forgive me if I passed up a chance to show the cycling cheeze guy: 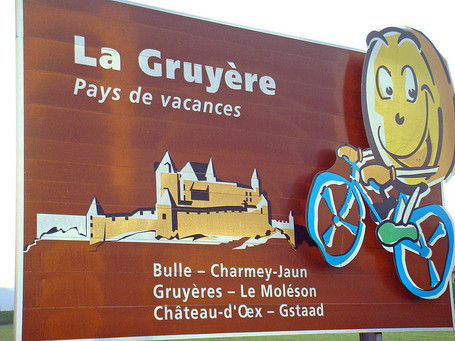 This stage, is on the "plain" between the Jura mountains and the Alps.  But Switzerland is rarely flat.   It’s going to be up and down all day.  A very challenging stage with almost 2000 metres in climbing spread over countless little hills.

This stage is brilliantly designed for the fans.  Three separate/unique loops all starting and ending in Romont.  So fans can see the start, the finish, as well as two intermediate pass throughs.

For the Tourists?:  Romont is a beautiful, perched, walled village dating back to the 10th century.  The castle is home to the Swiss Stained Glass Museum. The gothic church has stained glass windows from as far back as the 15th century.

A small hill to start, then fairly flat riding until a category 1, and a category 2 climb in the hills above Neuchatel before a flat 14 kilometres to the finish.

For the Tourists?   Expect lots of shots of Lake Neuchatel.  The course passes the lovely walled village of Morat.  Me? I'd go cliff hiking in the Juras above Neuchatel.

Short, but with 350 metres of climb , this is a testing time trial.  The climbing is mainly front-loaded, but the last kilometre is about 3%.

For the Tourists? Halfway along the course is the town of Bière.  Enough said.

The final stage features two beautiful Jura mountain climbs:  Col du Mollendruz and Col du Marchairuz.  Sadly it's the short (but steep) side of Marchairuz and its summit is 60 kilometres from the finish.

In 2009, the final stage of Romandie finished almost identically:  summitting Marchairuz and then racing to Geneva.  Oscar Freire nipped Tylar Farrar to win that stage.  So it looks likely to be a sprinters day.

For the Tourists?  Come have a beer with me at the top of Col du Marchairuz. 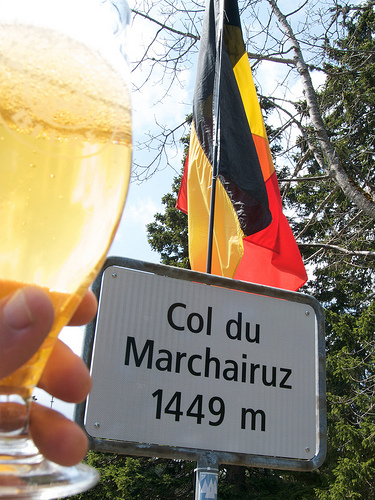 Cheers and enjoy the race.