We're heading into the meat of the domestic road racing season in the United States with the two NRC races, the SRAM Tour of the Gila and Joe Martin Stage Race leading into the UCI race, the Amgen Tour of California and US Pro National Championships. For those that do not know, the NRC is USA Cycling's National Racing Calendar, a 30-event calendar where points are accrued for both men's and women's teams. Unfortunately, no prize money, no jersey, no other recognition than press releases for the leaders but it's still an important goal for many of the US Continental teams – but not all.

The racing this year should be interesting with multi-year NRC overall winner UnitedHealthcare moving up with Pro Continental level and with (Fly) V Australia losing some of their GC talent. Many have talked about the sometimes negative racing that sometimes happens in the US but I think, or hope, that this year will be different with the team changes.

Read on for my take on the racing so far - the men's side this time.

While we've only had one national level stage race (aka NRC) with the Redlands Bicycle Classic there has been some interesting racing at some of the other regional races. Redlands was a duel between RealCyclist's Francisco Mancebo and BISSELL's Ben Jacques-Maynes with Mancebo winning by 1 second on the final sprint for time bonuses on the final stage. 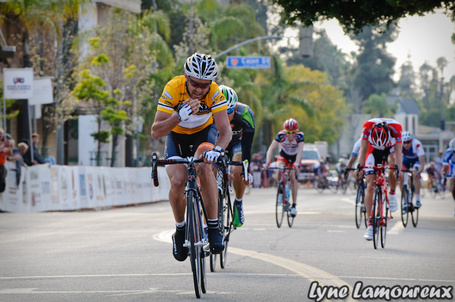 Let's start with the team leading both the Individual and Team Classification, RealCyclist.com. The team is a continuation of On the Rivet Team which split from the Bahati Foundation last year. Along with a new sponsor, they brought in new riders and Gord Fraser, one of if not the winningest male racer in North America, as the DS. Mancebo is the go-to guy on the team with climber and good TT'er Cesar Grajales providing the 1-2 punch. I expect Mancebo to continue to race well but the unknown is if their young and somewhat inexperienced team can defend the yellow in future races. Mancebo is the favorite going into Gila.

BISSELL has been around for many years and brought most of the core riders back which include some of the best time-trialists in the US scene with Ben Jacques-Maynes and his brother Andy who was faster this year, Jeremy Vennell and Paul Mach. I've noticed two things with the team this year, one is that they seem to be having a lot more fun and second their aggressive racing style. At Redlands, they put it all on the line to try and win GC, as opposed to playing it safe. It didn't work but it led to good racing. They just added a re-juvenated Chris Baldwin to the team. Baldwin was on the roster of the Pegasus team that imploded late last year and started off this season with an amateur team. He turned heads with his great form and attitude of just having fun at Redlands. Baldwin won Gila in 2006.

One team that has surprised the heck out of me is Team Exergy. A new Continental team this year, two of their riders, Andres Diaz and Carlos Alzate, forced us all to do quick google search. Both Colombians, the two riders are very different. TT'er Diaz is their GC guy who admitted to still work on his climbing while Alzate is a sprinter. Matt Cooke has also been TT'ing and climbing quite well in the early races and I expect him to go for KOM points at many races. Another team to watch and see if they can sustain throughout the year.

Kenda/5-Hour Energy had a major change in their roster this year with their expanded goal of competing at the national level. Hired in January after the Pegasus fiasco, GC man Ben Day won the San Dimas Stage Race which is held a week before Redlands. With the fiasco this winter, Day didn't train as much as previous years and wasn't able to sustain his form at Redlands but you can be sure that he'll come back out swinging. Many on his team are also new to defending the leader's jersey which could be seen at one San Dimas stage but the next day, they had it down.

Another stalwart on the US scene is Jamis/Sutter Home. Luis Amaran has been their man GC guy and continues to be, he can TT, he can get into dangerous breaks and when needed he can pull the leadout train. The team also has some of the fastest sprinters with the brothers Alejandro and Anibal Borrajo. Climber Tyler Wren showed really good form  this year so far and the Wren-Amaran combo could be very dangerous as Gila.

Kelly Benefit Strategies-OptimHealth is one of the teams that does not focus on the NRC standings. They also split their squad to race internationally with a team racing currently at the Tour de Bretagne. In my opinion, their travel have hurt them at Redlands with most of the riders coming from Tour of Thailand and not able to contest the wins. If Andy Bajadali is healthy – he battled a knew problem all last year – then he is one to watch at Gila along with Jason Donald. Guest-riding for them is Eric Wohlberg aka Wohlberginator, who won the overall in 2000.

The two U23 teams Chipotle Development Team and Trek-Livestrong U23 are also fielding squads at Gila. Trek-Livestrong had a very strong race last year with both Jesse Sergent and Taylor Phinney winning stages. Neither are here or racing for the team so we'll have to see what they can do.

A few other teams or riders racing at Gila need to be watched. The Kiwi Continental team PureBlack Racing were quite aggressive at Redlands and they've been training at Big Bear. They are looking to leave their mark. And then there's John Bennett of CalGiant, the only question about this 20-year old is not will he go pro but which team? He's smart and very dangerous in breaks. Ace TT'er Tom Zirbel is returning to NRC racing at Gila guest-riding with the amateur team Hotel San Jose, his form of course is completely unknown.

Phew - how's that for a brain dump? I'll be coming back on a regular basis to give you an update on the domestic racing. The 5-day SRAM Tour of the Gila starts tomorrow and had some of the toughest climbing and descending in the US, at altitude. And high wind is predicted for some of the days. It should be some good racing.