Share All sharing options for: GP Elsy Jacobs and the Luxembourg Races

I'm not sure how official this is, but for me, the women's cycling Classics season starts at the end of March with the Trofeo Alfredo Binda and ends with the Festival Luxembourgeois du Cyclisme Féminin.

Luxembourg! Well known for castles, tax havens, and in the cycling world, more top-flight riders than you'd expect from such a small country. These days we have the Brothers Schleck, but this weekend celebrates some of the superstars who went before them.

Elsy Jacobs was Road World Champion in 1958, and held the hour record from 1958 to 1972. After her death in 1998, a mass participation ride, the Randonnée Elsy Jacobs was set up in her name, and then in 2008, the elite race, GP Elsy Jacobs was added. It's been UCI ranked since 2009, and consistently attracts a really high quality field. Last year a second race was added - last year it was UCI 1.2 and called GP Mameranus, this year it's 1.1 and been renamed GP Nicolas Frantz, after the two-times Tour de France winner from Mamer (he won the race in 1927 and 1928, and took 20 TdF stage wins between 1926 and 1929) and this year we're getting a third race - a Team Time Trial, one of only two that is raced on the women's calendar.

So castles, scenery, hills, and apparently one of the best race set-ups out there! Here's a video of last year's race - and below the jump, information about the other races and who'll be there. 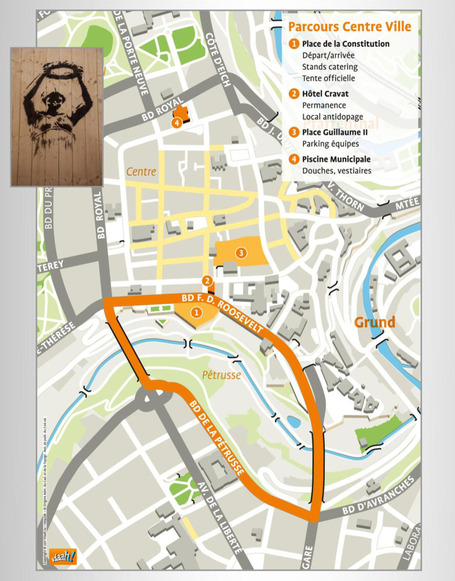 The Team Time Trial takes place in the historic old town of Luxembourg. It's only 5.1 km, three laps of a 1.7km circuit, starting in the Place de la Constituion, heading out over one of the symbols of Luxembourg's independence, the Adolpe Bridge, along the Boulevard de la Pétrusse, over the Passerelle Bridge and past the Notre Dame Cathedral, back to la Place. It should be very dramatic - the bridges are both over a hundred years ago, and span a deep river gorge.

The Team Time Trial starts at 20:00, and is due to end after 22:00 CEST. Two teams will start every ten minutes, so there shouldn't be problems with too many teams on the lap at the same time - you can see the order they'll go in the race page.

There's not much to compare to, but the nearest equivalent is the World Cup Vårgårda Team Time Trials. For the three years it has been raced, Cervélo dominated, with HTC in second place, but Garmin-Cervélo is a very different team, with the reduction in numbers meaning they're unlikely to be as strong - and if anything, HTC-Highroad is even stronger this year - as is Nederland Bloeit, who were third last year at Vårgårda. The surprise there was Leontien.nl, who were only 3 seconds behind the Bloesems - and their team is stronger this year too. Kirsten Wild, who's probably the best rider out there at the short ITTs, and was a mainstay of Cervélo, isn't on the startlist - neither is current Dutch TT Champion, Marianne Vos, for NB, but it was obviously put together a few weeks ago, and is a little out of date. If Wild is there, I'd definitely put my money on AA Drink-Leontien.nl turning up on the podium, and NB as well, but I don't really have anything to compare to, so I'll take the easy option and bet on HTC-Highroad winning, but who knows? It's such a short TTT that teams with track riders should have an advantage - any suggestions any of you have, please add to the comments

It's something new on the calendar, it should be exciting - and a question for central Europeans - what time is it getting dark out there? Will the later teams be riding after dark? Fun! 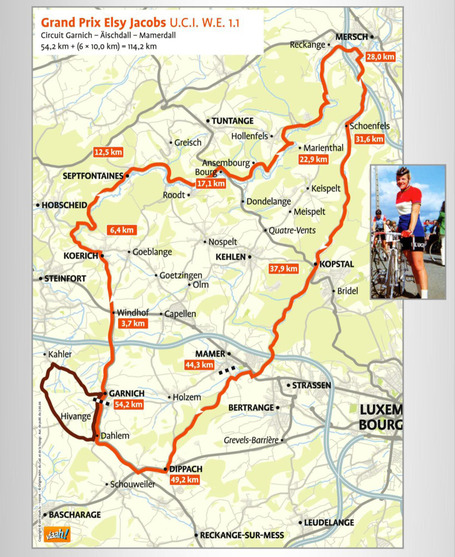 There seem to have been different ways to win this race in its three-year history - with a theme of breakaway. It starts and finishes in Garnich, and is one 54km lap and then 6 laps of a 10km circuit - 114km in total. The biggest climb is on the approach to Garnich, and then there are two short, sharp climbs on the lap, ending on an uphill. More info on the race page. 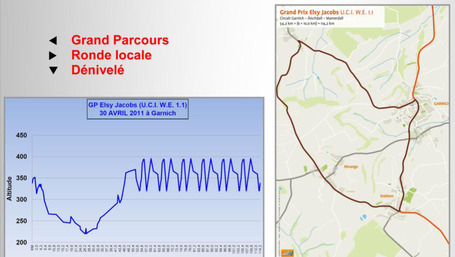 Last year Emma Pooley won it from, surprise! an escape on the penultimate climb, with 20 km to go, in a race full of attacks - with Monia Baccaille (who won the first race, in 2008, when Marina Romoli came third) beating Andrea Bosman for the sprint for second, out of a group of 18 who finished 1:21 behind Pooley - the next group finishing over five minutes behind the winner. In 2009, it was a break of three riders - Svetlana Bubnenkova beating Grace Verbeke and Iris Slappendel, with a group of six 18 seconds behind, and the next group at over two minutes. So it's all about riders knowing when to attack - and watching everyone else around them with the same idea! 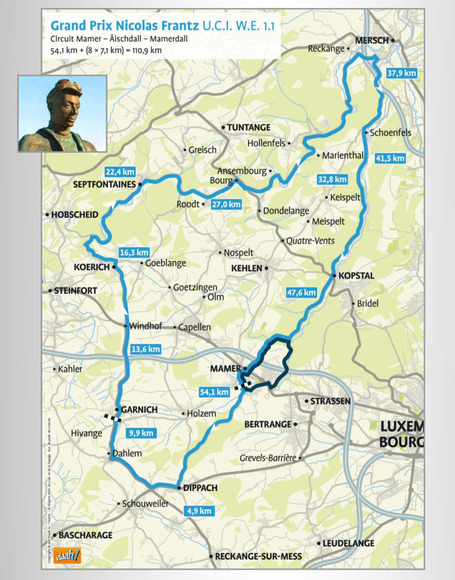 Looking at the map, you might notice it's a very similar route indeed - in fact it's exactly the same first big lap, but this time starting and finishing in Mamer, the home of Nicolas Frantz, and followed by 8 laps of 7.3km circuit, making it 110.9km in total. Again, the little lap has a climb up to Mamer, which they repeat on every lap, ending in a short-sharp descent. Race page here. 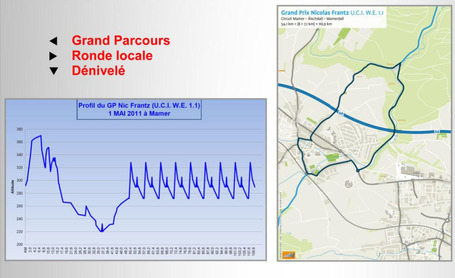 It's only been raced once - when it was won by Emma Johansson, who finished six seconds ahead of Evie Stevens, with a few riders coming in one by one, and then a large group of about 25 coming in 42 seconds later.

It's races for the Classics riders, and with the weather forecast predicting rain for the weekend (thunder on Saturday! Yikes!) it sounds like it'll be the tough riders who'll do well. It's a shame Emma Pooley isn't there to defend her title, as she's still out with a broken collarbone - and here's hoping Grace Verbeke and Iris Slappendel are untroubled by their hand injuries - but there is plenty of Classics talent on the startlist - I'm sure Monia Baccaille would love a second win, but this is the last chance for 2011 Classics glory, so it's a good bet that the races will be hard-fought. The nice thing about that startlist? The fact they seem to have pulled in a whole range of different businesses to act as additional sponsors for each of the teams - but then, you'd expect race organisers in Luxembourg to be good at money!

The race pages also tell us all about which live bands will be playing at the start/finish of each race - sounds like jazz! And last year there was at least one Schleck in the finish-line crowds, so plenty of things to look for, while waiting for the race to end!

For VDS fans, the TTT isn't in the competition, but the two road races are VDS 4 - so scoring down to 15 places...

I don't think there'll be any tv coverage, and Manel Lacambra is over in the USA with the other half of Diadora-Pasta Zara - but Anton Vos will be out there, and he's always good for tweeting results - and I'm going out there with the Horizon team for some racing fun, so phone signals permitting, I'll tweet whatever in-race updates I can find - wish me luck!

A random question that came up in the course of looking things up for this article. Another Luxembourg cyclist who's won stages of the TdF is Jean Majerus, who won stages in 1937 and 1938 - his brother Jacques was also a pro cyclist, but are they related to current Luxembourg Road, TT and CX Champion Christine Majerus? I always feel stupid asking things like that, in case it's a common name like "Smith" is in the UK, but still.... And if anyone has more information about Elsy Jacobs - or anything about these races, please do add to the comments - the more, the merrier!