You may have noticed I'm a bit of a fan of women's cycling, so you can imagine I jumped at the chance when Horizon Fitness team invited me to come out to Luxembourg with them for three days racing. It's the weekend of the Festival Luxembourgeois du Cyclisme Féminin - and tonight was the first race, the City Trophy Elsy Jacobs.

The race started at 8pm, and once it got dark, the teams were riding under streetlights only. Teams were maximum of 6, scoring was on the first three riders only.... and it rained halfway through the race.... but more on all of that below! 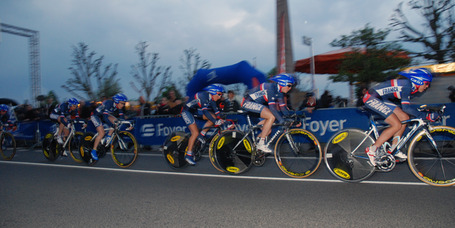 The teams started arriving from around 5pm - there was a big square in the City set aside for them, and it gradually filled up with a range of vehicles - from Nederland Bloeit's huge truck and motorhome to cars and transit vans. There were big traffic problems coming into Luxembourg from Belgian, so some teams had more time to prepare than others - and with the last teams setting off at 10pm, they didn't all want to hang around too long.

I got to take some photos inside the very impressive & lovely AA Drink-Leontien.nl bike truck (left) & Team Australia's: 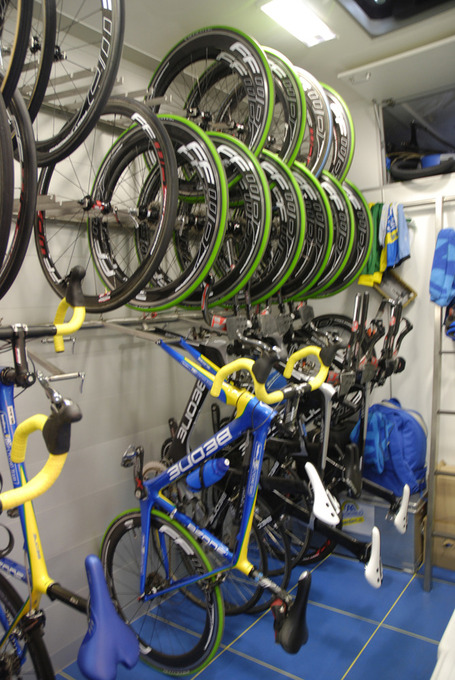 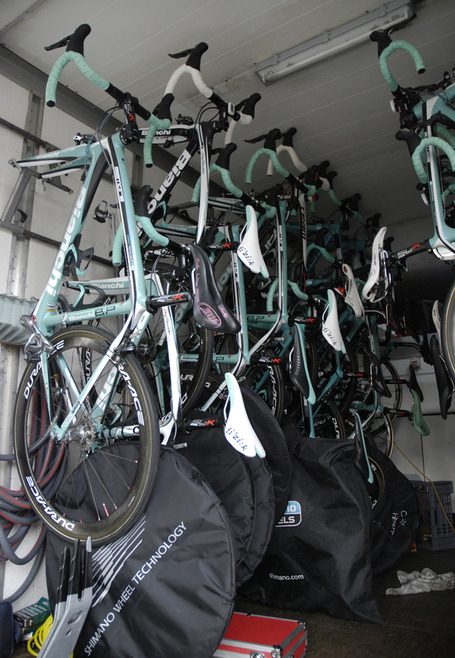 Garmin-Cervélo's was more compact than those two behemoths (it's a very classy bus indeed, I don't do it justice here): 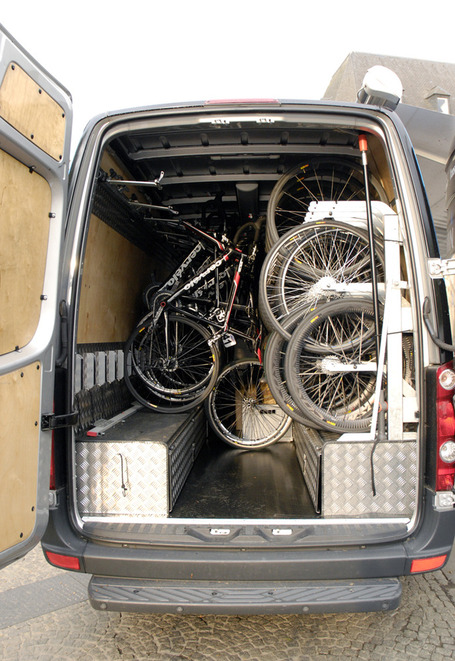 and some teams, well...... Here are Horizon getting ready for their first huge weekend - GP Stad Roeselare was their first ever UCI 1.1-rated race. They had a great team for it - Nancy Arreola, Dani King, Jo Rowsell, Annie Simpson, Claire Thomas and Helen Wyman.... Rowsell & King both being World Champions in team pursuit on the track... TP is 3km, and the course was only 5.1km, so perfect distance for them! 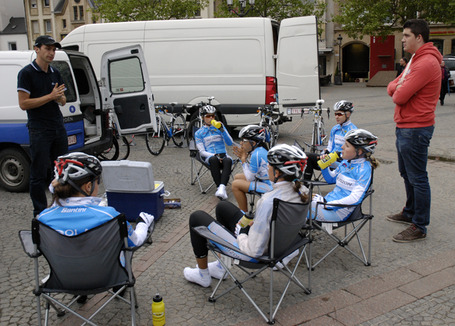 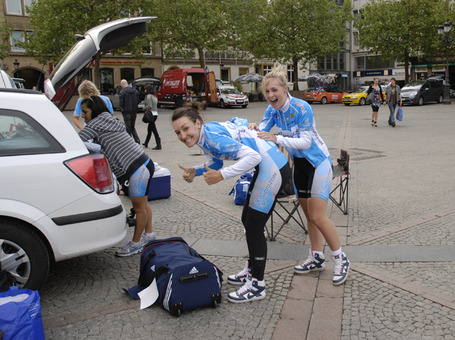 The race started in the daylight and the dry - but it did rain in the middle of the race - and of course it got dark halfway through. Horizon had the fastest time, at 7.14, but were soon beaten by Team France, and then again by Team Australia, who, with 7:01, had to sit in the Romers results van for a long, long time 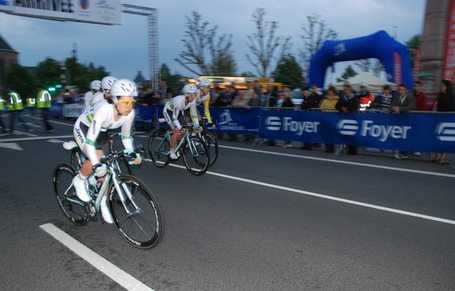 Throughout the race there was Europop on one side (I heard Dos Cervezas Por Favor and thought of Albertina and tgsgirl) and a lovely little jazz band on the other, who played all night, despite the rain 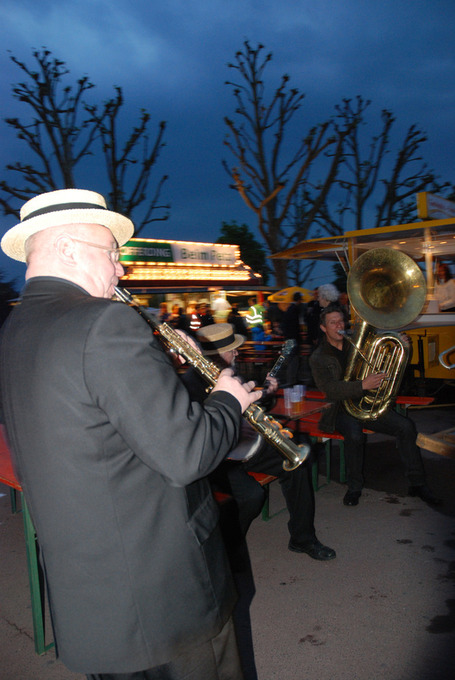 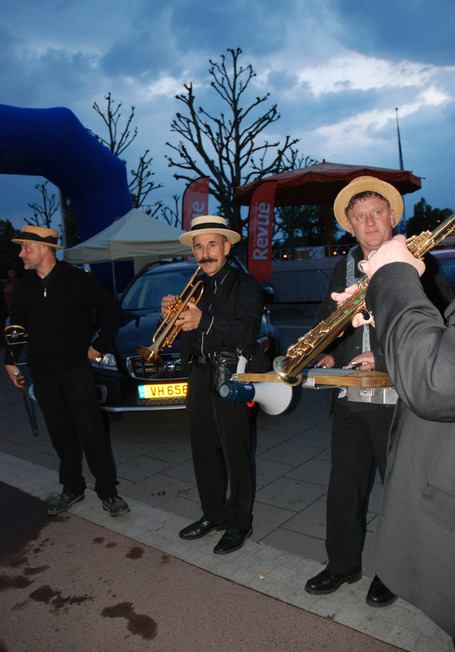 Lointek and Dolmans had a particularly rainy race - but that's the thing about Time Trials, the weather can't be controlled (you can see who started when as part of the race information) 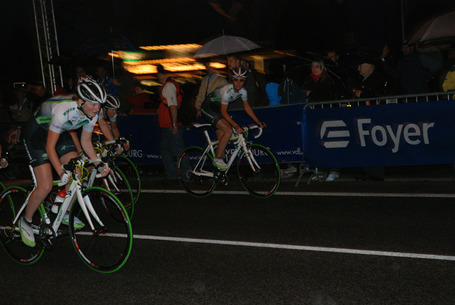 It was so strange being so close to the riders, and watching them interact as teams. TopGirls were laughing so much on the startline, that I thought they might miss the start - and MCipollini-Giambenini were joking & having fun while they waited for their turn: 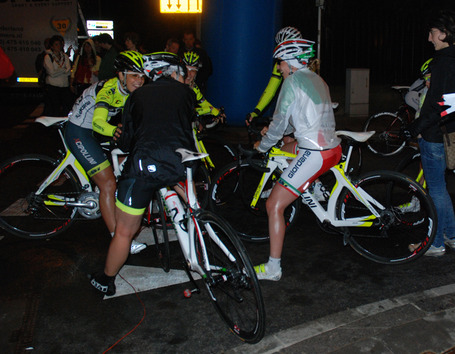 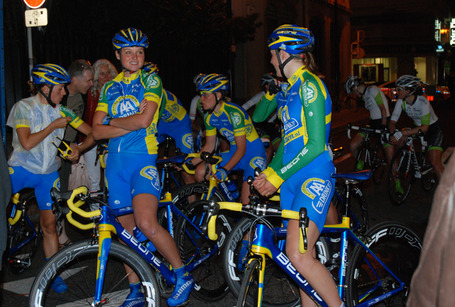 The riders signed on actually on the course - I think this is Annemiek van Vleuten? It's definitely Marianne Vos! 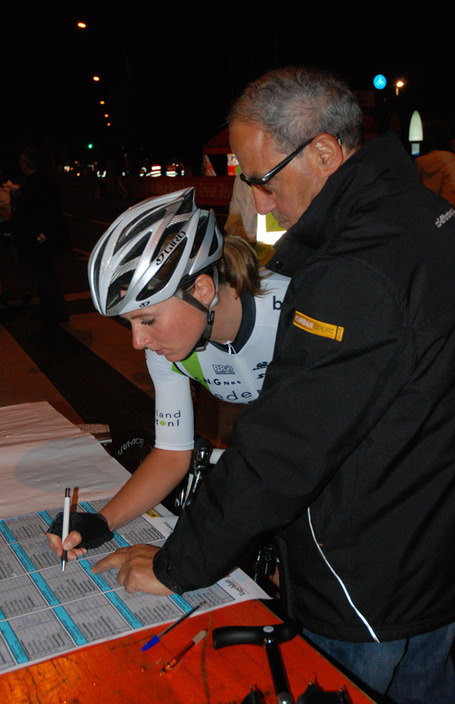 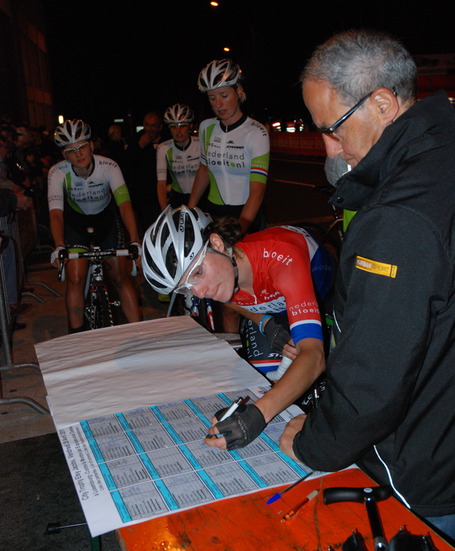 Team Australia had stayed in the top spot, with France second and Horizon third, for most of the night. By the time the final three teams hit the course, we were beginning to think it might stay that way..... AA Drink's time was announced at 7:26, but later they were shown to be above Horizon... and then Nederland Bloeit clocked in at 7:10, moving into 2nd place..... but it was time for the team everyone had been waiting for.... Starting last, HTC-Highroad! 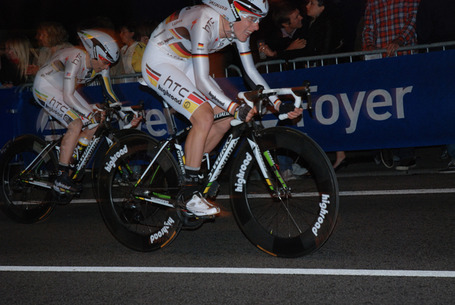 Their time: 6:58, giving them the win! Team Australia finished second, with Nederland Bloeit in third. There wasn't a podium - instead we all followed HTC into a tent for their presentation - here's the victorious team: Amanda Miller, Evelyn Stevens, Charlotte Becker, Judith Arndt, Amber Neben and Emilia Fahlin. 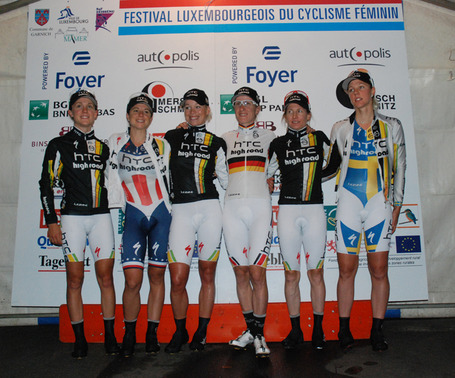 They were very patient while a million photos were taken - apart from a final lap, they hadn't even had a chance to warm down - and they were faced by this! 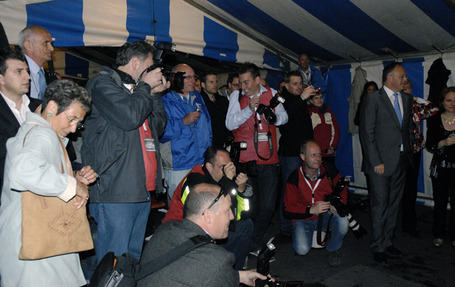 The tent was full of people - even though most of them couldn't see - but everyone took a step back when the champagne bottle was passed to Amber Neben - there was something about that look in her eye...! 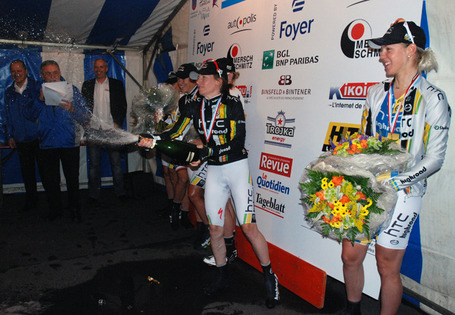 So the first TTT of the year showed HTC-Highroad as dominant - they rode a fantastic race, but will their form last all weekend? Tomorrow it's the GP Elsy Jacobs, and Sunday, the GP Nicolas Frantz - we'll have to wait and see!