Tales from the Corner Cafe

Share All sharing options for: Tales from the Corner Cafe 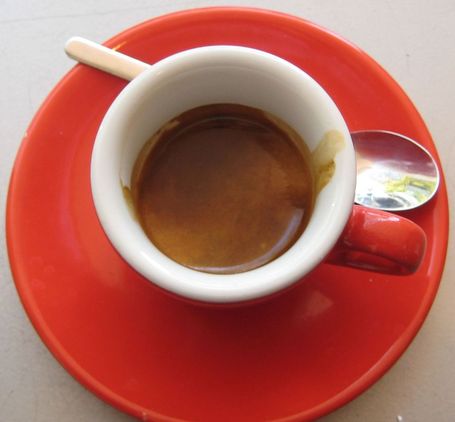 Like any relationship, your relationship with your favorite coffee shop is a delicate thing with distinct phases. You start out relatively anonymous. Then, the barista knows your order. Next, she knows your name, and at last, so does everyone else. For a writer, the anonymous stage has distinct advantages. You walk in, get an espresso, find a table, type madly. No one really notices. It’s all so productive.

My local Cafe and I have travelled well beyond the anonymous stage. A few days ago, for example, I sat down with an espresso, my inbox, and a magazine. I looked up to find one of the other regulars sitting at my table. He wanted to talk bikes. He was thinking about buying a Bianchi single-speed cross bike. We bantered about bikes and joked about blood doping. It was just like an internet forum, except in real life. And there was daylight. Not only am I regular, but they all know what I do. Maybe I need to bring a mask or a paper bag.

Sometimes I invite people to meet me at my local Cafe. Last year, Ted King joined me for a latte. He drinks his latte nonfat with a single cube of sugar. A few weeks ago, I met pro mountain bike racer Erica Zaveta. She also likes a good latte. Zaveta, a junior at Lees-McCrae College who rides for the BMC Mountain Bike Development Team, drank her latte without the sugar.

It’s funny how easy it is to pick a bike racer out of a crowd. I recognized Zaveta immediately, though I’d only previously seen a race-day photo of her in full kit and helmet. We talked about bikes and racing. She does not have a single-speed cross bike, but she does have a knack for winning bike races. Last year, she won the collegiate mountain bike national championship at North Star in Tahoe. This year, she is riding her first elite season with BMC here in the United States and traveling to the Pan-American Games and a few World Cup races with the USA Cycling Development team.

Zaveta started racing road at fifteen. She is from Pennsylvania and worked at a local shop. For a long time, she did not race mountain bikes. "I wanted to keep it low-key," she said. Mountain bikes were all about the fun, road was for the serious business of racing. Racing for composite teams, Zaveta rode some of the big races here in the United States like Cascade Classic and Tour of Gila. Her favorite result from the road came at the 2009 Cascade Classic where she wore the Young Rider’s jersey. "Composite teams are really hard," she commented of her experience guest-riding. The riders show up with very different fitness levels and ambitions, and it can be difficult to organize team tactics. "I would love to go back to road some time and try it with a real team," she said.

For now, Zaveta is hitting the dirt full-time. "I want to see where mountain biking takes me," she explained. The deal with BMC came as a complete surprise. Zaveta said she was in the car with friends on the way to a race when her phone rang. Hi, this is BMC, we’d like to offer you a contract? Cue freak-out moment.

When I met her a few weeks ago, Zaveta was still psyching on her new team set-up. "Oh man, I’ve never been on a real team before! There’s a little sticker on my bike with my name on it!" she laughed. "I was totally freaking out," she said of her first race with BMC at Bonelli Park in San Dimas, California. "You finish your race and just hand off your bike to the mechanic," she said wonderingly. Zaveta admitted that she was rather famous among her friends for messy bikes. Her friends once hung her dirty bike in a tree to heckle her into washing it. "Everyone’s helping me, it’s super motivating," Zaveta commented of her new team. "It’s good energy."

In her years as a cyclist, Zaveta has raced road, track, mountain bike, and cross. "I didn’t like track," she admitted. She does like cyclocross, but "it’s a hard time of year to have good fitness." Road and mountain bike battle for her affections. She likes the tactics on the road, but the atmosphere in mountain biking appeals to her. At the start of the XC race at Bonelli, "Georgia Gould was dancing on the start line," recounted Zaveta. Bonelli was her first race on her new hard-tail BMC bike, which she described as "super light." Zaveta said the results were not great, but she considers this season to be "a learning year."

After racing at Bonelli, Zaveta headed to the Pan-American Games for the USA Cycling Development team. She will also ride three World Cups with the national team in pursuit of experience and possible UCI points. In a pre-Olympic year, the UCI points are especially important, because they determine how many riders the U.S. can send to the cross-country race in London. "I look at my inbox and there’s an itinerary," said Zaveta. She called her new cycling life "super intimidating," but also very "motivating."

Her inbox also includes messages from her professors back at Lees-McCrae College in North Carolina. Zaveta is still a student there and is working to finish her junior year. Cycling represents part of her motivation for keeping up her coursework. "I love collegiate racing. It’s like a family," she said. The atmosphere is fun and everyone is "whole-heartedly excited for each other." Zaveta will hope to defend her national title in October. She also raced cross-country running this year at Lees-McCrae as a break from bike racing. "It was hard," she laughed. Running is hard. She felt she had become "too focused on cycling" and "too stressed out." The running offered a release. Zaveta also does yoga and weight training during the off-season. "I’m glad I stayed in school," she concluded.

By now the coffee sinks low in the cups and only the last bubbles of foam remain. It’s time to pass the table along to someone else. I wish Zaveta luck with all her adventures. At age 21, she already has five years of racing in her legs. Where will she be five years from now? Maybe in the dirt, maybe on the road, but I’d guess she will be pedaling somewhere. Me, I’m just sitting here sipping my espresso and wondering who will sit down next at my table.