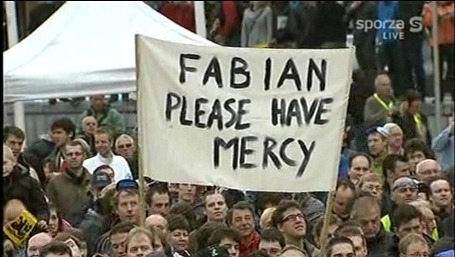 Saxo Bank's Nick Nuyens completed the resurrection of his career today with an incredible, improbable win in the Ronde van Vlaanderen, outsprinting Sylvain Chavanel of Quick Step and a suddenly mortal Fabian Cancellara. Cancellara took off on the Leberg, over 40km from the finish, and it all looked like a rerun of the same film we've seen enough times, but coming into Geraardsbergen Cancellara cracked and was caught by the peloton at the base of the Muur. The Muur and the Bosberg splintered the group, and a late Cancellara attack winnowed it down to him, Nuyens and Chavanel, with Tom Boonen just chasing. Boonen never quite made it back, and Nuyens took the sprint for the biggest win of his life. 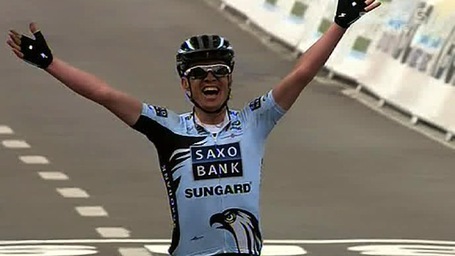