The stone paths of northern France are the subject of much cycling lore, and if you're a long-time fan of the race you might be tricked into thinking that the pave of the Nord-Pas de Calais region are as permanent as they are timeless. Surely blocks of granite are strong enough to withstand not just a few aluminum rims and the odd collarbone but the ravages of time, weather and farm equipment too.

The reality is, maintaining the famed cobbles of Paris-Roubaix, as with the hellingen of Flanders, is an annual challenge. Winter weather and spring rains turn the world to mud, destabilizing the stones. Heavy farm equipment then comes through and churns up the pave. No doubt the farmers try their best not to do so, but some damage is inevitable. Unlike the Tour of Flanders, though, Paris-Roubaix is not so much a national treasure as a regional one, a distant second on the French scene to the Tour de France. On 364 days each year this is a quiet -- some would say forgotten -- region. Cyclotourists don't dot the landscape and Mons-en-Pevele isn't being nominated for World H 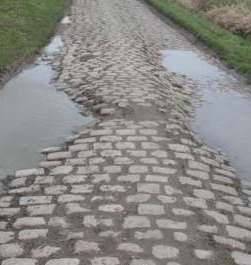 eritage Site status. If the Tour de France rolled through more often, the pave would probably be treated with proper care. I'm guessing that the road up Alpe d'Huez isn't in danger of being ignored. But maintenance of the Paris-Roubaix pave is left largely in the hands of small villages.

That's where Les Amis de Paris-Roubaix come in. Inspired by the race, by pride in their region, and by the ad-hoc efforts of race organizers over the years to preserve or substitute cobblestone sectors for use in Paris-Roubaix, Les Amis banded together over 25 years ago and started taking matters of preserving the race into their own hands. Along with the regional government and race owners ASO, les Amis raise much of the money and organize volunteer crews to do much of the work needed to maintain the race's special character. The goal is to provide at least 55km of cobbles each year, the bulk of which are in the region and in regular need of help. The group tackles maybe 3-4km worth of maintenance a year: purchasing and replacing stones, re-grading sunken areas, revegetating the sides to stabilize things, even occasionally busting open tarmac to reveal a new/old sector for use.

I spoke with the president of les Amis, Alain Bernard, via email this past winter to hear more about the challenges of keeping hell hellish. Read our convo, on the flip! 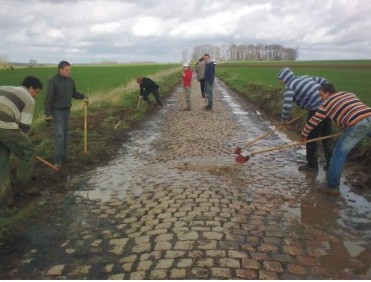 PdC: I have read about the origins of Les Amis. Now you have some 200 volunteers. Who are they in present times? Are people coming from the local region? From elsewhere in France or Europe? If strangers arrive looking to help, do you put them to work?

PdC: How do you determine if a secteur of pave needs to be fixed? Is it just when you have floods or major problems? Or is it more subtle, like the cobbles are shifting and becoming too rough?

Alain: We try to fix holes, potholes, ruts because they are very dangerous for the riders.

PdC: The work looks very hard. How much does one cobblestone weigh? How long can one person move these stones? For a few hours? [I have done some stone work at my home, just with flagstone, and that was hard enough!]

Alain: One cobblestone weighs 10 kg. The last work we did, we were able to move our stones during 5 hours.

PdC: Do you ever repair pave with cement, or only dirt? I have seen the Koppenberg has cement, maybe some other famous hellingen in Flandre. Would cement help a secteur maintain its condition longer?

Alain: We repair with sand, sometimes with sand and cement (mortar). Yes, cement is stronger.  For a hill, cement is essential to avoid gully problems.

PdC: What are the biggest threats to the secteurs of pave? Farm machinery? Flooding? Is stealing cobbles by tourists still an issue?

Alain: The biggest threats are 1: flooding, 2: heavy weights on cobbles, during thaw, 3: new projects (like motorway, railway, and industrial areas). Stealing cobbles by tourists is still an issue in two sectors (Arenberg and L’Arbre).

PdC: Do you consult with ASO to plan which secteurs you will fix? Or do you work mostly with the local cities and towns?

Alain: We consult ASO to decide the sectors we will have to fix.  In addition, after, we work with local cities, towns.

PdC: In 2010 the parcours contained 53km of pave. If any secteur is lost, can you replace it? Are there other possibilities for additional pave secteurs?

PdC: I have read this legend about the first Paris-Roubaix: in 1893, the North was distant from Paris, the economy was down, and it was easy for people in France to overlook the small cities of the North. So the organizers started Paris-Roubaix to make a stronger connection with Paris and all of France. Is this true? If yes, does the race still help today to keep the North more connected to France?

Alain: The first Paris-Roubaix race took place in 1896. At that time, Roubaix was a big town with a strong industry. Two textile manufacturers, Théodore Vienne and Maurice Perez decided to develop cycling by building a velodrome (not the present one, but an older destroyed after the First World War) and organizing a new race (on road) linking Paris with Roubaix. It was only a means to promote Roubaix.

PdC: How do you celebrate on race day? Do Les Amis have a party during the event? Or do you try to follow the race by car?

Alain: On race day, we are together in the famous "vélodrome" of Roubaix waiting for the racers. After the race, we have a party with the organization.

PdC: I understand from your bulletins that there is always more work to do. However, in my view the race has gone smoothly the last few years. From my view, the parcours has had no problems in the race. So when you see a race happen with no parcours problems, you must feel very satisfied?

PdC: Do you talk with the racers about particular issues with the course? Do racers help in the design of the repairs at all?

Alain: Unfortunately, we do not talk with racers about particular issues with the course. The racers are too busy and tired.

PdC: Do you cycle on the cobbles very often? Have you ever raced? If yes, did you race on pave?

Alain: Yes, we cycle on the cobbles. Moreover, it is a pleasure for us. However, we did not race, even on pave.

PdC: What is your view of the future of Paris-Roubaix? I know that the work is ongoing for Les Amis, and I see you have a telethon. But cycling is becoming more international, and more popular, especially in the US, Canada, UK. In fact, it is impossible for me to imagine the sport without Paris-Roubaix. Is support (volunteers and money) becoming stronger and more certain for the race and the parcours?

Alain: Paris-Roubaix will live. It is the most beautiful race in the world. Fixing is going on. However, we must be vigilant because of threats. We need much money. Today, our Nord-Pas de Calais district is the main financial partner. 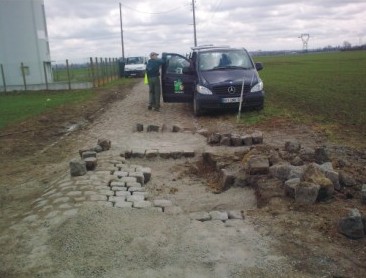 There is a funny bit in the English media packet, entitled "The convict's pad":

Saturday, March 22, a cold wind sweeps the plains of Pévèle, sleet alternating hail, sleet and cold rain. A time not to go outside ... But at the foot of the hill de Mons en Pé some figures are activated throughout a wet cobblestone path. They bend their backs in the gusts, but relentlessly, they scrape the ground with their rudimentary tools. They are a dozen, but who are they? Convicts from another time? The unconscious? Treasure hunters?

This is not merely funny but telling. This is work traditionally punted to prisoners... and yet here are people, free to leave, unmotivated by pay, still willing to do this back-breaking labor. When money and chains don't explain this behavior, what's left besides love?

Personally I dearly wanted to join a work crew last year during my trip, but arriving two weeks before the race is too late. On the other hand, it's never too late to become un ami! GO HERE and check out the English form -- for 20EUR you are doing your part to keep the race alive. You're a friend, a part of the race, in a connected way that always strikes me as unique to cycling. Maybe you can become a Friend of Yankee Stadium but somehow I doubt it's the same. Not for 20 bucks, anyway.

[Note to self: benefactor members get a mini cobble trophy. VDS 2012 should have a cobbles competition... and a very awesome trophy.]