I can't locate the video, but it's from CBS Sports' coverage of Paris-Roubaix. As this screencap of Greg LeMond looking like he just returned from a minstrel show demonstrates, it was a Real Roubaix: 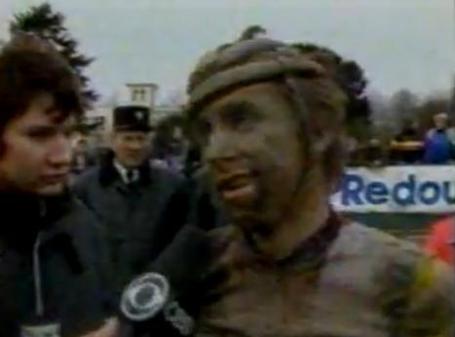 But it was Dutch rider Theo de Rooij whose assessment would go down in Paris-Roubaix lore. Now The now-former DS of  Rabobank, de Rooij had just plugged away at the course in service of his Panasonic team when CBS asked him what he thought of the race.

"It's a bollocks, this race!" said de Rooij. "You're working like an animal, you don't have time to piss, you wet your pants. You're riding in mud like this, you're slipping ... it’s a pile of shit."

So would you come back next year?

"Sure, it's the most beautiful race in the world!"

What I especially love is that de Rooij immediately senses the awesomeness of his reaction and cracks up, almost maniacally. Paris-Roubaix, ladies and gentlemen.