The Tour de France exists as a series of stories. Vietto's noble gesture. Anquetil and Poulidor on the Puy de Dôme. Hinault and LeMond on the Alpe. Roche at La Plagne. Armstrong's victory salute into Limoges. Riis's taunting on the Hautacam. Many of the Tour's stories began life as images but they've long since left their roots behind, grown in the telling and the retelling and assumed a life of their own. The Tour is a race of words. Paris-Roubaix is a race of images.

Share All sharing options for: Paris-Roubaix: A Bookshelf Round-Up 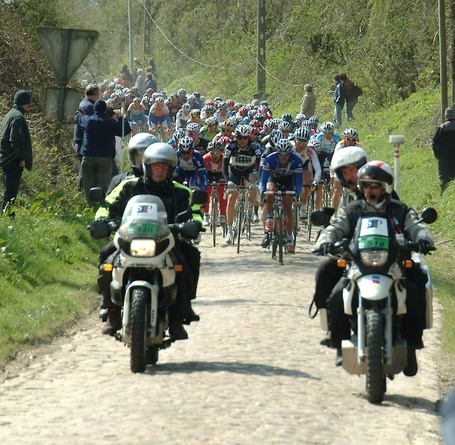 Think of the Queen of the Classics and it's images you come back to most. Words seem superfluous when it comes to l'enfer du nord. Other races exist for writers. Paris-Roubaix is a race for photographers. Dirt-covered riders. Crashes on the pavé. The dead-eyed stare of riders in the showers of Roubaix's vélodrome. If it wasn't for copyright restrictions, I wouldn't waste a word trying to write about the Hell of the North. I'd just put up a gallery of photographs. Maybe Timm Köln's Roubaix gallery.

Of course, images alone don't do Paris-Roubaix justice. Most races, the sound you'll remember is the soft whirr of the peloton passing. My abiding memory of the first time I went to Paris-Roubaix is of the sound of the support cars bottoming out as they thundered over the cobbles. The sound of metal on stone. Add in the cries of 'Oooh!' as some hapless sod decks it near to where you're standing. Really, if you only ever go to one bike race in your life, that race should be Paris-Roubaix.

Failing being there though, what do you do? Well obviously there's Jörgen Leth's A Sunday In Hell, the cycling film to beat all cycling films. Cycling is a strange sport, you've got your meat-heads and your hair-gelled prima donnas and your gear-fetishists and your espresso-slurping Rapha-fashionistas and your be-anoraked stattos and your saddo nostalgists with their arses to the future, gazing wistfully at the past. Stick em all in front of Leth's film and they'll unite and agree on one thing: it really is a thing of beauty.

Leth is a strange character. Divisive hardly begins to describe him. There are shades of Anquetil about him. Particularly when you look at his life in Haiti. Some equally find his views on doping problematic. But, while I don't agree with them, I do admire the honesty with which he expresses them:

"Cycling is not a clean sport. It is an unhealthy sport, an extreme sport. And that's how it is supposed to be. It is what I have always cherished about cycling. It is filled with amazing, oversize personalities, eccentrics and people jeopardizing their life. Anything else is based on a stupid illusion that the sport is clean and riders should be rôle-models for young people. It's a crock of shit in my opinion."

As a film-maker though, Leth is pretty amazing. Get yourself a copy of Lars Von Trier's The Five Obstructions one night and - if you haven't put your fist through the TV screen before it's finished (Von Trier has that effect on some people) - you'll get a taste for what it is that makes Leth special. He's made several cycling films - one, The Impossible Hour, about Ole Ritter's attempts to retake the Hour record in 1974 - but it's his Paris-Roubaix film that really stands out.

A Sunday In Hell tells the story of - a story of - the 1976 edition of l'enfer du nord. That's the same one Tim Krabbé covered as a reporter. The era of Roger De Vlaeminck, Freddy Maertens, Eddy Merckx and Francesco Moser. Leth's is an elegiac, impressionistic telling of the race, soundtracked by classical music. Leth's ability as a film maker, coupled with his passion for this sport, make him the perfect man to tell the story of La Pascale.

Of more recent vintage is Road to Roubaix, which is more traditional in the way it tells its tale. You get the history of the race, and then the story of one edition. Ten years from now, this one will be a classic.

Move beyond the world of cinema, and what have you got to help you get a grip on Paris-Roubaix? Let's look at four books: Pascal Sergant's Masters Of The Pavé - A History Of Strongmen; William Fotheringham's A Century Of Cycling; and two books from L'Equipe's book-publishing stable, The Spring Classics - Cycling's Greatest One-Day Races and Paris-Roubaix - A Journey Through Hell.

Sergant's book is a sweet little thing. A hundred and sixty pocket-book-sized pages, it tells the story of the Hell of the North through portraits of the men who have won the race: one page of (somewhat flowery) text for each winner, and one page with an image of that master of the pavé. If you're an arse-to-the-future nostalgist, Masters Of The Pavé nicely fills in the blanks on some names that the rest of the (Tour-centric) cycling press have forgotten. It only covers the story up to 2001, which is fine, you can more or less paint your own pictures of the winners since.

The last few pages of the book are a statto's delight, with lists of winners, average speeds and factoids about obscure doubles and trebles. The balance between text and image leans more toward text, but the images - which include course maps from a single edition of each race, as well as some photographs - do sometimes make the book something you might want to leave lying on your coffee table. The text itself covers the basic history of the race and then tears through the most memorable anecdotes from that history.

Similar to Fotheringham's book is The Spring Classics, which, despite its title, actually covers the Spring and the Autumn Classics. Where it differs from Fotheringham is in being more of a coffee-table book and in being more poetic where the text is concerned. Well, what else would you expect from L'Equipe's book-publishing stable?

The last of this quartet of books is undoubtedly the best. Paris-Roubaix - A Journey Through Hell, also from L'Equipe's book-publishing stable, finds a reasonable balance between text and image - it's still primarily a coffee table book, but by only having to tell the story of one race, the authors have more time to explore the obscure corners of l'enfer du nord.

A notable mention to one other book: William Fotheringham, who practically single-handedly keeps the British cycle-publishing industry alive, also touches upon Paris-Roubaix in his recent Cyclopedia, in which he gives-over four pages to the race, another two pages to pavé and a page to Jörgen Leth. As an if-you-liked-this-try-that service, he suggests fans of Paris-Roubaix should also check out the Eroica in Tuscany, the Tro Bro Léon in Brittany and, er, the East Midlands Cyclassic in the UK.

Beyond these there's foraging. You can wade through biographies, memoirs, histories, whatever, and slowly piece together a story, as say I did with the Sean Kelly tale, built from David Walsh's books, with other bits from here and there. That's a lot of hard work though, if what you're looking for is just a story of La Pascale. But hell, isn't that just right for the race it is?