After Tearful Goodbye... The Show Goes On

Share All sharing options for: After Tearful Goodbye... The Show Goes On 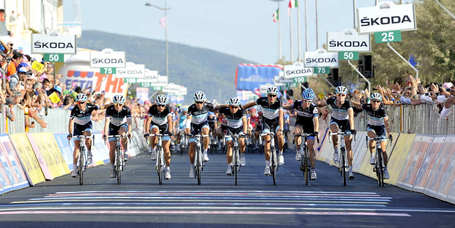 Today was a memorable day for the sport of cycling as the Giro d'Italia peloton and fans paid tribute to Wouter Weylandt in a rolling memorial along the Ligurian coast. Silence or polite clapping was all that greeted the riders as they passed by large crowds along today's planned 214km stage from Genoa to Livorno. Many fans held aloft race number 108, Weylandt's number, while many more crafted their own messages of tribute. In honor of the fallen Leopard-Trek rider, the cyclists did not race today; instead, they rolled gently over the course, allowing each team to take up position at the front of the race for a period of time. For the final five km the Leopard Trek team moved to the front, spread across the road, inviting Garmin-Cervelo's Tyler Farrar -- a dear friend of Weylandt's -- to join them. With church bells ringing, they crossed the line arm-in-arm, tears streaking down cheeks, with the rest of the peloton a few seconds behind out of respect for the stricken team and Farrar.

What happens next, only time will tell. Members of Weylandt's family and inner circle, like Farrar, are disembarking Italy for Belgium as we speak. The Leopard-Trek team has not said yet whether they will continue, though an announcement is likely very soon. For riders who didn't know Weylandt, for whom this is a tragedy of cycling more than a directly personal loss, history shows that they will return to racing and maybe after a few days it will start to feel normal again. From our distant perch, it is very hard to imagine someone summoning the sheer physical strength and razor-sharp focus this sport absolutely demands, day after day, for long hours at a stretch. For friends of Weylandt's, we imagine them being unable to find that focus and departing the race, though in some cases, friends and relative strangers, it may work better to channel their grief or confusion or whatever emotions they feel into pounding the pedals. It's also hard to imagine how the peloton will once again put away the mortal fear each rider keeps locked deep inside, a necessary prerequisite to simply being a professional cyclist. Again, history shows that they will.

At some point the show does go on. A race has been organized, in tremendous detail and at tremendous cost. Apart from those who must be excused from continuing, the rest of the peloton is in Italy, with a job to do. Hanging around strange hotels in a foreign country, being alone with one's thoughts and memories, sounds like torture, so being bike racers it will probably be those hours spent racing which provide the most relief and release from the sadness. When exactly those sensations give way to the kind of mentality required to truly race is an unfolding mystery. My guess is that tomorrow will be half-raced at most, that collectively it will still be too soon, but if some riders want to contest the stage it may not be frowned upon. That's just a guess. One thing you can be sure of, if the peloton decides that tomorrow is too soon, everyone will get the message and in all likelihood the message will be followed.

Here at the Cafe we will return to covering the race, and in fact we already have, with Gavia's preview of tomorrow's stage 5. Unlike the peloton we as a community do not organize ourselves to any great extent, but similar to the peloton it will be up to each of us to decide when we feel like engaging in a race again. My guess is that things won't feel the same right away -- I know I don't feel like writing a jokey power poll any more than you feel like reading it. But if the family of Wouter Weylandt wishes the Giro to keep racing, then I don't believe it is disrespectful in any way for us to continue following it, and I would further offer that the Cafe, like a real-life pub, is a place to let go of the weight of the world. When exactly you consider this a good thing for you is up to each individual, but the Cafe will be here, doing what we do.

In Memory of Wouter Weylandt