Share All sharing options for: Minor Matters... What's the Buzz? 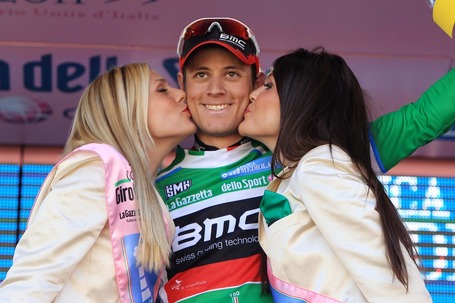 The Tour de France puts on a pretty good show too, you know. Even I, as one of the head cheerleaders for the Giro, can admit that the Tour does its minor jersey competitions very, very well. The points competition is the premier sprinters' battle of the entire season, making all those first-week flat stages worthwhile in the end. The king of the mountains competition can still boast the maillot a pois, the world's best-looking prize, even if the competition itself

has lost prestige from twenty years ago when it stood for true climbing greatness. And the best young rider competition is extremely robust, considering the quality of promising young stage racers at the Tour who usually can't hope to get in yellow.

The Giro? Maaaaaa, iiioooo.... well, they can certainly boast about the quantity of minor competitions. I did a full roundup of the multitude of mini-sprints, prizes, and assorted honoraria for going fast, playing nice, or some combination thereof two years hence, and the state of play is essentially unchanged. And no doubt, for a rider or team with nothing better to do, screwing up your strength for a few thousand euros in play in the traguardo volante is in fact something to write home about. But in cycling, thanks to the Tour, we think of five competitions: the overall, the three remaining jerseys (points, mountains, youth), and if we're feeling especially mindful, the team competition. Let's do a quick roundup of where things stand in those categories -- minus the general classification -- in the Giro so far.

More minor matters... on the flip!

Logically the points competition of the Giro would seem to mirror the Tour's maillot vert, but in fact it couldn't be more different, especially now. With the neutralisation of yesterday's stage -- originally one of very few sprint stages in this Giro -- the hunt for sprint wins has lost all meaning for the maglia rossa. In fact, with at most three remaining chances for the sprinters, it's possible you will see that element of the competition minimized to almost nothing. Yes, Alessandro Petacchi has at stake a chance to extend his win total (22 now, highest among active riders), but does Mark Cavendish continue slogging across Italy for those two precious days? Only if he can't think of anything else to occupy his time.

Instead, the points competition will become a sidebar to the GC, and will be won by the rider who finishes most consistently in the eight mountaintop finishes yet to come, as well as the 2-3 mountainous stages with valley arrivals. The presence of those extra stages -- tomorrow's (which might go to the sprinters after all), plus the two mellower Dolomite stages 17 and 18 -- will likely swing the jersey away from the overall winner to someone who shows up on days when the maglia rosa battle is in truce. Maybe. On the other hand, with so many uphill arrivals, if a dominant rider emerges we could see him pile up the prizes.

This is hardly unusual, by the way. Since 2000 only four sprinters have taken home the maglia rossa (actually, the maglia ciclamina, a purplish color, as the comp was known from 1970 to 2009) -- Italians Daniele Bennati, Petacchi, Mario Cipollini and Massimo Strazzer. Since 2005 only Bennati represented the fastmen in the final competition, in 2008. Three times in the last eight years the overall winner took the points too. Italy simply isn't a great place to set up flat stages, unless you want to spin around Venice and Milan all month. Historically the sprinters have fared a little better than they have more recently, and I'd be remiss without mentioning the eight-year period in the late 70s and early 80s when Francesco Moser and Giuseppe Saronni split four victories each.

Thus far, the only names worth mentioning in the current standings are Christophe Le Mevel, second to Petacchi at 26 points, and Fabio Duarte with 20. Neither rider is expected to figure in the overall, and can perhaps afford to concentrate on racking up points before i big take over. But Duarte will be working for Menchov, and anyway each stage win is worth 25 points (and descending from there), so the current totals are practically nothing.

The King of the Mountains comp at the Giro has gone the way of the Tour's, falling into the hands of a self-selecting cast of minor characters from the GC perspective, though the relentless climbing does assure that the winner is pretty deserving. [With an asterisk -- as in France, the Giro's KOM comp has its share of suspect winners: Leonardo Piepoli and Emmanuele Sella, for starters. Even Matt Lloyd, last year's winner, got kicked off his team recently for reasons we don't exactly know.] Despite the plethora of uphill finishes, the classifica scalatori hasn't gone to the overall winner since Marco Pantani in 1998 (speaking of asterisks). One of the big reasons is that the daily cache of points isn't that large, only 10 for a major mountain summit and 15 for a mountain top stage win. Stage winners at the Tour, by contrast, get double points if it's an hors categoire or cat-1 climb, a much more significant haul, and even at the Tour the tendency of the GC guys to allow someone else the earlier points means the Yellow Jersey doesn't often take the polka dots too.

This year we should see the lesser names in control again. The score probably won't be settled until Stage 15, and we might not even know who's all that interested much before then. Stage 13 is when we start seeing multiple high-rated climbs before the stage end, and stage 15 is home to the Cima Coppi, the highest point of the race, which is the only place the Giro awards double-points. For now, BMC's Martin Kohler leads with a mere ten points. By Friday's ascent of Montevergine his lead should be gone, and by Sunday's Mount Etna double-climb we might be able to identify who seems interested in the jersey.

The Best Young Rider comp -- a standard culling from the GC of guys 25 and younger as of January 1st -- is a pretty good reflection of the overall quality of the Giro field, since young talents show up for the race at roughly the same rate as the established big. Since the competition was revived in 2007, the winners have been notable enough: Andy Schleck, Ricardo Ricco, Kevin Seeldraeyers and Richie Porte. Whether the first and last ever win a grand tour is an interesting question; Seeldraeyers is more of a climbing specialist and Ricco is off making license plates or lattes or something.

Like the GC, the problem for the Giro is whether the young stars of tomorrow are here to win or to prep for July. For a variety of reasons, starting with the futility of using such a difficult Giro as this for "training," we might have a nice battle on our hands. Porte won't be a factor; he dropped 18 minutes today, not surprising for a guy who was included in his team lineup at the last minute. But after today's hilly route we can start to see who's in: presumed favorite Roman Kreuziger sits fourth in the classifica giovani, 24" behind leader Steven Kruijswijk, who will be keeping the jersey warm for a little bit. Seeldraeyers is hanging in with the top group, and Fabio Duarte could be a very interesting person to watch. Peter Kennaugh and Jan Bakelandts will have the luxury of riding for their results, while several of the other guys still within five minutes of Kreuziger and co. will probably go on team duties, to the detriment of their own times.