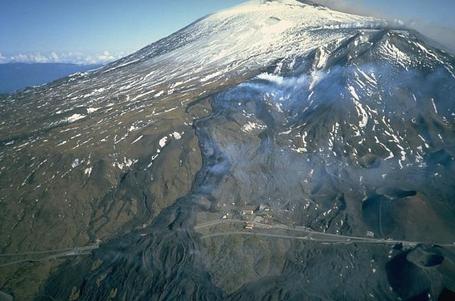 Stage 9 of the Giro d'Italia will feel like stage 1 to the favorites, as the race finally starts pointing up, way up, this time on the slopes of Europe's most active volcano, Sicily's Mount Etna. Assuming the mountain isn't erupting (as it did briefly earlier this week), the riders will make two ascents up its northeastern and southern flanks, following a promenade along the Sicilian Riviera (I may have made that name up) from Messina to the outskirts of Catania. This should be a truly gorgeous stage both early and late.

The main course comes in two helpings, an 18km climb to La Lenza and a 20km climb to the Rifugio Sapienza, pictured above. [The road ends at this spot, having been buried under a lava flow.] This is the only stage of the Giro that I personally have driven, and my dim recollection is that the road simply isn't that terrifying by grand tour standards. Both climbs average around 6%, pedestrian numbers for these guys. But 38km of climbing is nothing to sneeze at, and with a rest day on Monday, the pace will be high enough to hurt a few guys.

Stage Battle: The chances of a breakaway succeeding aren't great, at least regarding a long-range break. Few riders will have the ability to outrace the stars of cycling on such a long climb, apart from the climbers themselves. But a short-range break might be left to its own, assuming twenty to thirty guys survive over the climbs. A rider like Stefano Garzelli would be someone to keep an eye on, though he'll have company. The KOM points hunters will come out and play too.

Maglia Rosa Matters: At last the pink jersey will likely fall to one of the serious contenders. Probably -- at the end of week one the jersey is sometimes given the hot-potato treatment. Alberto Contador is the best bet, given the current standings and his obvious abilities, and he's not afraid of the responsibilities of defending the jersey either.

Cue Opera For: Pieter Weening... maybe. Sometimes a rider like Weening can turn in the performance of his life to defend a jersey he knows he'll lose before long. And sometimes the stars are happy to let him do so, keeping the pressure off their team in the process. But these are long climbs. Either way, the cameras will be on Weening all day.

Map and profile on the flip. 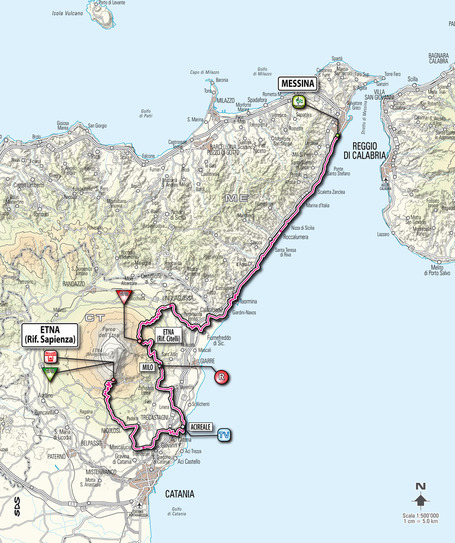 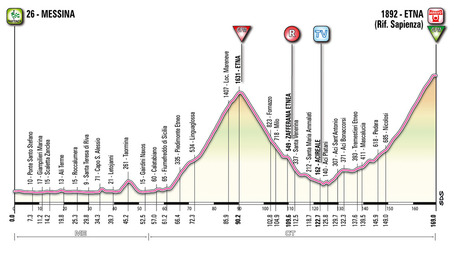