[UPDATE] Shortened course, later start time. They haven't said exactly what the course will be, but they'll start at 1.15pm. So far they are saying "if the weather improves." And they'll make a call on that at noon. Gav sent us a postcard: 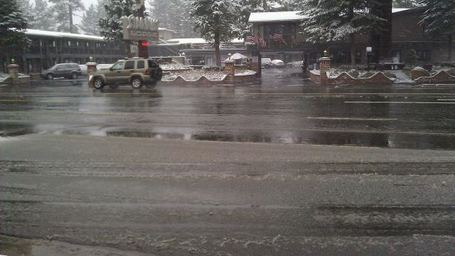 I get press releases:

As everyone is aware, there is a storm front predicted to reach the area. Therefore race organizers, in conjunction with the commissaires, teams and public safety organizations, have developed a number of contingency plans with the safety of the riders and fans being the number one priority.

And those contingencies would be?

They say they'll make a decision by 9am local time tomorrow. Fortunately the Sacto Bee did some sleuthing and came up with a few.

Race officials could eliminate the Northstar finish and reduce the stage to a prologue along part of Lake Tahoe, or, in a worst-case scenario, cancel the opening stage. Another possibility is a postponement of a few hours, which could allow riders to complete the entire first stage if the weather improves throughout the day.