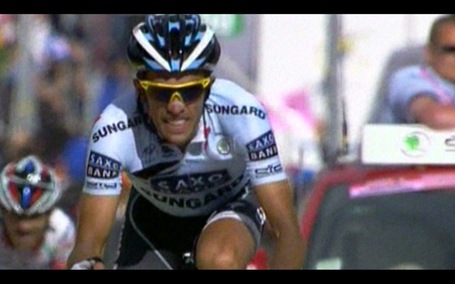 So we ask... is the Giro d'Italia over? Alberto Contador of Saxo Bank, the greatest grand tour rider in the post-Armstrong era, attacked his rivals on the barren, forbidding lava fields of Mount Etna, 7km from the finish. Contador had company in the person of Jose Rujano, whom he dropped with 1km remaining, and finished just under a minute ahead of the other favorites. Contador captured the maglia rosa and a lead of 59 seconds over his closest rival, Kanstantin Sivtsov of HTC. Other big names like Nibali and Kreuziger are over 1.20 behind, while Denis Menchov and Joaquim Rodriguez lost big time today.

Contador's attack leaves everyone wondering, if he can do this on one of the less difficult climbs of the Giro, what will he do when the race reaches the Dolomites and Alps in the final 10 days? A lead of this size already puts Contador in position to hold and defend the maglia rosa, and considering he's the best attacking climber this is quite a luxury. Contador took the jersey earlier than expected, but nobody has the resume and the confidence he has, so the psychological blow to his rivals is well worth the added responsibility of defending the lead for a full two weeks. Results:

Full results here. Rest day tomorrow. Get used to this: 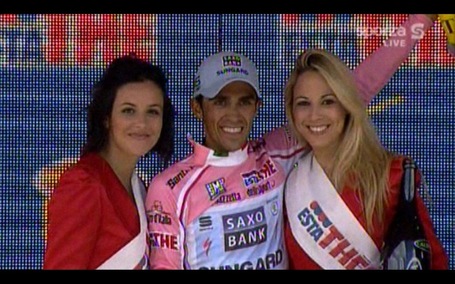