Despite paralleling along the spine of Abruzzo and following a few road signs for the Grand Sasso d'Italia, Tuesday's tenth stage of the 2011 Giro d'Italia favors the sprinterly-inclined... provided they have a little extra kick in them. The Giro officially calls it a pianeggiante (flat), not an easy thing to devise in southern/central Italy, but the ride along the Adriatic coast will include only the odd small hill or bluff in their pathway, past the fishing town of Pescara to Giulanova, where the stage turns inland in the direction of the Parco Nazionale Gran Sasso d'Italia, or the park of the big rock. Sort of Abruzzo's answer to Half Dome. Werd: 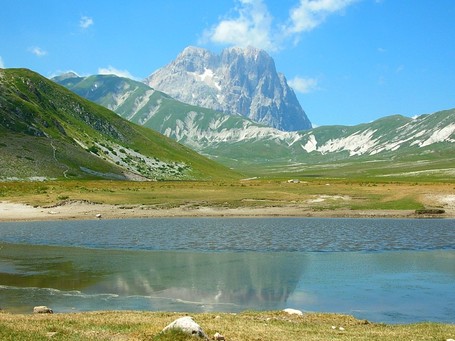 But that's just the backdrop. The climbing stops before it gets underway, with only a slight rise in the road of false-flat proportions before the finish in Teramo. The steepest part comes in the last 100 meters, and even that's only 4%.

Stage Battle: Should be a ferocious one, with both early and late escapes, as well as a chase in earnest by the sprinter teams. Despite the slight rise in the end which makes one think of Francisco Ventoso of Movistar, winner of the tricky sprint in Tropea Saturday, I suspect this course will do less to weaken the Cavendishes and Petacchis of the peloton, so while the last few meters will draw on an extra bit of power, look for the main suspects to be there in the mix. And just because Cav gets to the line doesn't mean he's the favorite, though on a short stage everyone should be at full power.

Maglia Rosa Matters: Nothing to speak of. As desperate as the other contenders may feel after getting Contadored yesterday, there's nothing they can do about it Tuesday, other than maybe make Bert mad. Bad idea.

Cue Opera for: Danilo Di Luca. The race skirts between his natal village of Spoltore and his current residence in Pescara, so you would think he will be rather thoroughly invested in a result here. But a) everyone knows it, and b) he's not strong enough to make it happen by anything other than surprise. Boo frickin hoo, say the tifosi... 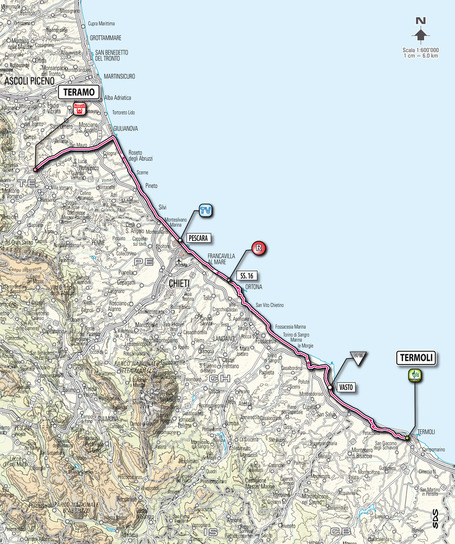