Since 2004, the town of Gatineau in the Canadian province of Quebec has been hosting an annual cycling festival and Gran Fondo, "La Grande Visite de Gatineau". Last year they added a couple of UCI women’s events: a time trial, the Chrono Gatineau, to open the festival, and a road race, the Grand Prix Cycliste de Gatineau, to be the centrepiece. This year the whole event has been renamed the Grand Prix Cycliste Gatineau after that road race, and moved forward from June to May, possibly to coincide with the launch of a local Boris Bikes scheme. It’s a four day event running from Thursday to Sunday, including a number of Gran Fondos, events for children, a bike show, and a men’s race for Masters and Juniors, in addition to the two UCI women’s races. And it all seems to be done on a very limited budget, as the Daily Peloton learned last year. 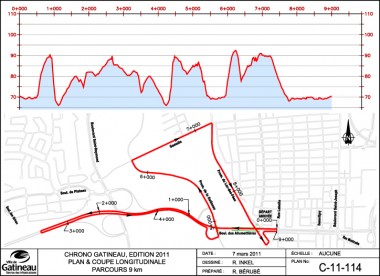 It all begins on Thursday with the Chrono Gatineau, two laps of a closed off 9km circuit in the centre of Gatineau which looks lumpy until you look at the scale down the side. A total of 36 riders will set off in three waves of 12. Lat year Evelyn Stevens came in ahead of Columbia-HTC teammate Linda Villumsen. Neither of those return this year (the competing timetrial in California may be in part to blame, but not many of the big names travelled to Canada last year), and the start-list is dominated by the French. Watch out for Jeannie Longo-Ciprelli, Amber Neben, locals Clara Hughes and Erinne Willock, plus my sympathy pick of Ganna Solovey who needs a big result to avoid becoming this decade’s Sergei Honchar. Canadian Cyclist have a couple of photos out from early arrivals recceing the course, and the first starter Allison Lampi of Reform Cycling is on Twitter so could perhaps be begged to send out some updates. S’il te plait. If you want to see the course in more detail then you can download the map as a pdf.

Then on Saturday everything returns to the same circuit, which is extended slightly at the start-finish line to 9.8km, presumably to find a more suitable spot for a whole peloton to turn, and ridden ten times for a race of 98km. And in what has to be the cutest prologue I've ever seen to a race, there's a Race With The Pros timetabled for 9:30 on Saturday morning, an hour and a half before the race, where 4-9 year old kids get to potter around a 1km circuit with the stars themselves. Aaaww. There’s no start list for the race up yet. Ho Hum. Tiddley Pom. I’ll add any more if I can find it. If I can find it. Tiddley Pom.