It's another sunny days in Luxembourg, and after watching three days of racing, it feels so wrong not to be heading out to another race. I'm a lucky girl - the Horizon Fitness Team said that if I got myself to Luxembourg, they'd look after me and take me to the three days of racing in the Festival Luxembourgeouise du Cyclisme Féminin - three separate races in three days. I've already written about the City Trophy Elsy Jacobs, but here's part 1 of my report on my little glimpse of life "backstage" at the two road races - the GP Elsy Jacobs and GP Nicolas Frantz. Part 2 will have more of the race reporting, including what it's like in the team car, and part 3 will come later, when I'm back in the UK, and more importantly, when I can get the video interviews off my camera! 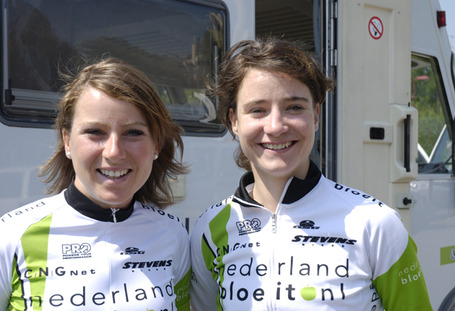 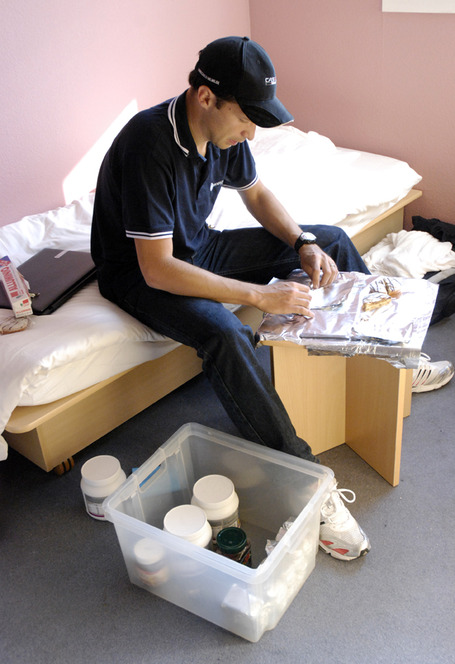 Both races days started in the same way - breakfast in the hotel on the team table, and then chatting with Stef as he filled bidons and prepared race food for the riders, ready for the race - portions of swiss rolls, frangipanes, and my personal favourite, "sandwiches" made of waffles, filled with jam. All these little tiny bite-sized packages, neatly wrapped in silver foil, were stacked in cool boxes and packed in the van with the bikes, kit and bags of useful things. 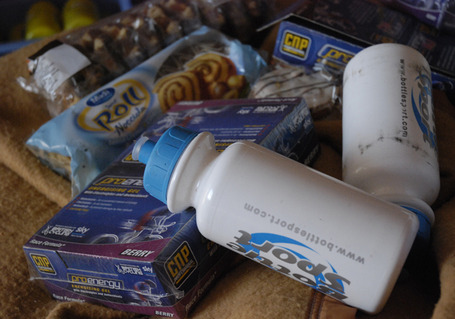 After the 8.30 breakfast, the riders went back to their rooms to relax before the race, and another meal at 11am - and Stef headed off to the race towns. First of all we staked out a good parking spot, with room for the bikes to be put out, & the riders to turn up later, and we headed down for the team registration and the Managers' meetings. These took places in buildings commandeered for the day - what looked like a sports hall in Garnich, for GP Elsy Jacobs, and the fire station in Mamer for GP Nicolas Frantz. The managers have various administrative tasks - show the race l 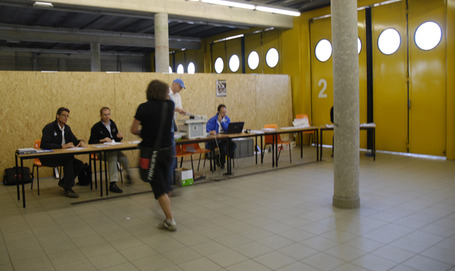 icenses for the teams and themselves, confirm who's racing, pick up the race numbers, stickers for their cars etc - and here's a fun fact: Sometimes we complain about the lack of accurate startlists before a race - well, it's not necessarily the fault of the race organiser! They are given a "long" list of who might be coming - but it was only after the registrations that they know for sure.

After the registrations, which were mellow, and over about an hour, we did what seems to be THE most important thing for a DS - we found coffee! Ah yes, the DS and coffee relationship! In Garnich it was easy, there was a café waiting for us, but in Mamer, it was much harder - you don't want to get in the way of a caffeine-starved DS, that's for sure! Stef deserved a prize for his "charming Englishman" impression, persuading a pizzeria who'd previously said it couldn't be done, to bring us coffee to the outdoor tables they were still setting up. Poor things, they were descended on pretty fast by other desperate groups! Happily caffeinated, it was time for the Managers' Meeting.

This felt a little bit like school - the tables at the back filled up first, & there was plenty of laugh 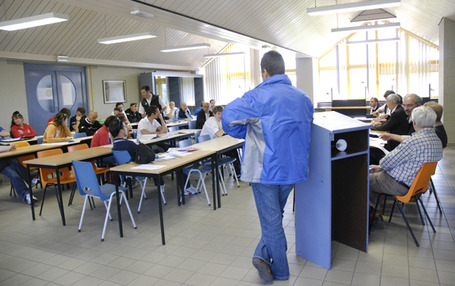 ing and joking. It was fun to see the interactions - everyone was very friendly with each other, but there were definite little groups that formed, generally around shared languages. The Managers' meetings were conducted in French, with translations to English - starting with calling the register (so school-like), going through the details about the radios, course issues, anti-doping, etc - and then onto the draw for car numbers. With 25 teams, an early number was vital. In women's day racing they draw the numbers in two batches - UCI "pro" teams and national teams together, and then the other teams (like Horizon! Our lucky number was 22, on both days) - and any team whose manager didn't show up was given the last number! On the first day, everyone joked when Garmin-Cervélo and HTC drew numbers 1 and 2 - on the second, there was even more laughing as things went wrong halfway through, with a DS taking the wrong number & throwing it all into confusion.

After the Managers' meeting, they dispersed for more coffee, and for big teams to oversee their mechanics, and smaller teams to sort out their bikes themselves. The teams were parked up in car parks, the bikes arrived a 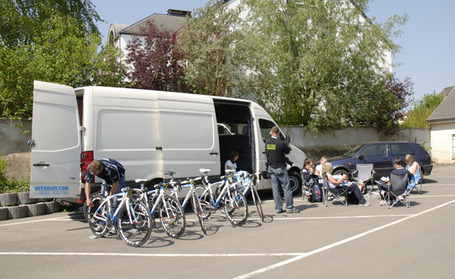 round 10.30 (more or less) and the riders not 'til much later. Teams mark out their "territory" in a variety of ways to save their spots for their vehicles - and of course, the earlier you're there to do it, the better the spot. There was no hierarchy over who went where - so in Mamer, the huge HTC bus and motorhome were parked next to Horizon's rental van and car.

So for people who don't have jobs to do, before the riders turn up? The organisers had thought of us - and provided food and drinks stalls. Eating fresh waffles and strawberries in the sunshine, while sitting on the grass and listening to birdsong is a pretty good way to spend half an hour or so! As it got nearer to the start, jazz bands appeared, and it felt like a lovely open air festival.

Once the riders turned up, they changed, checked out their bikes, talked tactics and eith 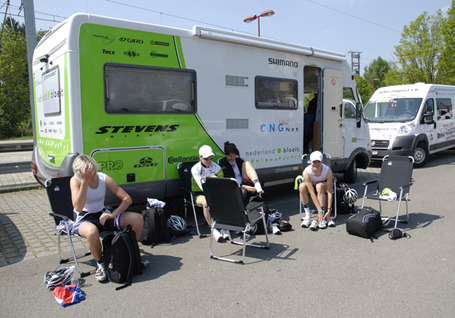 er sat in their motorhomes, or in circles of fold-out chairs in the sun, getting massaged, embrocating themselves, pinning on their numbers and generally preparing. It was all very relaxed - you can't discount the importance of pre-race relaxation, I was told - it can make all the difference. For a fan, it's a strange experience, walking through the car parks, seeing all these amazing riders in real life, doing the most ordinary things. "She looks just like her photograph!", I kept thinking - except for the fact that so many riders looked a lot smaller, and more fragile, than they do from photos. You can look at a shot of a pack of Dutch sprinters tearing down a finishing straight, and they look fearsome and enormous - but only in relation to each other, not to non-cyclists!

Then for the signing on - the crowd of spectators came together around the stage, a 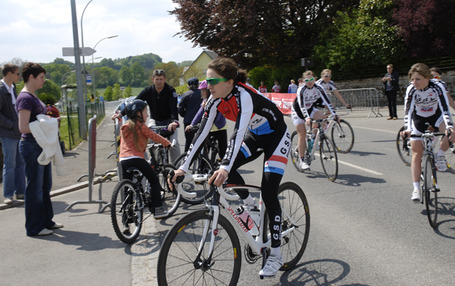 nd over about an hour, riders would arrive - riding or walking up the road, right in among the people, so close - so if you're a brave soul, you can say "Good luck!", or ask to have a photo with them. On my first day I was a ridiculously starstruck - but people were so friendly, so I summoned up my courage. I had to swallow my nerves at say hi to Vicki Whitelaw, for example - and of course, Marianne Vos! I should apologise to all the riders I fangirled at, for appearing slightly insane, but thank them for all being so sweet and friendly! And huge thanks to Helen Wyman and Vicki, who introduced me to riders, and got people to sign things as VDS prizes - I really appreciate it! 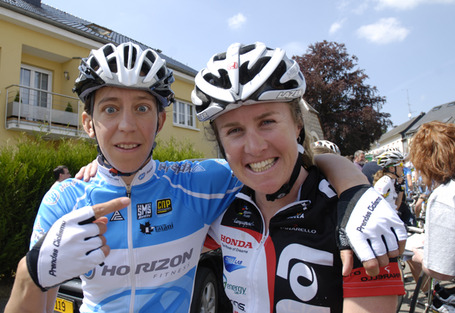 There was no set pattern to the signing on - teams might get it over with early, then go for a spin around the final lap, or head back for more 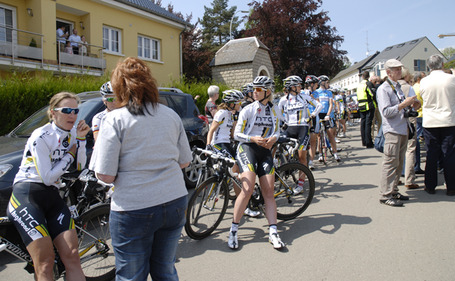 preparations, or do it at the last minute and then line up. The commentators would tell the crowds fun facts about the riders - and some had mini interviews - and little bottlenecks of riders would form - so fans would be surrounded by 3 or 4 teams, with their shiny kit and glossy bikes - all together. Riders would be chatting to each other, people they knew, people who asked them random questions - and catching up with riders from other teams, who they hadn't seen for a while. Very friendly and calm.

I watched the sign-ons on the first day, and hung around the car parks on the second - but didn't have the start-line experiences, as I had a date with the Horizon team car, and needed to be ready for the start.... What's it like in a team car, and what happened in the races? You'll find out in part two! 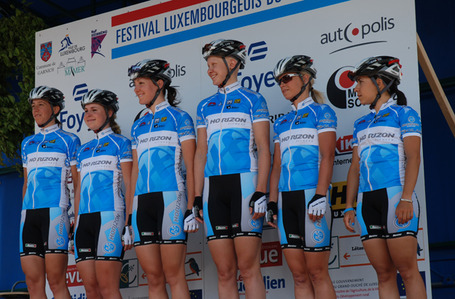 Huge thanks to all of the Horizon team, who were lovely, especially the DS, Stef Wyman, for answering all my stupid questions, introducing me to people and helping me make the most of my time out there - and to the organisers of the Festival, who made everything smooth and lovely, and were always very friendly - and of course, to all the riders and team staff who were so friendly and nice to me - you all made it the most fantastic trip!

Photos and report by and copyright Sarah Connolly