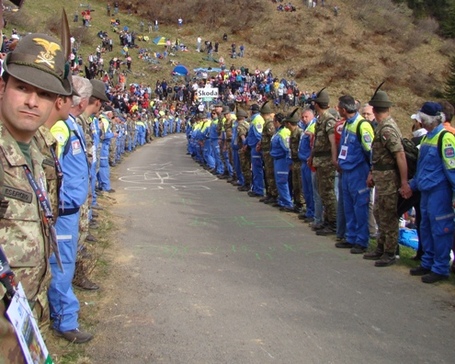 The 2011 Giro d'Italia says goodbye to Austria tomorrow and hello to Hell, a two-pronged uphill horror show known as Monte Crostis and Monte Zoncolan, separated by the most treacherous descent in the race. This is likely the main event of the Giro, featuring two of the three hardest climbs of the race over 210km, proving that sometimes life is nasty, brutish and long. There remains a chance that the Giro winner won't be revealed until later, but all bets are on this stage making the most profound selection.

The Giro has confirmed that the race jury removed Monte Crostis because of numerous team and rider protests over the safety of the descent. Follow the link below to see what they mean. Zomegnan issued a statement affirming his belief that it was safe, but they're removing it anyway. I can't tell from the translation if they intend to add any other climbing. From the town of Ovaro, you can go left to Monte Crostis and right to Monte Zoncolan. The original plan was to go left, do a 40km loop, and return to Ovaro for the final ascent. If they simply axe Monte Crostis, then they've shortened the stage by 40km. Which makes this clearly the second or even third-hardest stage of the Giro... a 150km promenade over some minor climbs to the big show. There was consensus the other day that the Crostis descent wouldn't really be raced because it was so awful, so in that sense eliminating it does little. But the extra climbing is another matter.

Why? Steepness, both in the ascents and the descents. After 150km of cat 2 and 3 climbs, the riders finally reach the footof Monte Crostis, a 14km beast averaging 10.2% with a max of 18% near the top. The final 4km average 12%. Coming down off Crostis involves a terrifying trip, -8.3% average, on gravel roads so narrow and slippery that the race has installed netting in the corners. Good thing, because the forecast calls for rain.

At the bottom of the descent the riders have about ten seconds to settle their nerves before starting up Monte Zoncolan. When people speak of the hardest in-competition road climbs in Europe, the Zoncolan always makes the short list. Its full 10km average 12%. Average. The max grades are 22%, occurring in the midst of an unrelenting 5km section in the middle which itself hovers at over 15%. Really, it's hard to describe this climb without using profanity. Look for plenty of chatter tomorrow about gear clusters -- you'll see numbers not ordinarily found on a pro cyclist's bike. A 27 is merely a starting point. Triple chainrings aren't out of the question. I suppose it's worth mentioning that parts of the Zoncolan are on gravel, though that's beating dead legs.

Stage Battle: The GC guys will be in complete command today. No breaks will survive.

Maglia Rosa Matters: Along with stage 20, the gaps will be at their maximum. Whether this results in sorting or unsorting the classification remains to be seen. I should also note that, although Alberto Contador has dominated the first two major climbing stages, those were on gradients half as steep. Does that mean he won't dominate on this stage? Ah, nope. But it does mean his rivals should hang on for another 24 hours at least before allowing depression to sink in. You never know.

Cue Opera For: An awful lot of GC hopes.

Much graphic-porn on the flip: 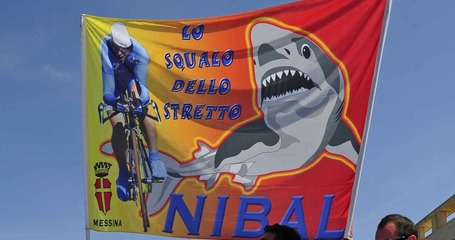 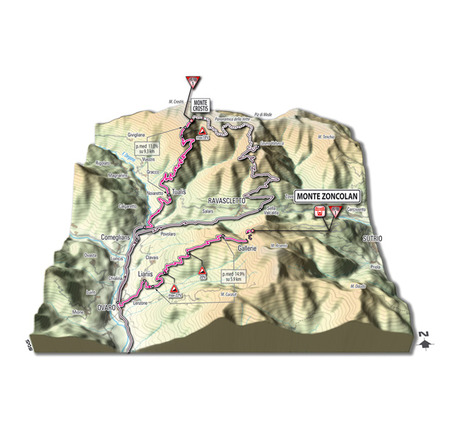 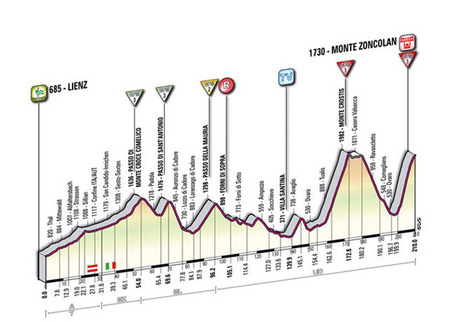 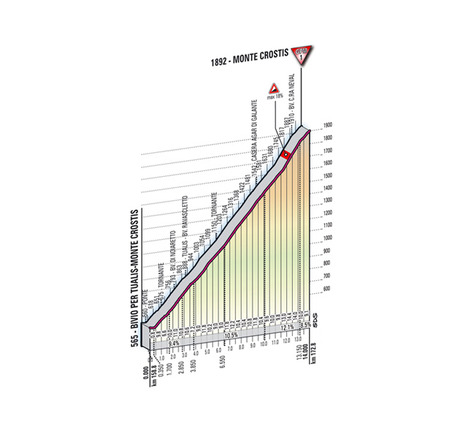 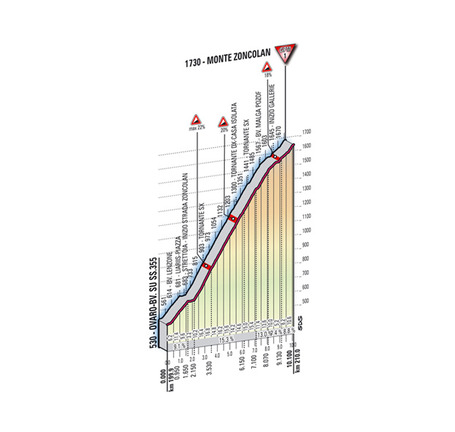