Today in It's About Time: A Maglia Rosa Power Poll!

Share All sharing options for: Today in It's About Time: A Maglia Rosa Power Poll! 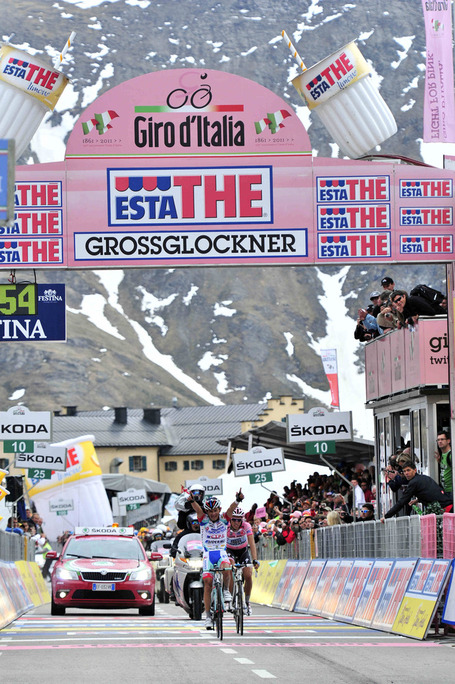 Back by popular demand...

We are on the cusp of Giro nirvana, a ride up the Zoncolan, and rather than wait for this poll's results to become painfully obvious, I thought I'd establish a baseline ranking and see where we go from here.

No need to recap his exploits to this point in the Giro, nor do we need reminding that in a three week race anything can still happen, including getting Anton'ed. Or drinking too much ice water. Remember how totally over the 2005 Giro was before Ivan Basso became unquenchably thirsty? Also, history tells us that in Italy, a foreign maglia rosa might want to bring his own personal chef. Ahem.

But assuming the best three-week climber in the world avoids anything strange, is the race over? Yes, unless he falters at the extreme gradients. No two climbs of this caliber are alike, and the Zoncolan and Finestre climbs to come have few peers in Europe. Is it possible that Contador, who has built his three-minute advantage on pretty easy climbs, might give it back on the hardest ascents?

Not too likely. Frankly, we have almost no data to work with. Only grand tours resemble grand tours, and the past two years he's only ridden the Tour, and in 2008 he rode the Giro and Vuelta. Among those races there are a handful of telling results. Last year's Col du Tourmalet stage -- Bert got second, same time as winner Andy Schleck. The previous year's Tour stage to Mont Ventoux, Contador again matched Andy Schleck, losing only to Juan Manuel Garate and Tony Martin, whom he wasn't worried about. In 2008, he smashed the competition on the Alto l'Angliru -- a very useful data point. Earlier that year he came in fourth on the Plan de Corones time trial, losing to two dopers and Gibo Simoni. Before that he had a middlin' performance on the Fedaia/Marmolada. Those results are colored by his lack of preparation prior to starting the Giro.

So for what it's worth, there is zero evidence suggesting that Contador will be any worse tomorrow than he's been up to now. Time for Liquigas to send him some complimentary pitchers of ice water.

Not gonna just list off the GC here. We have eyes, and they tell us that the only rider even on comparable climbing form to Contador is Jose Rujano. I don't recall where he threw away five minutes, but history tells us that minutes lost in the first week often have little bearing on the outcome when you have a climbers' course. The record books are full of Franco Balmamions who came from 20 minutes back to win. The modern era is probably a bit less forgiving than the 1960s but I still maintain that Rujano's 2.48 deficit to second-placed Vincenzo Nibali is nothing.

The question is, where does Rujano go from here? This is unanswerable in advance. The guy has almost no meaningful record, unless you think his 2005 performance is still relevant. The last two seasons he's raced very little in Europe, quitting ISD last year when they left him off their Giro team. He's had some big wins in South America, which certainly confirms his ability to climb, but then he also lost the Vuelta a Colombia to Sergio Henao and Oscar Sevilla, guys with no real recent track record in Europe. So Rujano's ability to get up Zoncolan, to survive for the next nine days, and to not bleed time someplace are all complete unknowns. On the plus side, there is no big, flat ITT for him to get crushed (and he's more meh than terrible anyway). Look for the "Third Best Climber in the World" to back that up some more this coming week, is my guess.

Sitting second overall, the Shark is set to swim... after a podium place anyway. It's hard to pick among the best of the rest, with very little to distinguish among Nibali, Kreuziger, Scarponi, Arroyo, Gadret, etc. So I'll give the nod to the guy with the most recent grand tour win, a strong team, unquestioned motivation, and no obvious disadvantages. Since that win in Spain -- and even further back to last year's Giro -- Nibali has done everything fairly well, and consistency counts in grand tours, a lot. But he's not the Angel of the Mountains, so tomorrow he'll be clinging to this spot just as he cling to that Red Jersey last September... by his fingernails.

Like the third spot, the fourth is up for grabs, but I'll give it to Gadret on the basis of the trend in his results. He conceded a few seconds on Etna, then grabbed them back in his stage win at Castelfidardo and again earlier today. History tells us that he hasn't gotten over the hump in a grand tour because he's a horrific cronoman, to put it charitably. That may come back to bite him next Sunday but we'll refrain from writing him off in a stage that's nine days away. At least until next Friday.

Just here for stage wins, eh? Regrettable if true, as we sit here longing for someone to put up a fight against the Bertinator 3000 machine. Remember, he had left the competition -- including Nibali -- for dead at the Vuelta before his accursed luck struck him down, and he did it in the high mountains. Prior to then we didn't have a lot of evidence regarding his abilities in the highest of high mountains. He DNF'd on the Angliru in 2008, for example, though I don't know why off the top of my head. Anyway, the Zoncolan will weed out the "stage-hunters" from the guys who are here in top form.

It's possible that Roman Kreuziger could be making the Leap in this Giro. Too much? He's been good every day, the first time you could say that at this stage of a grand tour. No doubt his limits will be tested tomorrow, and grand tours aren't over after two weeks. But there is no sign of weakness, a big step forward for the young, ultra-talented stage racer. Non-Contador fans, this is something that should keep you watching. Oh, and the white jersey comp is basically over.

Lord knows he's tried. Scarponi is probably winning some minor competition based on who looks like they're emptying their tank on the road. Of course, part of the reason for that is because as the road goes up, Scarponi's chances (relative to the elite climbers anyway) go down. He's gone searching for stage wins and early seconds, knowing that he'll need them all before long. It hasn't worked.

Arroyo's heroic effort in last year's Giro won't soon be forgotten, and seemed to carry over to the Etna stage, where he was a very respectable 5th place. In with i big today too. But there aren't enough modest mountains and gnarly descents for this Giro to ever play into his hands. Tomorrow's gonna hurt.

Disappointing start -- I believe he's been ill -- and right now J-Rod sits 14th with no results that would make you like his chances. But he's one of the few pure climbers, and if he gets it going before long he could still make a dent here.

Listed here out of habit. I suppose he didn't lose any time to the bulk of his rivals today, a big improvement. More than most of the guys on this list, he knows how to finish off a grand tour, so yeah, let's not forget Menchov just yet.